Of the 91,051 tests conducted Sunday, 7.81 percent returned positive, according to ministry numbers, the highest rate since mid-February.

There were 6,576 new cases identified on Sunday, the second day in a row the number has dropped, following 7,201 on Saturday and 8,579 on Friday. However, testing rates over the weekend tend to dip, giving lower numbers.

The virus reproduction number has also been sliding, and in Monday’s report was given as 1.1. The figure, calculated to show the situation 10 days earlier, refers to the number of people each infected person transmits the virus to. Values over 1 show infections are rising; under 1 indicates that the outbreak is shrinking.

Of the 79,625 active coronavirus cases in the country reported by the ministry on Monday, 731 were in serious condition. The death toll since the start of the pandemic last year was 6,990, with eight people having died the day before. Sunday’s grim tally was the lowest daily fatality rate for nearly three weeks.

Lockdown off the table

The number of seriously ill, though generally rising, has leveled out over the past week, a fact that Health Ministry Director-General Nachman Ash said is encouraging enough to make a lockdown over the High Holidays in September no longer under consideration.

However, Ash told the Kan public broadcaster, he is concerned that as infection figures improve, the public may drop its adherence to health orders, which, in turn, could then cause another rise in infections.

Ash admitted that ministry officials have “butterflies in the stomach” over the opening of the school year, which is scheduled for Wednesday.

He also commented on the Health Ministry’s announcement on Sunday that all Israelis over the age of 12 are now eligible for a third vaccine shot that is being pushed as a necessary booster for inoculation. The government has made vaccination a key strategy in its efforts to curb the current wave of COVID-19 infections.

“We understood that two vaccination doses can’t be relied upon for people to feel protected,” he said. “Those with two shots are less protected over time and after half a year [the decline] becomes significant.”

Ash said he hopes that over the coming month all those who had their second shot at least five months ago will get the booster dose.

Despite Ash’s optimism, an unnamed senior official at the Health Ministry told Kan that every day another 100 COVID-19 patients become seriously ill. The source said that includes those who are already hospitalized but deteriorate, along with patients in geriatric institutions, many of whom are not included in the Health Ministry daily statistics.

The official urged against starting the school year as planned, saying that alongside the expected private and public gatherings during the holiday period that includes the Jewish new year of Rosh Hashanah, Yom Kippur, and the Sukkoth festivals, such a move was likely to bring disaster to the health system. He urged further restrictions on gatherings rather than just relying on vaccinations.

After reducing daily virus infections to barely more than a dozen in mid-June Israel has experienced a surge of infections blamed on the highly contagious Delta variant. The wave has complicated preparations for the start of the school year, with some backing a delay until October in order to give vaccinations more time to have an impact. 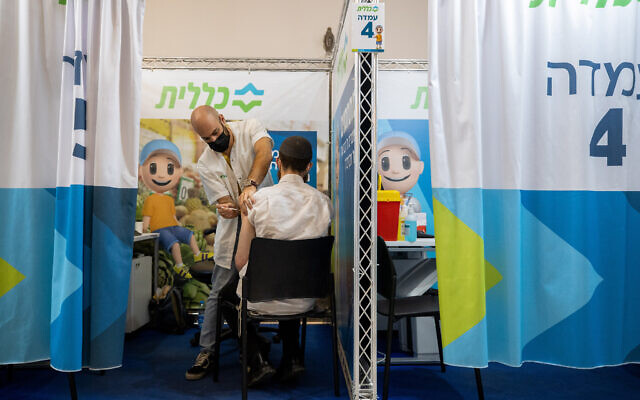 A man receives his third dose of the COVID-19 vaccine at a temporary health care center in Jerusalem, August 29, 2021. (Yonatan Sindel/Flash90)

Israel has already reintroduced some restrictions on gatherings, limiting crowds and reapplying the so-called Green Pass system that grants access to venues only to those who have been vaccinated or recovered from COVID-19 or recently tested negative for the virus.

When infection rates were still skyrocketing there had been talk among senior officials — since abandoned — of a lockdown over the holiday period to prevent traditional gatherings, which include lengthy prayers services in synagogues, from becoming a hub for COVID-19 spread.