The Islamist Ra’am party, seen as a potential kingmaker in the wake of the March 23 election, did not recommend either Prime Minister Benjamin Netanyahu or Yesh Atid leader Yair Lapid for prime minister on Monday night.

But while abstaining, Ra’am chief Mansour Abbas said that he remains open to negotiations with any candidate who is ultimately tasked with forming a government.

Abbas neither named nor rejected any of the three potential candidates named by Rivlin in consultations — Netanyahu, Lapid, or Yamina chief Naftali Bennett.

“Whomever you charge with forming the coalition, we will reach out to them,” Abbas said, adding that he was continuing his party’s attitude of being “neither in the camp of the left nor of the right.”

Ra’am, which has four seats, has previously expressed a desire to work together with either Netanyahu or his rivals — whichever offered a better deal benefiting Arab Israelis.

“We have put ourselves in a unique political position — to act to solve the problems of Arab society,” Abbas told reporters on Monday night.

But right-wing politicians in both blocs have ruled out basing a coalition on the party’s support, due to what they term its anti-Zionist stance. Others have accused Ra’am of supporting terrorists.

As of Monday night, Netanyahu received 52 recommendations, Lapid picked up 45, and Bennett had the backing only of his seven party members. 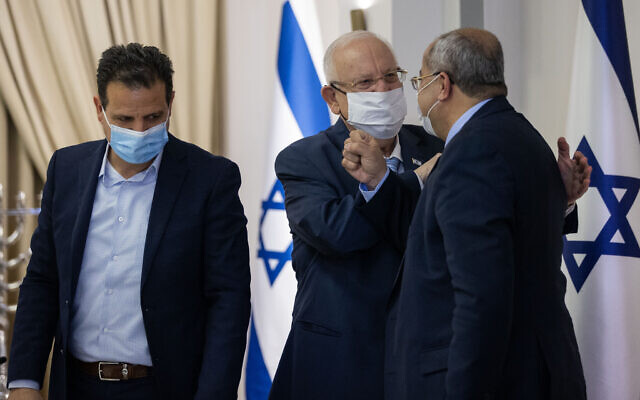 Ra’am split from the Arab Joint List last December over Abbas’s increasing move toward political independence. Since then, the two parties have been at odds, running bitter and aggressive campaigns against one another during the March elections.

But the MKs of the two factions were civil, even amicable, when they ran into one another in Rivlin’s official residence in Jerusalem’s Rehavia neighborhood. In a video captured by a journalist for the Arabic-language news outlet Panet, Joint List chair Ayman Odeh could be seen embracing incoming Ra’am MK Mazen Ghanaim.

In response to the journalist’s query, Odeh gestured at Ghanaim, saying, “That guy’s my friend.”

The Joint List’s six parliamentarians also did not endorse a candidate for prime minister. The three Arab parties that constitute the alliance — Palestinian nationalist Balad, Communist Hadash, and Ahmad Tibi’s Ta’al faction — told Rivlin on Monday night that they could not back a Bennett-led government.

“We are not part of ‘yes, Bibi,’ or ‘no, Bibi’; we are against his path. People in the anti-Netanyahu camp are on a right-wing path,” said Odeh, who chairs not only the Joint List but Hadash, its largest constituent party.

Odeh said his party opposes Netanyahu, not merely because of his corruption trial, but primarily because of Israel’s control over the Palestinians, the prime minister’s economic policies, and his attempts to undermine the country’s democracy.

But Odeh expressed his respect for Lapid, noting the Yesh Atid leader’s statement during the election campaign that the Joint List could join a coalition.

“This was a historic statement, that he would accept the Arab parties inside the government,” Odeh said. 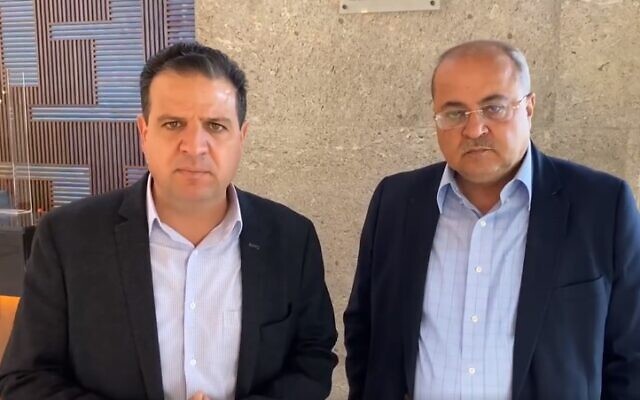 But Lapid’s emerging partnerships with right-wing parties, namely Yamina’s Bennett, means the Joint List could not endorse him, Odeh said.

He said the Joint List was still willing to eventually endorse Lapid, but only if he does not partner with right-wing parties. Lapid, however, has scant prospects of forming a government without the right-wing Yamina, New Hope, and Yisrael Beytenu factions.

Ta’al leader Tibi — whose faction has two parliamentarians in the Joint List — pronounced his decision more in sorrow than in anger. His hands had been effectively tied, Tibi implied, by New Hope, which had earlier declined to recommend any candidate despite being opposed to Netanyahu.

“Yair Lapid is a worthy candidate among the three. We wanted to get to this meeting when our votes could decide the matter. If [New Hope] had supported Lapid, and our vote were meaningful, we would have decided the matter here. I suggest you take this into account,” Tibi told Rivlin.