Police closed several roads as demonstrators filled the streets near the premier’s residence.

The protest was held two days after the deadly crush during Lag B’Omer festivities at the gravesite of the second-century sage Rabbi Shimon Bar Yochai in northern Israel.

Some protesters held signs reading: “We mourn the dead. We are furious at those responsible. Corruption kills,” referring to Netanyahu’s corruption trial.

Protesters also lit candles in memory of those who died during the stampede.

Anti-Netanyahu protesters light candles for the 45 victims who were killed in the stampede at Mount Meron during Lag B’Omer celebrations, at the weekly protest outside the Prime Minister’s Residence in Jerusalem, May 1, 2021. (Yonatan Sindel/Flash90)

The disaster which began at 1 a.m. on Friday morning, took place when huge crowds of ultra-Orthodox pilgrims were making their way along a narrow walkway with a slippery metal flooring that ended in flights of stairs. People began to slip and fall, others fell upon them, and a calamitous stampede ensued.

At least 45 people were crushed to death, including 10 children and young teenagers, and more than 150 people hurt.

Demonstrators have been holding regular protests for months against Netanyahu, demanding he resign over his trial on charges of bribery, fraud, and breach of trust.

In recent weeks protestors also called upon politicians to unite against the long-serving leader and establish a new government, in order to prevent the country from heading into a possible fifth round of elections in two years. 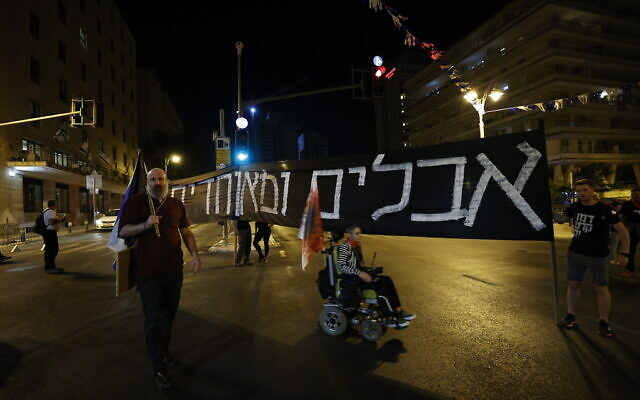 Israelis protest against Israeli prime minister Benjamin Netanyahu, outside the Prime Minister’s official residence in Jerusalem on May 01, 2021. (Yonatan Sindel/Flash90)

At its height in mid-summer 2020, the anti-Netanyahu protest movement saw tens of thousands take to the streets in Tel Aviv and Jerusalem, with thousands more at bridges and intersections across the country.

Protesters have also criticized his government’s handling of the coronavirus pandemic.

One of the largest demonstrations so far was held on March 20, in what was the final mass protest before the latest Knesset elections. Tens of thousands of demonstrators gathered in Jerusalem on that Saturday evening.

Netanyahu denies wrongdoing and claims the indictments are part of an effort by political rivals, the media, police, and prosecutors to remove him from office.

TOI staff contributed to this report.