Tensions rose in the Arab-led Joint List after one of its constituent factions skipped out on Wednesday’s Knesset vote on dissolving Prime Minister Benjamin Netanyahu’s government, deepening an internal rift in the umbrella party.

The decision by the Ra’am faction is being interpreted as a show of potential support for the premier, whose right-wing policies and alleged race-baiting have made him deeply unpopular among much of the Arab public, but whom faction leader Mansour Abbas has expressed an open willingness to work with.

“The Joint List views Netanyahu as a catastrophe — politically, socially, economically and health-wise,” the Joint List said in a statement preceding the vote on Wednesday morning.

But the four MKs in Joint List MK Mansour Abbas’s Ra’am faction — the political wing of the Southern Islamic Movement — were absent from the chambers when the Knesset voted to dissolve the government 61-56. A Likud MK who is abroad was the only other absence.

Abbas told The Times of Israel that going to elections would set back critical, tangible legislative achievements for Arab Israelis, such as a long-awaited government plan to fight organized crime in Arab communities.

“If we go to elections now, we will see the right wing take over the Knesset. Netanyahu will make a government under his control with [Yamina party leader] Naftali Bennett. The opportunity to move forward with the government plan to combat violence and crime in Arab municipalities will be lost,” Abbas said in a phone call.

The dissolution vote set the stage for the fourth round of national elections in two years as Defense Minister Benny Gantz and his Blue and White party broke from the coalition and voted in favor of the measure.

The measure must still go through  committee and pass three more readings in the Knesset before new elections are called.

Ra’am’s absence was the latest volley in a weeks-long public spat in the Joint List. Abbas’s party has rhetorically broken in recent weeks with the other three factions, which compose the bloc of Arab parties.

The party is a marriage of convenience between four Arab-led factions from across the political spectrum united mainly by their shared ethnicity and forced together by a desire to avoid falling below the Knesset’s 3.25% electoral threshold. 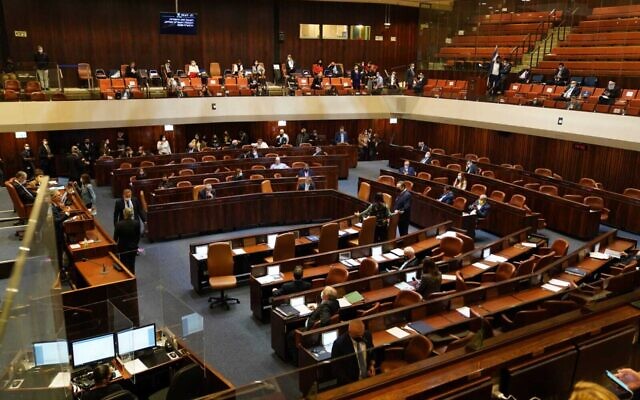 The Knesset votes on an initial reading of a bill to dissolve the government on December 2, 2020 (Credit: Knesset spokesperson)

Abbas has argued that he presents a new, pragmatic approach in Arab Israeli politics: he has shown a public willingness to normalize ties with Netanyahu, spoken warmly of Likud Knesset speaker Yariv Lavin, and suggested that he would consider sitting as a minister in a Likud government.

In exchange for working with Netanyahu, Abbas has said that he is working to get results on key priorities for Arab Israelis: the extension of a five-year funding plan for Arab municipalities and the government plan to combat organized crime in Arab Israeli communities.

“I don’t support Netanyahu, nor am I seeking to protect him. I’m trying to create change for my constituency — in fighting organized crime, in the housing crisis, recognizing the unrecognized [Bedouin] villages. There’s only premier, and that’s Netanyahu. He is the address for these demands,” Abbas told The Times of Israel.

Abbas’s critics have alleged that he is undermining the unity of the Joint List or even “serving Bibi [Netanyahu],” as Balad’s chairman MK Mtanes Shehadeh put it in a tweet last week.

It is also not clear how successful Abbas’s attempt at working with the right has been. While Netanyahu publicly pledged to the Ra’am chairman that he would bring the government plan against violence for authorization within two weeks at a Knesset committee meeting in early November, that promise has yet to be fulfilled.

Undercutting attempts at unifying the four unruly factions, the Joint List announced on Wednesday morning that it would support dissolving the Knesset “by majority vote” rather than unanimously.

“Ra’am members did not express a final position in the meeting and asked to hold additional discussions this morning. But the majority view is to vote for dissolving,” the Joint List announced in a statement.

The decision by Abbas’s faction to abstain immediately drew fire from some of his colleagues in the Joint List.

“We voted right now in favor of dissolving the Knesset. It’s the last sane decision we can make in these insane circumstances which this racist government of Netanyahu has placed before us. The decision of our friends from Ra’am not to vote constitutes a blow to the platform of the Joint List and the constituency!” Balad MK Heba Yazbak wrote on Twitter. 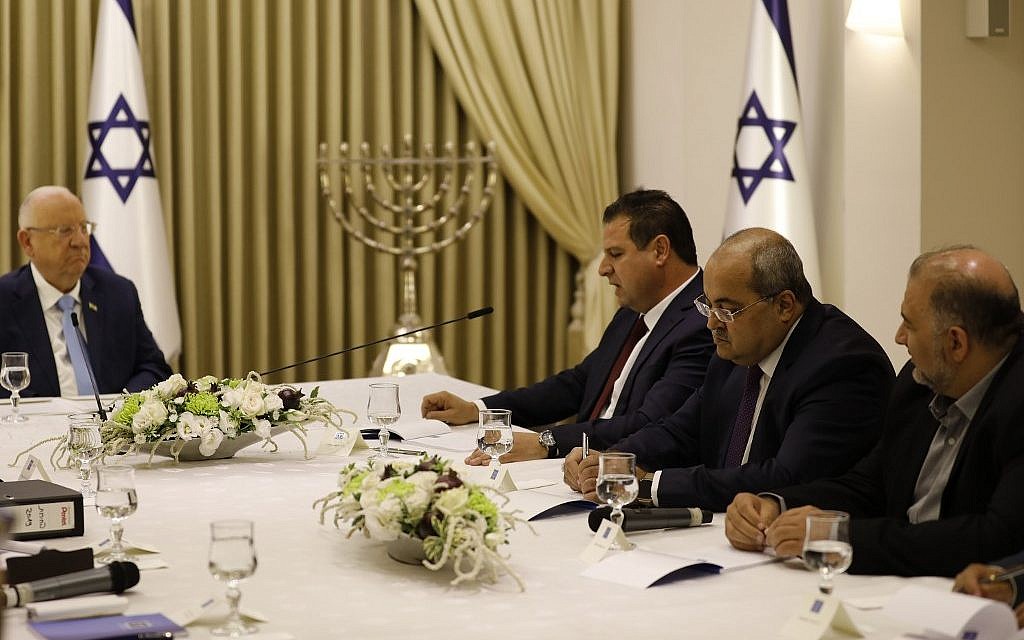 President Reuven Rivlin, left, meets with Joint List members Ayman Odeh (3rd-R), Ahmad Tibi (2nd-R) and Mansour Abbas (R) during consultations on who should be tasked with forming the next government, at the President’s Residence in Jerusalem on September 22, 2019. (Menahem Kahana/AFP)

Other parliamentarians were more circumscribed in their remarks, but still appeared to hint at Ra’am’s refusal to vote to dissolve the government.

“I will not allow the history books to say that the votes of Ahmad Tibi, or Ta’al parliamentarians, or parliamentarians from the Joint List prevented the toppling of Netanyahu,” Tibi said in a statement announcing his support for the decision to dissolve the Knesset.

The rising tension in the Joint List has raised the specter of Arab Israel’s parliamentary representatives again going their separate ways. While the relatively high 3.25% voting threshold for entering parliament has helped keep the four parties more or less together, the Joint List split due to internal divides in the September 2019 elections — with Hadash and Ta’al running together against Balad and Ra’am.

“If the [Arab] Joint List goes in the direction I’m proposing, then there’s a chance the Joint List will continue to exist,” Abbas told right-wing Channel 20.

But he then added: “If the Joint List repeats the same mistakes, the same positions that offer no vision for the Arab community, it abandons the rationale for its existence.”

Walid al-Hawashla, a senior Ra’am official, said that the Joint List ought to be able to survive the political differences raised by his faction.

“This is a political disagreement. The Joint List is composed of four parties, with four ideologies, with different political thinking. Ra’am’s decision [in the vote] ought to be respected,” al-Hawashla told The Times of Israel in a phone call.

“People want achievements on the ground. People want to live in peace, they want solutions to housing, solutions to violence,” he added, asserting that there was widespread support for Abbas’s approach to politics among Arab Israelis.

Hadash MK Yousef Jabareen acknowledged in a phone call that Wednesday’s vote had “raised tensions in the Joint List.” 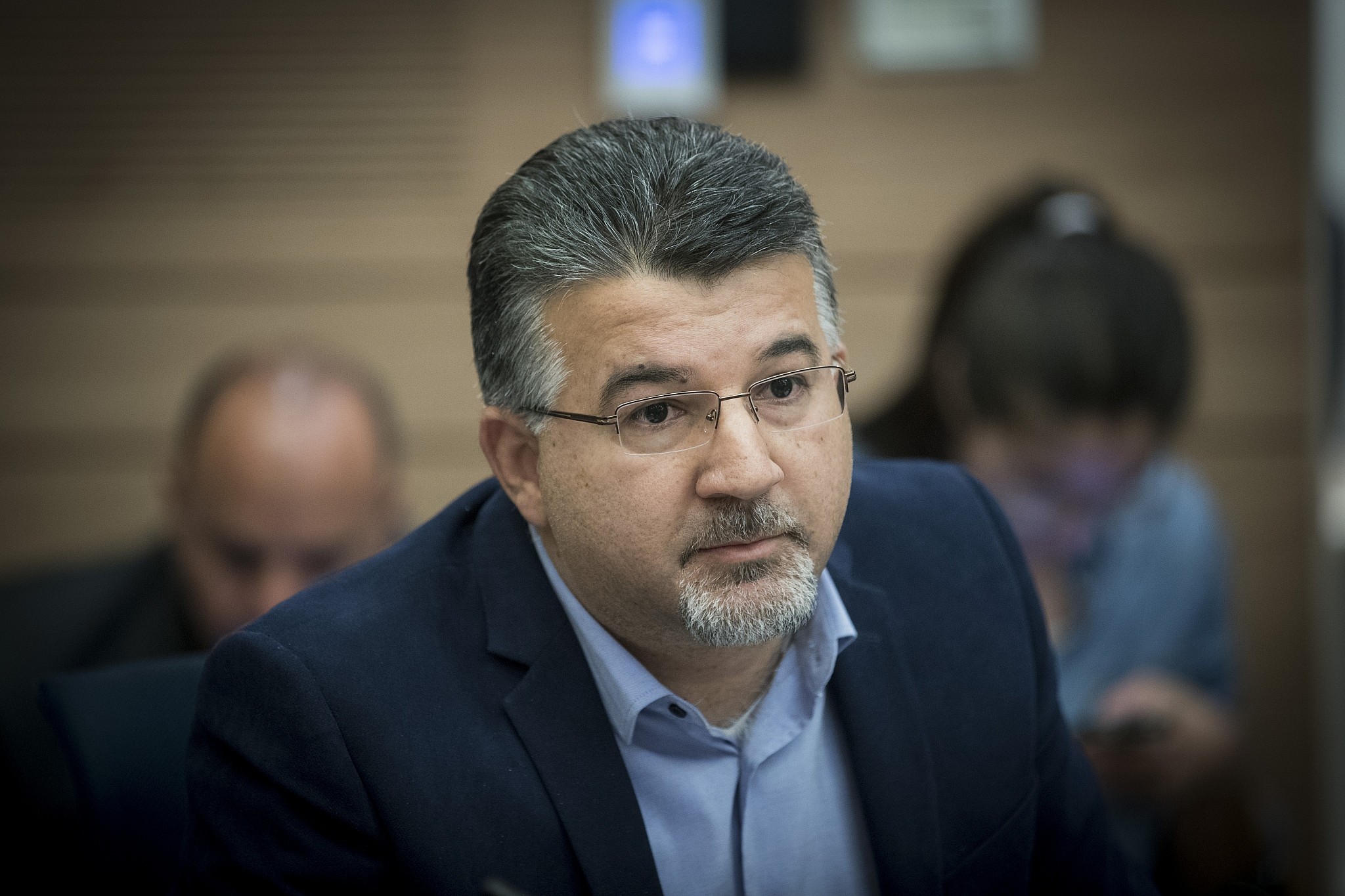 “But we are still working, hopefully, to keep the framework together. It is very important to keep one front, one list,” Jabareen said.

Jabareen said he supported “unity in diversity,” saying that many different political voices could coexist inside the Joint List.

At the same time, Jabareen said, he had made it clear to Abbas that some forms of collaboration with the government, such as supporting legislation that provided immunity for Netanyahu in his corruption trial, would be unacceptable.

In the event that elections are held, the outlook for the Joint List is uncertain. Several recent polls have shown falling numbers for the Arab coalition, from its current 15 mandates to 10 or 11 mandates in the 120-strong Knesset.

“We’ve seen the polls which indicate a backsliding in the Joint List’s strength, and the internal debates within the Joint List play a role in that. But we’re hopeful that the campaign period will allow us to gain back our power,” Jabareen said.