There were 9,589 cases of the virus found on Monday, taking the total number since the start of the pandemic past the half-million mark, with 504,269 diagnosed.

There were 74,639 active cases with 1,027 people in serious condition, including 247 on ventilators.

There were 126,584 tests carried out on Monday, with 7.6 percent returning a positive result.

Meanwhile, as the British strain of the coronavirus continued to spread, with some estimates saying it was responsible for around 2,000 cases in Israel per day, the Health Ministry was reportedly considering reducing the amount of contact time with a confirmed carrier that would send an individual into isolation.

In light of the highly contagious variant that originated in the United Kingdom, Israeli health officials were considering requiring isolation for anyone who spent five or 10 minutes with a confirmed carrier, instead of the current 15 minutes, Army Radio reported on Tuesday.

The Sheba Medical Center has already independently ruled that five minutes of contact with a carrier would require self-isolation.

The surging spread of the virus came as data showed that 1,854,055 people in Israel have now received their first dose of a coronavirus vaccine — by far the highest vaccination rate in the world, according to the Our World In Data website.

By the end of March, Israel will have vaccinated 5.2 million citizens against the coronavirus, according to a plan drawn up by the Health Ministry. 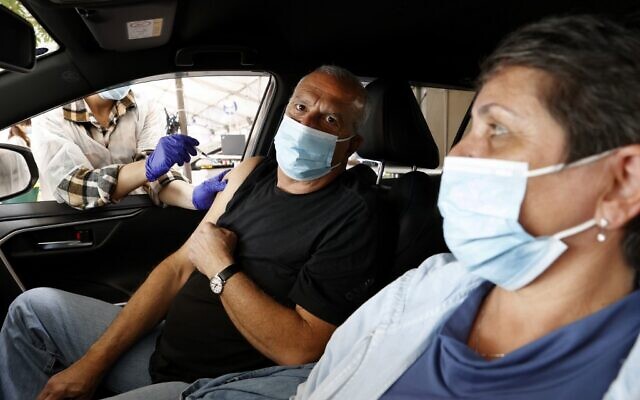 Health officials told Channel 12 Monday that based on the recent agreement reached with the Pfizer pharmaceutical company, each week will see shipments of hundreds of thousands of vaccine doses land in Israel.

If Pfizer meets all of its benchmarks in vaccine shipments, 5.2 million Israelis will be vaccinated by March 20, according to the Health Ministry plan. That date also happens to be three days before the parliamentary election. Prime Minister Benjamin Netanyahu, who is on trial for corruption charges, has made the country’s vaccine drive the focal point of his reelection campaign. 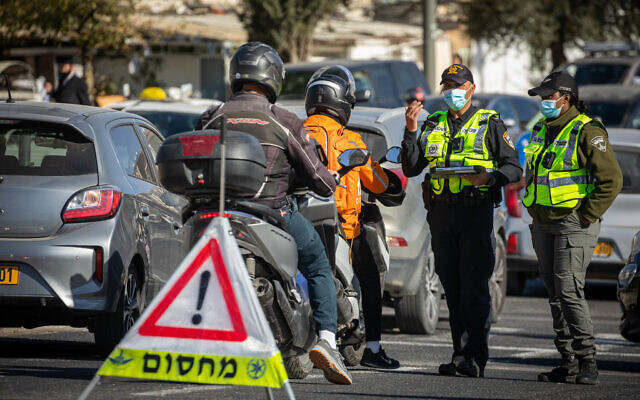 Police at a temporary roadblock in Jerusalem on January 11, 2021, during a 3rd nationwide full lockdown, in an effort to prevent the spread of the coronavirus (Olivier Fitoussi/Flash90)

The Health Ministry is also planning to introduce vaccination certificates as the county readies to reopen the economy.

Meanwhile, sources in the Health Ministry told the Kan public broadcaster Monday that the exit from Israel’s latest tightened lockdown, imposed Friday, will be gradual and depend on the vaccination rate and the trend seen in serious COVID-19 cases.

Even once the current closure expires — the date is currently set for January 21 — the economy won’t fully reopen immediately, the Health Ministry sources added.