After unveiling his proposal to reform kosher supervision, Religious Affairs Minister Matan Kahana is now working on a plan to liberalize conversions to Judaism, according to a report Wednesday.

Kahane’s proposal would allow for conversions outside the auspices of the Chief Rabbinate, authorizing municipal rabbis to perform the religious rite, the Kan public broadcaster reported.

Work on the plan is advanced and it could be released to the public within two weeks, the report said.

“This is on the agenda. According to the coalition agreement, municipal rabbis will return to converting,” Kahana’s aide, Rabbi Shay Weissman, said in an interview with the broadcaster.

Currently, there are only several dozen rabbis and four conversion courts that can legally perform conversions to Judaism throughout Israel.

In 2015, the government repealed an initiative passed a year earlier by now-Foreign Minister Yair Lapid’s Yesh Atid party, that set up as many as 30 courts made up of municipal rabbis that would have been approved to conduct conversions. It also canceled a measure allowing prospective converts to choose their conversion court.

The building of the Chief Rabbinate of Israel in Jerusalem. (Flash90)

Kahana’s new legislation is expected to follow the same principles of creating friendlier, more streamlined conversion procedures. It would likely enable potential converts, especially among Russian-speaking relatives of Jews who immigrated from the former Soviet Union, to bypass any state rabbi who refuses to convert them and find a rabbi who will.

The report comes after Kahana on Tuesday unveiled a plan to overhaul Israel’s kosher certification industry, sparking backlash from the Chief Rabbinate and ultra-Orthodox lawmakers.

“The kashrut system of the State of Israel needs to be significantly streamlined,” said Kahana in a video announcing the proposed reforms. “The revolution I am leading will strengthen the Chief Rabbinate and create competition that will improve kashrut, as well as lower the price of kosher certification for businesses.”

The plan released by Kahana would establish a series of private kosher certification agencies that will be required to uphold religious standards established by the Chief Rabbinate.

The private agencies will be authorized to issue certifications that note they are “under the supervision of the Rabbinate.” Each agency is expected to be headed by a rabbi who is certified by the city’s local rabbinate. The agencies — which will also need to demonstrate financial viability — will make public the religious standards they are maintaining in their certification. 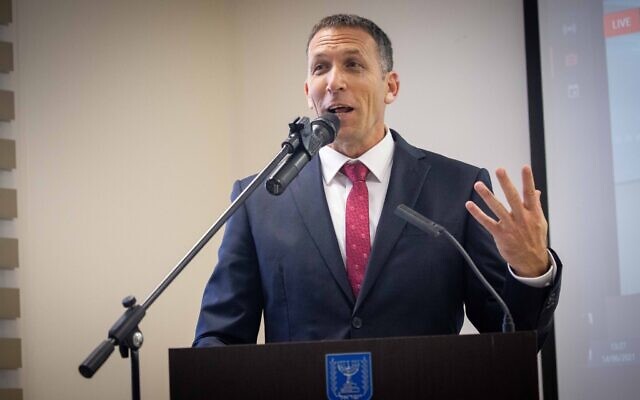 The proposed plan would also see the creation of an overarching supervisory body of the Chief Rabbinate to monitor the private agencies and ensure they uphold the standards they have promised to meet.

According to the plan, however, if an agency wants to issue a certificate with a lower level of kashrut than the Chief Rabbinate, it can do so with the approval of three city rabbinate-approved rabbis, and issue a different certification — including one that can be given to restaurants open on Shabbat.

The Chief Rabbinate has long resisted any reforms to its monopoly over both kosher certification in Israel and the conversion process.

The Chief Rabbinate itself issued a statement rejecting Kahana’s kosher supervision plan, calling it “a dangerous initiative to destroy kashrut in Israel.” According to the rabbinate, the proposal “would mean the end of kashrut in the state and the creation of a ‘bazaar’ of groups with impure motives that will begin handing out certification.”