A crude oil tanker sailing under a Greek flag and currently anchored off Cartagena in Spain has been named by an Israeli news outlet as a suspect in the oil spill disaster that has covered most of Israel’s Mediterranean beaches in tar.

The Kan public broadcaster reported Monday that the Greek-owned Minerva Helen, which started its working life in 2004, was suspected in this month’s incident and had previously been involved in a major oil spill just off Copenhagen, Denmark, in January 2008.

That earlier spill, of 200 tons of oil, (just over 200,000 liters) took place when a hose broke while oil was being loaded onto another vessel.

Approached by Kan, the Greek company that owns the ship denied any involvement in the suspected spill off the coast of Israel, saying, “We are not the source of the leak,” and additionally denying responsibility for the incident off the Danish coast.

Channel 12 news said that European organizations helping Israel with inquiries could pinpoint the suspect “possibly soon” and those responsible could be indicted.

Photographs of tar contamination along Israel’s northern beaches, taken from a helicopter by Israel Nature and Parks Authority Director, Shaul Goldstein, on February 22, 2021.

On Monday evening, a cabinet meeting to discuss emergency funding for the cleanup saw political mudslinging and the refusal of the Finance Ministry to approve the Environmental Protection Ministry’s request. The meeting ended without a decision and a phone vote was expected to take place later on Tuesday.

Reports of the pollution on Israel’s coast emerged on Thursday when a dead 17-meter baby fin whale washed up on Israel’s southern coast, along with other wildlife. 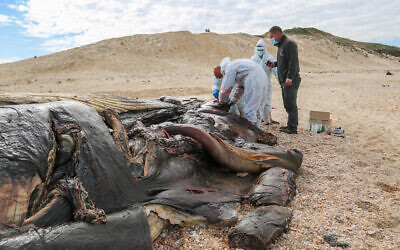 Marine veterinarians take samples from a 17-meter fin whale washed ashore on the Nitzanim beach, near the city of Ashkelon, February 21, 2021. (Flash90)

The government on Sunday advised Israelis to avoid all Mediterranean beaches from north to south due to the pollution.

The INPA estimated that a long period will be needed to clear the tar contamination from the beaches and the rocky areas, including the abrasion platforms that serve as habitats for many marine creatures. These are areas of bedrock that extend out from the foot of coastal cliffs into shallow waters.