Israel has continued to allow and even encourage cyber-surveillance companies to secretly work with Saudi Arabia, despite recurring reports that Israeli tech was being used to clamp down on dissent and target opposition figures, including possible ties to the killing of dissident journalist Jamal Khashoggi, The New York Times reported Saturday.

However, the Israeli government encouraged it and two other firms to keep working with the Saudis. A fourth firm was also reportedly given a license to work with Saudi Arabia.

According to the report, one of the firms given permission by the Defense Ministry to work with Saudi Arabia was Candiru. On Thursday, Microsoft said it issued a software update to block spy tools developed by the firm that were allegedly used to snoop on over 100 people worldwide, including dissidents, activists and journalists.

The other two firms named in the report that have licenses to work with Saudi Arabia are Verint and Quadream. The latter was said to have begun working with Riyadh following the Khashoggi killing.

The report said the Saudis are continuing to use Israeli-made spyware to monitor opponents of the regime.

The Defense Ministry told the Times in response that it will revoke the license of any company whose wares are used to violate human rights, while declining to discuss specific licenses it has issued.

The Pegasus software infects individuals’ phones by sending them text messages that tempt them to click an attached link. If the target clicks on the link, the company gains full control over the phone, including its contents and history, and the ability to activate its microphone and camera at will.

The company says it provides its software to governments for the sole purpose of fighting terrorism and crime.

NSO Group has denied reports that its technology may have been used by the Saudis to target Khashoggi, a United States resident and Riyadh critic who wrote for the Washington Post.

Khashoggi was murdered and his corpse dismembered inside the kingdom’s consulate in Istanbul on October 2, 2018. He had gone to pick up paperwork needed for his upcoming marriage to his Turkish fiancee.

After evidence emerged that the killing was done by a team of Saudis sent from Riyadh and closely linked to the Saudi crown prince, the international community demanded a transparent investigation.

The Biden administration in February released a declassified intelligence report concluding that Mohammed bin Salman, the powerful son of the aging King Salman, had authorized the team of Saudi security and intelligence officials that killed Khashoggi. The prince has denied knowledge of the incident.

After an opaque trial in Saudi Arabia, five Saudis were sentenced to death and three to prison terms. The death sentences have since been commuted. 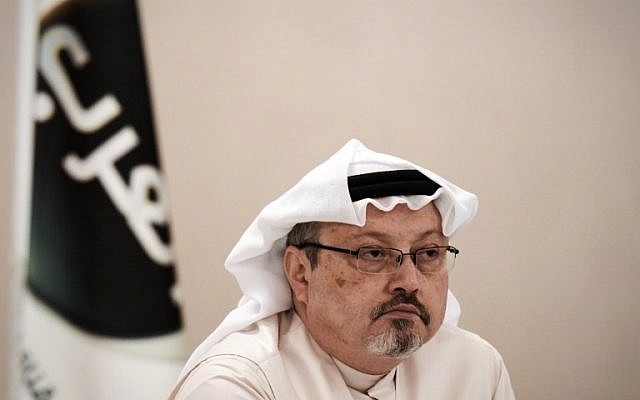 In this photo taken on December 15, 2014, Jamal Khashoggi looks on at a press conference in the Bahraini capital Manama. (AFP/Mohammed Al-Shaikh)

In December, tech giants Google, Microsoft, Cisco and Dell joined Facebook in a legal fight against NSO Group, filing a brief in an American court accusing it of having “powerful, and dangerous” technology.

In December, cybersecurity watchdog Citizen Lab reported dozens of journalists at Al Jazeera, a Qatari state-owned media company, were targeted by advanced spyware, in an attack likely linked to the governments of Saudi Arabia and the United Arab Emirates.

Most unnerving to the investigators was that iMessages were infecting targeted cellphones without the users taking any action. Through push notifications alone, the malware instructed the phones to upload their content to servers linked to the NSO Group, Citizen Lab said, turning journalists’ iPhones into powerful surveillance tools without even needing to get users to click on suspicious links or threatening texts.