With the so-called change government set to be sworn in Sunday, unseating longtime Prime Minister Benjamin Netanyahu, a disagreement about oversight of Palestinian construction in the West Bank’s Area C was reportedly erecting last-minute obstacles.

According to the Tuesday report, Gideon Sa’ar’s New Hope party is demanding the formation of a new body to oversee the sensitive matter of enforcement of alleged illegal construction by Palestinians in the West Bank’s Area C, which constitutes some 60 percent of the territory and is under full Israeli security and civil control.

New Hope says this was agreed to as part of its deal when it joined the new government. Gantz objects to this, as the matter is traditionally under his ministry’s Civil Administration.

Then-IDF Chief of Staff Benny Gantz and then-Education Minister Gideon Sa’ar speak to students and teachers at a high school in the neighborhood of Pisgat Ze’ev in Jerusalem. June 10, 2012. (Miriam Alster/FLASH90)

Channel 12 news reported that officials from both New Hope and Gantz’s Blue and White were claiming their party’s position on the matter had been accepted.

The network cited sources involved in the negotiations as saying New Hope MK Ze’ev Elkin was attempting to veto the matter and warned that “without this, the government won’t be formed.”

Gantz associates were cited saying the pressure was pointless since the issue of construction enforcement has always been under the Defense Ministry. He also reportedly noted that coalition parties had agreed to set aside contentious issues relating to diplomacy due to the vast ideological differences between them. The emerging coalition comprises right-wing, centrist, leftist and Arab parties. 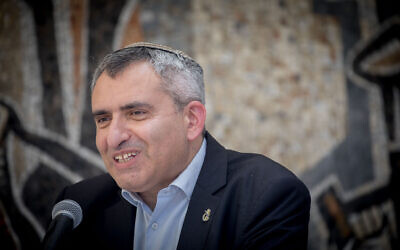 Zeev Elkin, at the time leaving his position as environmental protection minster, speaks at a ceremony at the Ministry of Environmental Protection in Jerusalem on May 18 2020. (Yonatan Sindel/Flash90)

New Hope sources subsequently told the network there was no disagreement surrounding enforcement policy, only regarding the body that will be in charge of it.

They said the gaps were “bridgeable.”

The disagreement came as Knesset Speaker Yariv Levin announced Tuesday that a vote would be held to confirm the new “change government” during a special parliamentary session on Sunday, a day before the deadline set by law.

The eight-party alliance, headed by Bennett and Yesh Atid leader Yair Lapid, anticipates winning the vote 61-59, after wavering Yamina MK Nir Orbach said Tuesday he would back the new coalition.

Many details on the guidelines and policies of the emerging coalition and the various coalition deals were made public Monday night.