Ra’am Knesset Member Said al-Harumi has reportedly warned his party that he could break ranks with his faction and quit the coalition, potentially complicating the life of Prime Minister Naftali Bennett, Channel 13 news reported Friday.

The report said al-Harumi could either quit the four-seat faction while remaining in the Knesset, or leave the Knesset altogether — a preferable option for the coalition as it would bring the party’s next in line into parliament, who would likely not rebel against the rest of the faction.

The new government has a razor-thin 61-59 majority over the opposition in the Knesset.

Al-Harumi, a Bedouin from the Negev, is believed to be primarily concerned about communities there, and Israeli demolitions of illegal construction.

The MK surprised observers on Sunday when he refused to vote with the rest of his party on a confidence motion that installed the new government, replacing Likud leader Benjamin Netanyahu after over a decade in power. The move came in response to the planned demolitions of Bedouin homes in the Negev, which he opposes.

Al-Harumi’s abstention caused the government to be approved 60-59, rather than 61-59.

Ra’am chief Mansour Abbas later said al-Harumi’s protest vote was coordinated in advance and that coalition leaders Naftali Bennett and Yair Lapid had been aware of it. In addition, he said al-Harumi had been ready to back the government if there had been any chance it would not pass the vote.

He also assured his coalition allies that al-Harumi would fall in line and vote with the party in the future.

But the episode served as an illustration of the issues the coalition will face in trying to legislate while keeping its eight disparate parties together. Aside from Ra’am, an Islamist faction that made history by being the first independent Arab party to join a governing coalition, the coalition is made up of a wide spectrum of parties from the right and left, led by nationalist hawk Bennett.

Ra’am has raised its own objections to the government’s first major legislative move — an extension of a 2003 law barring Palestinians from gaining citizenship by marrying Israelis. 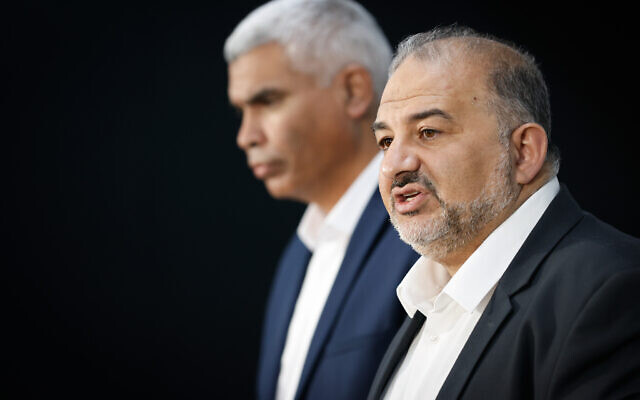 Mansour Abbas, head of the Ra’am party, gives a press statement after meeting with Israeli president Reuven Rivlin at the President’s Residence in Jerusalem on April 5, 2021. (Yonatan Sindel/Flash90)

But a 2003 measure, passed due to concerns it was being abused by terror groups to gain access to Israel, put limits on the process, making it harder for Palestinians to gain Israeli citizenship or residency through marriage. The controversial law has been extended every year since, usually with strong backing from Likud and other right-wing parties.