An Iranian-flagged ship in the Red Sea was targeted Tuesday in a missile strike near Yemen, according to unconfirmed reports in Arabic-language media.

According to Israel’s Channel 12, the Saviz is used by Iranian forces operating in the Red Sea, and disguises itself as a cargo ship.

There was no official confirmation of the reports.

Israel and Iran have accused each other recently of attacking a number of merchant ships, damaging them with explosives. The vessels in each case were only lightly damaged and there were no injuries in the incidents.

The operation seemed to have been carefully planned, and mirrored a series of attacks on tankers in 2019 and an Iranian campaign against shipping vessels four decades ago.

The Wall Street Journal reported last month that Israel has targeted at least 12 ships bound for Syria, most of them transporting Iranian oil, with mines and other weapons.

The alleged attacks mark a new front in the shadow war between Israel and Iran.

Iran, whose leaders have repeatedly called for Israel’s demise, backs the Hezbollah terrorist group, as well as terror groups in the Gaza Strip.

The Israeli military has launched hundreds of airstrikes in Syria since the start of the civil war in 2011 against moves by Iran to establish a permanent military presence in the country and efforts to transport advanced, “game-changing” weapons to terrorist groups in the region, principally Hezbollah. 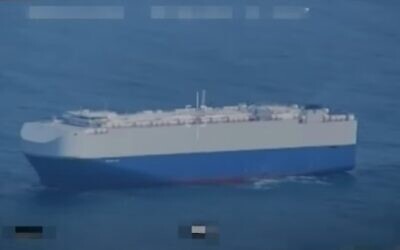 Screen capture from video allegedly showing Iranian drone footage of an Israeli-owned cargo ship that suffered damage from a mysterious explosion in the Persian Gulf. (YouTube)

Iran has blamed Israel for a recent series of attacks, including a mysterious explosion last summer that destroyed an advanced centrifuge assembly plant at its Natanz nuclear facility and the killing of Mohsen Fakhrizadeh, a top Iranian scientist who founded the Islamic Republic’s military nuclear program two decades ago.

Tensions have heated in the Middle East in recent months, as Iran repeatedly violated the terms of its 2015 nuclear deal with world powers ahead of possible talks with the Biden administration.