Residents of Israeli communities within four kilometers of the Gaza Strip were instructed on Thursday afternoon to remain in bomb shelters until further notice as terror groups in the coastal enclave continued to launch barrages of rockets at civilian areas.

After an eight-hour lull, rocket sirens began ringing almost non-stop from 9 a.m. Thursday through the evening hours, even as reports of a ceasefire began picking up steam.

The rocket fire was reaching well beyond four kilometers (2.5 miles) from the Gaza border, but residents further away from the Strip have more time to find shelter before impact. Beersheba, the coastal city of Ashkelon and surrounding areas continued to bear the brunt of the attacks.

One Ashkelon resident was lightly injured by glass shattered by the blast from a rocket that fell in the city. The 26-year-old was taken to the city’s Barzilai Medical Center for treatment, the Magen David Adom ambulance service said.

The IDF’s Home Front Command on Thursday afternoon extended its current restrictions — which include school closures throughout southern and central Israel — through Friday evening.

Amid growing concern over the numbers of people living without bomb shelters or protected areas in their homes, the head of the Home Front Command said Friday that his unit is responsible for regulations but that implementation lies with the state as well as individuals.

“Protection is a national project that cannot be led by the local authorities or residents. More than 70% of citizens have standard protection. In the communities surrounding the Gaza Strip, everyone is protected at home,” Maj. Gen. Ori Gordin told the Kan public broadcaster. “The Home Front Command is responsible for regulation and criteria, but the realization of this protection is on the state as well as citizens.”

“It is necessary to significantly improve protection in Ashkelon, Netivot, Ashdod and Ofakim,” he said. 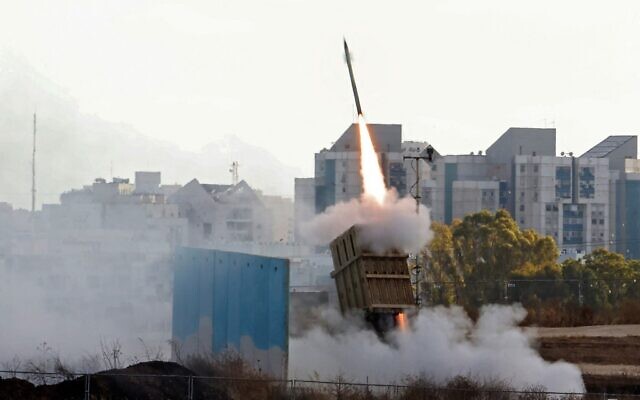 Israel’s Iron Dome aerial defense system is launched to intercept a rocket launched from the Gaza Strip, above the southern city of Ashkelon, on May 17, 2021. (Ahmad Gharabli / AFP)

There has been increasing awareness since the start of the current round of violence that large numbers of people do not have shelters or reinforced areas in their homes and do not have enough time to reach public shelters when they hear a rocket alert siren.

The elderly, people with disabilities and those living in unrecognized Bedouin encampments in the south of the country have been particularly vulnerable.

Meanwhile, amid growing talk of an imminent ceasefire, Defense Minister Benny Gantz said Thursday Israel is prepared to expand its air campaign in Gaza, if necessary.

“We are prepared and willing to expand the operation as needed,” said Gantz.

“We are taking Hamas on a journey back in time — a journey from which we will not allow it to return,” the defense minister added, referring to Israel’s bombing of the terror group’s military infrastructure. 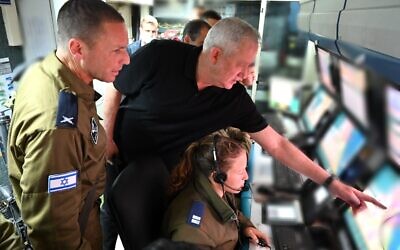 Al Jazeera reported Thursday evening that the Israeli government had notified Egyptian mediators that it was prepared to end the Gaza operation, dubbed Guardian of the Walls.

Earlier in the day, Hamas operatives fired an anti-tank missile at an IDF bus north of the Gaza Strip moments after it had been filled with troops.

The bus, which was parked outside the Zikim army base on the Gaza border south of Ashkelon, took a direct hit, with the missile smashing through its bulletproof protection and destroying its rear section.

Some 10 soldiers from the Paratrooper’s Brigade had been aboard the bus just minutes before the attack, having returned from an operative mission in the area. They were dropped off inside the base before the bus exited its front gate and stopped just outside.

The IDF confirmed the attack, saying the bus was empty when it was hit. A soldier standing nearby was lightly injured by shrapnel and taken to nearby Barzilai Medical Center for treatment, the hospital said.

The driver of the bus was in his seat when the missile struck, but somehow came out unscathed.

It was the second anti-tank guided missile attack directed at IDF soldiers on the border in this campaign. In the first such strike last Tuesday, IDF soldier Staff Sgt. Omer Tabib was killed when a missile struck his jeep and two other servicemen were injured, one seriously and one moderately.

Hamas releases a video of its ATGM attack toward an empty IDF bus on the Gaza border this morning. pic.twitter.com/YhHYetfqzJ

Throughout the day, the IDF said it destroyed a number of Hamas targets in the Gaza Strip, including an attack tunnel, command-and-control center and two underground launchpads.

The latest attack came as a lull of several hours was broken Thursday morning with multiple waves of rocket and mortar attacks on Israeli communities near the Gaza border.

No direct injuries were reported from the projectiles.

In the Thursday morning attacks, multiple rounds of mortar and rocket fire were directed at Israeli communities near the Gaza Strip beginning just before 9:30 a.m., with a mortar attack on the communities of Nirm and Ein Hashlosha.

From 7 p.m. Wednesday until 1 a.m. Thursday, some 80 rockets and mortar shells were fired from the Gaza Strip toward Israel, with 10 of them falling short of the border and landing within the Palestinian enclave, the IDF said Thursday morning. According to the military, roughly 90 percent of the rockets heading toward populated areas were intercepted by the Iron Dome missile defense system.

No direct injuries were reported in the late-night attacks, save for a man in his 50s who injured himself on a bomb shelter door and a 14-year-old girl who fell while running for cover. Both sustained minor injuries, according to the Magen David Adom ambulance service, and were taken to Soroka Medical Center in Beersheba for treatment. 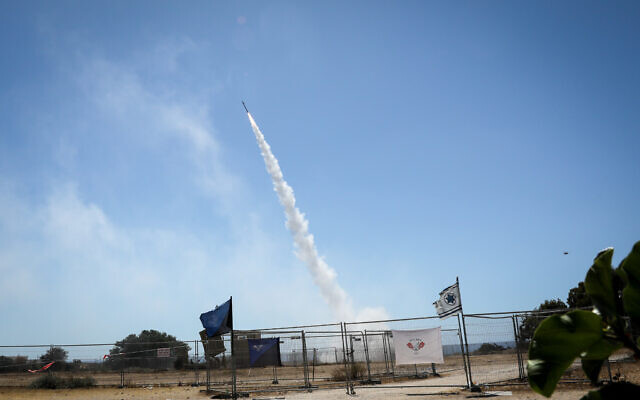 Iron dome anti-missile system fires interception missiles as rockets fired from the Gaza Strip to Israel, in the southern Israeli city of Ashkelon, May 19, 2021. (Olivier Fitoussi/Flash90)

There has been increasing international pressure for the sides to agree, via mediators, on a ceasefire.

On Wednesday, US President Joe Biden told Prime Minister Benjamin Netanyahu in a phone call that he expects “a significant de-escalation today on the path to a ceasefire,” as Washington stepped up pressure on Jerusalem to end the fighting.

Yet, the IDF believes that Hamas is trying to score a “major success,” such as a cross-border attack or other major assault, which it can fete as a victory over Israel, a senior officer in the military’s Southern Command told reporters on Wednesday.

Hamas and other Gaza terror groups have launched nearly 3,700 rockets at Israel since May 10, at times forcing people living near Gaza into bomb shelters around the clock. 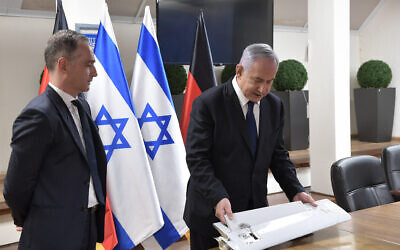 Prime Minister Benjamin Netanyahu, right, shows visiting German Foreign Minister Heiko Maas fragments of a drone that Israel says was launched by Iran toward northern Israel, which was brought down by the Israeli military, on May 20, 2021. (Kobi Gideon/Government Press Office)

Israel, in response, launched an extensive bombing campaign in the Strip. The humanitarian crisis has deepened in the impoverished Strip, with the UN saying 72,000 Palestinians have been displaced.

On thursday, Gaza’s Hamas-run health ministry updated the death toll in the Strip to 232, including 65 minors. It was not immediately clear if the ministry tally included all of those killed or if there were Hamas operatives not included in the count.

According to the IDF, more than 120 of those killed were members of Hamas and over 25 were members of the Palestinian Islamic Jihad as of Monday night. The IDF says some of the Gaza civilian fatalities were killed by the terror groups’ own rockets falling short and exploding in Gaza.