A number of people were rescued on Saturday morning as rainfall caused floods in several parts of Israel as the country was hit by a storm front.

People were extricated from their homes and vehicles after heavy rainfall caused flooding in the coastal cities of Tel Aviv, Haifa and Ness Ziona, according to Hebrew-language media reports.

Police said that Tel Aviv’s Rokah Boulevard, Herbert Samuel and Allenby Street were closed due to flooding, and advised motorists to find “alternative and safe” routes.

Flood warnings were issued for the Judean Desert and Dead Sea area.

Meanwhile, Mount Hermon in the north of the country saw its first snow flurries of the winter season.

On Friday the rainy weather was accompanied by strong winds, with a tree collapsing onto a car in the central city of Petah Tikva. There were no reports of injuries.

Some of Friday’s most severe flooding was in the north in Wada Ara, where footage aired by Channel 12 news showed a street filled with water. Streets were also flooded in the Druze town of Daliyat al-Karmel. 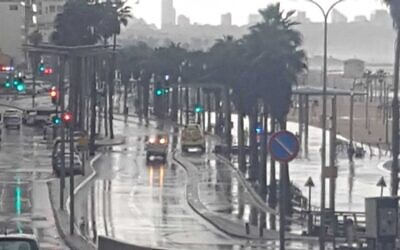 In the south, parts of Route 90 were closed in both directions due to flooding. Police directed drivers to take alternative routes.

Last winter, downpours in northern Israel broke a 51-year record within a two-week period. The generous rainfall in the north raised the level of the Sea of Galilee by 19.5 centimeters (7.7 inches) and ended a five-year drought that plagued the area.

The deadly flooding claimed the lives of seven people in Israel.

The Agriculture Ministry announced in August that it would be investing NIS 146 ($43) million to upgrade drainage facilities across the country, although it was unclear how much had been implemented ahead of the winter.

Scientists warn that climate change will lead to less rain in Israel but to more extreme downpour events causing flooding.