Israel’s political arena this week experience a surge in the number parties declaring their intent to run in the March elections, potentially splintering the vote on both the left and right, and threatening to extend the two years of political paralysis that has brought with it four national polls.

With a number of new parties declaring independent runs in recent days, the total number of confirmed slates earnestly seeking Knesset seats is now close to 20.

The political pandemic seemed to start on the right, with MK Gideon Sa’ar breaking away from Likud to form his own New Hope party soon after the elections were announced, but it quickly spread, with a total of 10 parties now apparently battling for voters on the center-left.

In an attempt to end the political chaos, politicians and pundits alike are eyeing a possible antidote — a range of different mergers across the political spectrum that could help at least some of those parties avoid political death, which would happen if the vote leaves them below the electoral threshold.

On Monday, Bezalel Smotrich’s newly named Religious Zionism party became the latest addition to the crowded field, with Smotrich confirming that he would not run again with the right-wing Yamina party.

“Me and Naftali Bennett are separating,” Smotrich told Channel 12 news.

A day earlier, former defense minister Moshe Ya’alon launched the campaign of his Telem party, after confirming its split from Yesh Atid. In the previous election, the two ran on a joint slate with Benny Gantz’s Israel Resilience party, an alliance known as Blue and White.

That party broke apart when Gantz decided to enter a coalition with Prime Minister Benjamin Netanyahu in May 2020, citing the need to prevent a fourth consecutive election by forming a unity government that could tackle the health and economic crises caused by the coronavirus pandemic. Blue and White became part of the government, while Yesh Atid and Telem opted to stay together in opposition.

Currently, the three will be running on separate slates in March, all seeking a similar pool of centrist voters who do not — to varying degrees — want to see Netanyahu remain prime minister.

And they will be joined by a crowded field of other parties, mainly new ones, representing a range of different opinions and issues on the center-left of the political spectrum.

Along with the longstanding left-wing Meretz party, Tel Aviv Mayor Ron Huldai is seeking to make a dent with his new party, The Israelis, which he launched last month alongside Avi Nissenkorn, the former justice minister who bolted Gantz’s Blue and White.

According to the latest opinion poll, despite a range of new options for the Israeli voter, the abundance of parties does not appear to be on the way to providing political stability. In fact, as things stand, it could even set the stage for yet another election.

Netanyahu’s Likud would pick up 27 seats if voting were held today, down from its current tally of 36 and slightly down from the some 30 seats predicted for the Likud in recent polls, a Radio 103FM survey that aired Monday morning found. 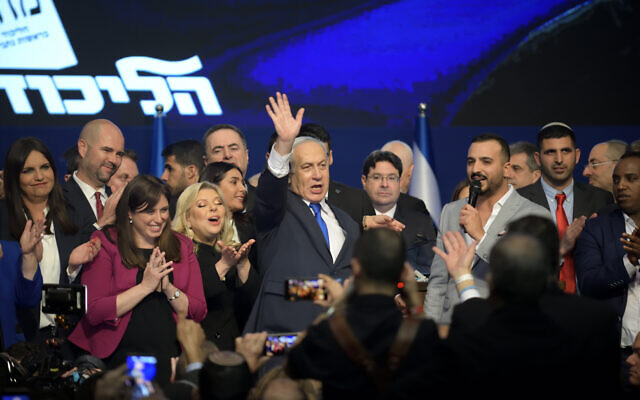 The poll indicated that the second-largest party would be New Hope, with 17 seats, followed by Naftali Bennett’s Yamina with 14 and Yesh Atid with 13. The predominantly Arab Joint List would shed support, slumping in the poll from its current 15 seats to 10 seats.

Next in the poll was Huldai’s The Israelis, with five seats, down from previous surveys since the party’s formation.

Both Meretz and Blue and White — which has hemorrhaged support since he formed a coalition with Netanyahu in May 2020 — were predicted to barely scrape past the minimum voting threshold and pick up four seats, as would Smotrich’s Religious Zionism. The Labor party, which led the country for decades, would not cross the threshold.

Crucially, even with a boost from Smotrich crossing the electoral threshold, Netanyahu and his allies on the religious right would win 60 seats, still short of the 61 seats needed to form a coalition.

Parties seeking Netanyahu’s ouster would therefore also have 60 seats between them, not enough for a majority. Moreover, with factions ranging from the Joint List to the right-wing New Hope, it is far from clear that they could overcome their differences to form a government, even if they did gain enough seats. 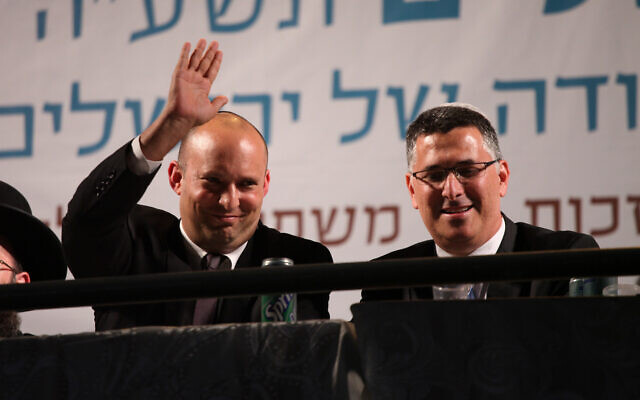 Parties have until February 4 to finalize their slates of candidates and any mergers or establishment of new factions before then could help shore up the political blocs on both sides, regardless of ideology.

Gantz, for example, has been reported to be considering a merger with either Bennett on the right or Huldai on the left.

Gantz on Monday called for an alliance of multiple parties that oppose the continued rule of Netanyahu, saying he would be willing to give up leadership of such a bloc in order to achieve unity.

He urged leaders of a number of center-left parties to come to a meeting in order to “search for and find the way.”

“This is an hour of emergency. We cannot let [Netanyahu] smash us into slivers of parties,” he said.

Huldai has himself said that other parties that “share the same values” are welcome to join. On Monday Ofer Shelah, who recently splintered from Yesh Atid to form the Tnufa party, publicly called on Huldai to consider a merger.

“A little more than two months before election day, the political map is hazy, but the center-left bloc is shattered,” Shelah said in a statement. “I call on Ron Huldai, Avi Nissenkorn, and the leaders of the Labor party: Let us sit together. You all know me. There are no preconditions. Let’s negotiate and form the body that an entire camp yearns for.”

According to the Radio 103 poll, if New Hope, Yamina, Yesh Atid and Yisrael Beytenu were to run together as a unified slate, they could gain up to 42 seats, trouncing Likud’s 30.

In that light, Channel 12 news speculated Monday that New Hope and Yamina were planning a possible merge in a move that could shake up the right, and potentially unseat Netanyahu.