Human rights activist Rabbi Arik Ascherman was beaten by a masked Jewish settler near an illegal outpost in the West Bank on Wednesday, in an attack captured on video.

The film shows a man assaulting the former president of Rabbis for Human Rights with a wooden club, striking him several times on his body and head.

Some of those who were there yelled “stop” and “no violence,” while another man took Ascherman’s phone and threw it away.

After the incident, Ascherman sought medical treatment in Jerusalem.

The assault took place in the area around Ma’aleh Ahuvia, an illegal outpost that was evacuated by Border Police and the Israeli Civil Administration on Tuesday. Hilltop youth began to rebuild the outpost the next day, according to the Ynet news site.

The outpost was set up in the area where Ahuvia Sandak, a 16-year-old, was killed in a car crash as he and other teenagers fled from police four months ago, after allegedly throwing rocks at Palestinians.

Ascherman came to the area to stop livestock belonging to residents of the outpost from grazing in fields cultivated by Palestinians who live in the nearby village of Deir Jarir.

After asking the settlers to remove their herd from the field, several more arrived and one of them assaulted the rabbi.

“One of the settlers began to attack me,” said Ascherman, “another settler took my phone and threw it into the field.”

He said he called the IDF and the police after the incident, and again after more settlers arrived holding “clubs and big sticks.”

“This is the last of some ten physical attacks in the last two months. Other volunteers and activists have been attacked as well. And there was an attempt to sabotage my car,” said Ascherman, who was attacked by a knife-wielding settler teen in 2015.

“They loosened the lug nuts and two wheels almost fell off… It’s ongoing violence,” he said of the incident in January.

“But the real story is our ongoing attempt to get the security forces to do their job and take care of this,” Ascherman told the Times of Israel, referring to settlers allowing their livestock to graze on Palestinian-cultivated land. 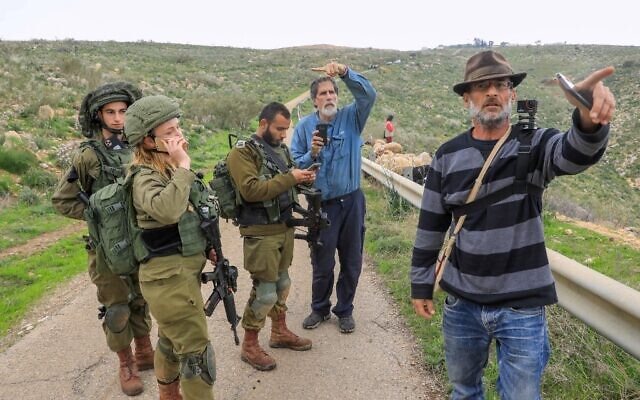 Ofer Cassif, a member of Knesset belonging to the mostly Arab Joint List Party, wrote on Twitter: “Don’t believe that these [attackers] are just ‘bad apples.’ This is what the people of Netanyahu, Smotrich and Ben Gvir look like. This violence is their way.”

Many Jewish terror suspects have been represented by Itamar Ben Gvir, the far-right politician elected to the Knesset in last month’s election with the help of Prime Minister Benjamin Netanyahu, who worked urgently to form a merger between Bezalel Smotrich’s Religious Zionism party and Ben Gvir’s party to ensure that the latter crossed the electoral threshold to potentially help the premier form a coalition.

Incidents of vandalism and attacks against Palestinians, Israeli security forces and activists in the West Bank are commonly referred to as “price tag” attacks, with perpetrators claiming they are retaliation for Palestinian violence or government policies seen as hostile to the settler movement.

Arrests of perpetrators have been exceedingly rare and rights groups lament that convictions are even more unusual, with the majority of charges in such cases being dropped. 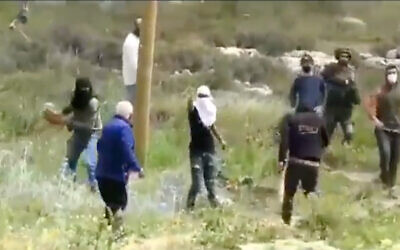 Settlers assault a Palestinian man in the West Bank in a video released on April 3, 2021. (Screenshot/Yesh Din)

Last week, Israeli settlers were filmed pelting a Palestinian man with stones near the village of Jalud in the northern West Bank. The footage was released by Yesh Din, a left-wing rights group.

And last month, a group of around 10 masked people, allegedly settlers, beat and threw rocks at a Palestinian family in the West Bank in an attack the family captured on video.

There have also been recent incidents of vandalism against Palestinians in the West Bank as well as inside Israel.