Far-right Religious Zionism MK Itamar Ben Gvir and Yamina MK Amichai Chikli were turned away from the Temple Mount Tuesday after failing to coordinate their visits with the Knesset Guard and the Shin Bet.

Lawmakers are required to notify of planned visits to the Jerusalem holy site 24 hours in advance.

Ben Gvir, who arrived at the Temple Mount compound after Chikli had already been turned away, said he was visiting the site in response to police canceling a planned nationalist march through the Old City.

“The police are acting in violation of the law that allows freedom of movement for Knesset members without any coordination,” he charged, claiming that his parliamentary immunity allowed him free access to the flashpoint site.

Israel captured the Temple Mount and Jerusalem’s Old City in the 1967 Six Day War and extended sovereignty throughout Jerusalem. However, it allowed the Jordanian Waqf to continue to maintain religious authority atop the mount, where Jews are allowed to visit under numerous restrictions, but not to pray.

Illustrative: Israeli security forces escort a group of religious Jews as they visit the Temple Mount in Jerusalem’s Old City, May 31, 2020. (Sliman Khader/Flash90)

The high-level security cabinet was set to meet Tuesday evening to discuss the contentious flag march initially planned to take place in Jerusalem on Thursday.

Police Commissioner Kobi Shabtai is to present several alternatives in a bid to allow the march to go forward after police initially refused to authorize the event, which was planned to follow a path through the Old City’s Muslim Quarter.

Following a meeting between Prime Minister Benjamin Netanyahu, ministers and top security officials that ended just after midnight Monday night, it was decided that Shabtai would present the proposals to the political leadership for possible authorization.

Organizers had sought to hold the march through the Muslim Quarter of the Old City on Thursday, after the original march last month was stopped short by rocket fire from Hamas at Jerusalem, which sparked a major 11-day conflict with Israel.

Ben Gvir and other nationalist politicians have accused police of giving in to terror by canceling the parade. Members of the so-called “change government” set to unseat Netanyahu have charged that the march is deliberately planned to stir unrest and potentially derail the incoming government before it is to be voted into office on Sunday.

Chikli, a member of prime minister-designate Naftali Bennett’s Yamina party, has said he will vote against the government due to the inclusion of left-wing and Arab Israeli parties in the coalition. 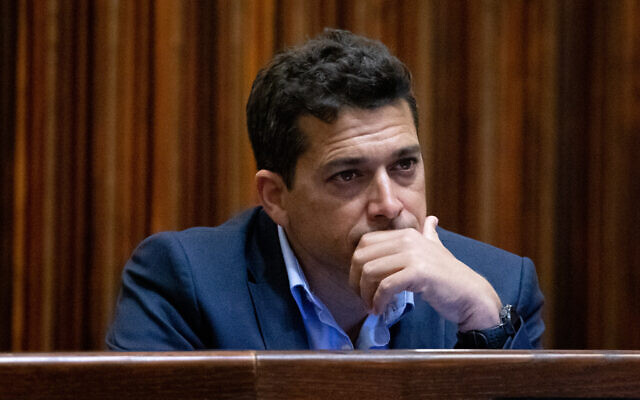 Bezalel Smotrich, leader of Ben Gvir’s far-right Religious Zionism party, called the decision to delay the march “an embarrassing capitulation to terror and to Hamas threats.

The annual Jerusalem Day event sees thousands of nationalist Jews march through Muslim-majority parts of Jerusalem toward the Western Wall, in a show of sovereignty to mark the Hebrew anniversary of the city’s east being captured by Israel during the Six Day War. The route has long been deemed provocative by Israeli and Palestinian critics since local Arab proprietors are forced to shutter their stores so law enforcement can secure the Palestinian-majority area for the nationalist Jewish revelers.