President Reuven Rivlin will begin consultations Wednesday aimed at deciding who to task with forming a new government, a day after Prime Minister Benjamin Netanyahu announced that he had failed.

Rivlin’s office said it would contact party representatives “regarding the process of forming a government” on Wednesday morning. He is now seen likely to give Yair Lapid of Yesh Atid the chance to form a coalition, in the knowledge that Lapid and Yamina’s Naftali Bennett have been holding negotiations under which Bennett would serve first as prime minister in a rotation agreement with Lapid.

An apparent effort by Bennett to secure the mandate for himself, despite having only 7 seats, seemed likely to fail amid reports that Likud was no longer considering supporting Bennett.

The reported change of heart was due to Bennett refusing to rule out forming a government with Netanyahu’s political rivals, Channel 12 news reported on Tuesday.

While Netanyahu’s party never openly declared it would recommend Bennett, numerous reports suggested Likud was weighing doing so as a way of preventing the Yamina leader from assembling a coalition with anti-Netanyahu parties.

Even if Lapid is handed the mandate, the rival bloc of parties faces a tough task to bring together all its various groups and build a Knesset majority, and Netanyahu continues as transitional prime minister for the time being.

The right-wing continued to try and pressure Bennett’s Yamina into refusing to partner with the left-wing and center parties that make up the so-called “change bloc,” together with the right-wing New Hope and Yisrael Beiteinu.

Late Tuesday, Rabbi Chaim Drukman, seen as a main spiritual leader of the national-religious camp, that Bennett is a part of, urged him not to join the “national unity” government.

“I really appreciate and admire Naftali Bennett. He needs to say unequivocally, ‘I won’t form a left-wing government’ that will destroy a lot,”  Druckman told Channel 12 news.

Netanyahu, who has also been pressuring Bennett not to form a government with his rivals, shared a clip of the video on his Twitter account. 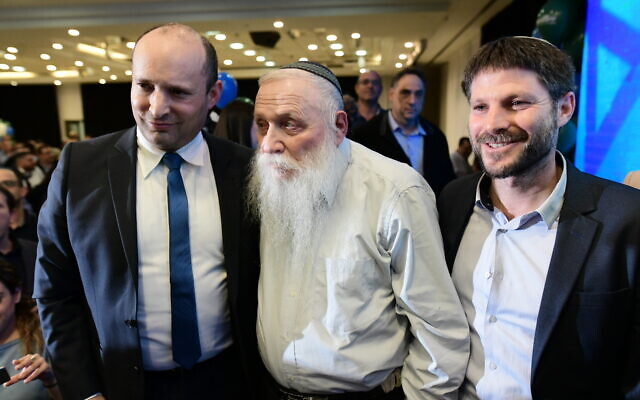 Meanwhile, Bezalel Smotrich, leader of the Religious Zionists, a coalition that includes the extreme right Otzma Yehudit and the anti-LGBT Noam party, urged the right to keep fighting, saying “nothing is over.”

It was Smotrich’s refusal to enter a government dependant on outside support from the Islamist Ra’am party that ultimately scuppered Netanyahu’s efforts to form a coalition, even though publically the prime minister blamed only Yamina.

“My brothers in the nationalist camp, raise your heads,” Smotrich wrote after NEtanayhu’s midnight deadline passed. “Nothing is over. We are still far from losing this battle.”

“What is important is that we main untied and strong, upright and confident in our path and with the help of God we will the general struggle because the truth is with us and in the end, the truth will be victorious,” he wrote.

Netanyahu formally returned the government-forming mandate to Rivlin a few minutes before the deadline expired, and the president now has three days to decide how best to proceed.

In a statement, Likud blamed Bennett for blocking Netanyahu’s route to a majority. “Because of Bennett’s refusal to commit to a right-wing government, a move that would definitely have led to the establishment of a government with additional MKs joining, Prime Minister Benjamin Netanyahu returned the mandate to the president,” Likud said as the midnight deadline passed. 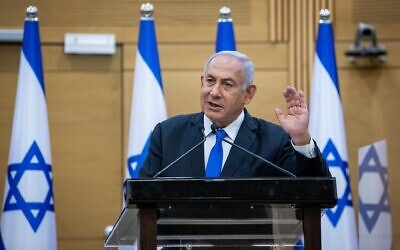 The president can now give the mandate to another MK, most likely Lapid or, possibly, Bennett. He could also send the mandate to the Knesset, which would have 21 days to find a candidate backed by 61 or more of the 120 MKs; if that failed, Israel would automatically head to its fifth election since April 2019.

Hebrew media reports citing senior political sources have speculated that Lapid will be given the next opportunity to form a government, as he had the second most recommendations after Netanyahu when Rivlin consulted with party representatives last month. The Likud leader was given the first opportunity to cobble together a coalition on April 6, after receiving 52 recommendations versus Lapid’s 45.

Lapid and Bennett have been negotiating coalition terms in recent weeks, reportedly closing in on agreements in many areas, with the Yesh Atid leader ready to let Bennett serve first as prime minister in a “unity government.” The capacity of the so-called “change bloc” of anti-Netanyahu parties to win a Knesset majority is not straightforward, since parties of radically diverse ideologies would need to back it. However, the fact that Likud tried to woo the conservative Islamic party Ra’am into supporting a Netanyahu-led coalition would appear to have broken a historic taboo on Arab parties holding a determining role in the establishment of an Israeli government.

Netanyahu, who has served as prime minister for a record-breaking 12 consecutive years, after a three-year term from 1996-9, was given first chance at building a government after the deadlocked March 23 elections — Israel’s fourth elections in two years. 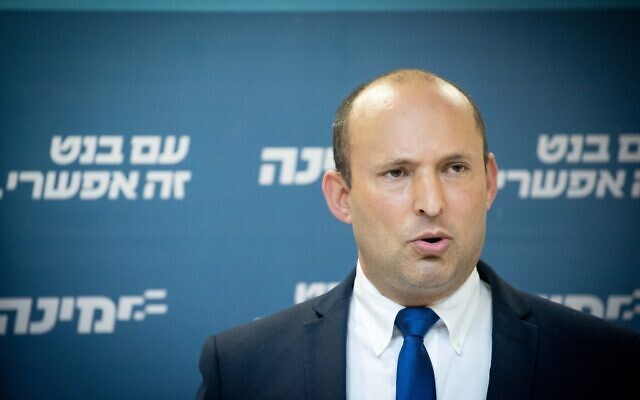 Rivlin would not necessarily grant the Yamina chair the mandate even if he did get more recommendations than Lapid, as the right-wing bloc already had a chance to form a government and failed to do so. If Bennett managed to get an absolute majority of MKs to back him — which would require convincing Ra’am to back him as well — Rivlin would likely have no choice but to hand him the mandate.

Channel 12 news on Tuesday quoted unnamed senior officials, who were said to have recently spoken with Rivlin, saying the president will not task Bennett with forming a government. According to the network, Rivlin may issue a decision as soon as Wednesday.

Prior to the Tuesday night deadline, Bennett had urged the establishment of a right-wing government and said that he would back a Netanyahu-led coalition on condition if it could muster a majority in the Knesset; otherwise, he said he would back a unity government with the “change bloc” that has vowed to oust the prime minister.

Lapid has spent the past several weeks galvanizing the support of the change bloc — which consists of Yesh Atid (17 seats), Blue and White (8), Yisrael Beytenu (7), Labor (7), New Hope (6), and Meretz (6) — but has also been in talks with additional parties including Yamina (7), Ra’am (4) and the Joint List (6), most of whose support he would need to swear in a government.