Palestinians fired a rocket from the Gaza Strip into Israel on Sunday night, the Israeli military said, marking the third consecutive night of rocket fire in southern Israel.

Rocket attack sirens wailed throughout Israeli communities near the Gaza border as well as in Sderot, sending thousands running for bomb shelters. Three Israelis were lightly injured as they scrambled for shelter, according to medics.

The rocket was intercepted by the Iron Dome missile defense system, the Israeli army said.

As in the previous two nights, no Palestinian group publicly took responsibility for the rockets. Israel conducted airstrikes against Hamas targets on Friday and Saturday following the rocket attacks, since it holds the terror group responsible for all rocket fire from Gaza.

A spokesperson for the Sha’ar Hanegev Regional Council said the area had sustained no casualties or material damage from the rockets.

Another two Israelis were treated by medics for acute anxiety attacks, according to the Magen David Adom ambulance service.

In an apparently unrelated incident in northern Israel, an unknown individual approached the northern border fence that divides Israel from Lebanon, near Metula.

Israeli troops rushed to the scene and the suspect fled back into Lebanese territory immediately upon their arrival, the military said. Earlier, residents of Metula were asked to avoid the area, as the military scanned the fence and launched flares.

Hamas has ruled Gaza since 2007, when the Islamist party conquered the territory from its Fatah rivals in a brutal civil war. Israel and Egypt have been imposing a tight blockade on the enclave ever since, in an attempt to weaken Hamas.

Since the 11-day May escalation, Israel has imposed heightened restrictions on the already-blockaded enclave. Israel also blocked the flow of Qatari cash subsidies to the Gaza Strip, which it had previously allowed in exchange for quiet along its southern border.

Israel has gradually loosened some of those restrictions on Gaza, but others have remained in place. Indirect talks between Israel and Hamas on reaching a full deal to rebuild the Gaza Strip following the May escalation have also shown few signs of progress.

The flames were fanned by the escape of six Palestinian security prisoners, most of whom are Islamic Jihad members serving life sentences for terrorism, from Gilboa Prison. Four were recaptured over the weekend, with Islamic Jihad vowing to avenge any harm done to them or the remaining fugitives.

In a speech on Sunday afternoon, Israeli army Chief of Staff Aviv Kohavi warned Hamas not to escalate the situation.

“The Israel Defense Force defends the Gaza border and will not accept any violation of sovereignty. We vigorously respond to every violation and we shall continue to do so. If the situation escalates, Hamas and the Gaza Strip will pay a heavy price,” Kohavi said.

Tensions have also risen due to the collapse of an agreement to bring Qatari cash into the Gaza Strip for Hamas’s employees.

Hamas sees the millions in Qatari-funded monthly salaries for its civil servants as a key demand. Qatar, Israel, and the United Nations have agreed to transfer other subsidies Qatar provides, including $100 cash payments for 100,000 poor Gazan families. Those subsidies are set to begin to enter Gaza on Monday. 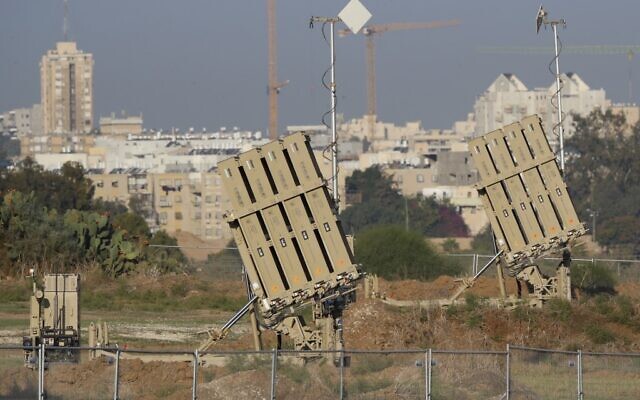 Israel had been allowing millions in Qatari cash to flow through Israeli crossings into Gaza on a monthly basis since 2018, in order to maintain a fragile ceasefire with Hamas. As of early 2021, some $30 million in cash was being delivered in suitcases to Gaza each month through an Israeli-controlled crossing.

The parties have yet to agree on a new mechanism for transferring Qatari funds to Hamas employees. Israel’s new government has said it does not intend to allow Qatar to channel cash directly to Hamas, as was policy under former prime minister Benjamin Netanyahu.

On Friday, Qatar’s Gaza envoy, Mohammad al-Emadi, announced that the Palestinian Authority had withdrawn from an agreement to transfer the salaries through its banks.