Conwoman, 60, posed as gem expert hired by Russian investors to steal seven diamonds worth £4.2million by using ‘sleight of hand’ to swap them for PEBBLES in heist at Mayfair jewellers Boodles, court hears

By Jacob Thorburn For Mailonline

A fake gem expert swapped diamonds worth £4.2 million for garden pebbles using ‘sleight of hand’ in a theft from a luxury Mayfair jewellers, a court has heard.

Lulu Lakatos, 60, allegedly posed as a gemmologist, ‘Anna’, sent to value the precious stones on behalf of a group posing as wealthy Russian buyers.

Southwark Crown Court heard Lakatos went to the family firm’s New Bond Street showroom to verify the gems, which were to be placed in a locked bag and held in the jewellers’ vault until funds were transferred.

But when the bag was opened after Boodles’ own diamond expert became suspicious, inside were seven small pebbles.

‘The diamonds had been stolen by the defendant by sleight of hand,’ said prosecutor Philip Stott.

‘The conspiracy in which she is alleged to have played an integral and central part was one of the highest possible sophistication, planning, risk, and reward.’

Lulu Lakatos, 60, was charged with conspiracy to steal over the 2016 theft from the family-owned luxury jeweller (pictured) in Mayfair after she was extradited from France last year

Lakatos, who was born in Romania but lived in France, denies conspiracy to steal on or before March 10 2016.

In a statement read in court, Mr Wainwright told how he was approached by an Israeli, ‘Simon Glas’ in the weeks before the theft who wanted to buy high-value diamonds as an investment.

The sale of seven high-value diamonds was agreed following a meeting in Monaco, where Mr Wainwright was introduced to Glas’s business partner, a Russian called ‘Alexander’.

The gems, worth a total of £4.2million, included a 20 carat heart-shaped diamond valued at more than £2.2 million and a £1.1 million three carat pear-shaped fancy pink diamond.

Lakatos was allegedly the woman who posed as ‘Anna’ sent to Boodles to examine the stones on March 10 2016.

Mr Wainwright said he took her down the spiral glass staircase into the basement meeting room along with his own gemmologist Emma Barton.

‘Anna” was most unattractive, she was overweight, she was dressed most extraordinarily, she was wearing the sort of thing a Russian dancer would wear.

‘She had enormous boobs and you could see her cleavage, it was most unattractive.’ 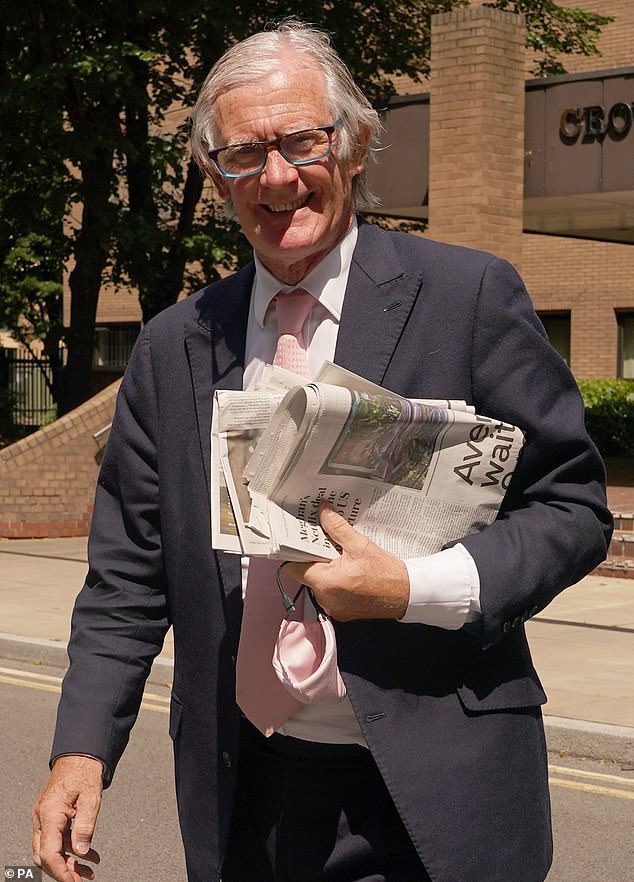 Boodles chairman Nicholas Wainwright (above) watched as ‘Anna’ examined the stones but even could not prevent her using sleight of hand to swap the jewels for an identical bag of pebbles, a court has heard

The court heard Lakatos examined and weighed the diamonds before individually wrapping them in pre-cut tissue paper and placing them inside opaque boxes, which were put into a zippable purse-like bag that was padlocked shut.

‘She didn’t use a loupe, a jeweller’s eye glass. As a first point of call, that is what you would generally do.

‘She had some gemmologist’s equipment that she brought with her, scales, an ultraviolet light, and a thermal conductivity probe.

‘She took each stone, weighed it, places it under ultraviolet light, and used the thermal conductivity probe.

‘She didn’t know how to use her equipment very well. First of all, would never use the ultraviolet light under shop lights, you need a darkened room.

‘It did make me question the qualifications that “Anna” had.’

But Ms Barton said ‘Anna’ put the locked purse into her own handbag when her boss went upstairs to take a call from the Russian buyer, ‘Alexander’.

‘She watched Nicholas walk up the stairs and as soon as his back was turned on the spiral staircase, she grabbed the bag and stuck it in her handbag,’ she told the jury.

‘I said, ‘no, no, no,’ you can’t do that. Please take the diamonds out of your handbag now. I have to be able to see the diamonds at all times.

‘In English, she replied, ‘It’s ok, don’t worry, there’s nothing to worry about’.’

The court heard the locked purse was in her handbag for a matter of two or three seconds before it was put back on the table before being put in the shop’s safe.

‘However, it seems what happened was it was swapped for an identical locked bag and that duplicate bag was placed back on the table,’ said Mr Stott.

Ms Barton said she told her boss what had happened and he searched Anna’s bag in a ‘gentlemanly’ way, finding nothing, before she left the store.

Lakatos allegedly then moved the purse containing the diamonds from her bag to the handbag of one of two unknown young women, who had been browsing in the nearby Ralph Lauren and Cartier stores.

Mr Stott said Lakatos, from the Saint Brieuc region of France, changed her clothes in a pub toilet, assisted by another accomplice, Georgeta Danila, before the pair left London on the Eurostar. 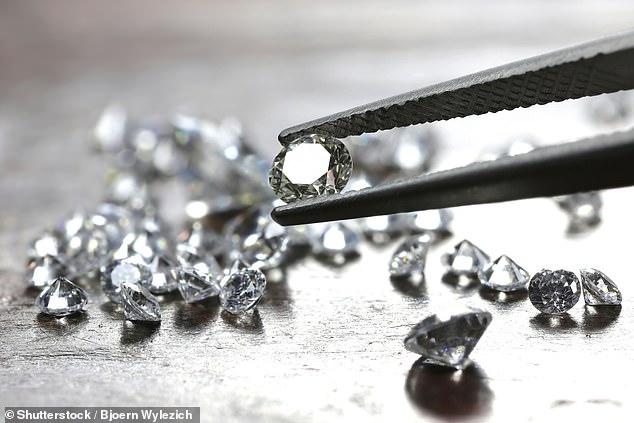 Jurors were told two men, Christophe Stankovic and Mickael Jovanovic, 29, who have already pleaded guilty to conspiracy to steal over the theft – made their getaway, with the two younger women, to France in a rented Citroen through the Channel Tunnel.

All of those involved were out of the country within three hours of the theft, which was discovered the following day.

Boodles sent the bag to Heathrow to be X-rayed, which showed diamond-like stones were inside, but Ms Barton remained concerned.

She said: ‘The following evening, at about 5.30pm, we were closing the shop and decided to just open the bag because of the fuss I had made and that’s when we found there were seven garden pebbles.’

Lakatos was arrested in France on a European arrest warrant in September last year before being extradited to the UK.

Wearing spectacles and with her grey hair pulled back into a ponytail, she appeared in the dock, following proceedings with the help of a French interpreter.

The trial, which is expected to last three days, continues.