The head of the right-wing New Hope party called on Prime Minister Benjamin Netanyahu to dismiss a Likud lawmaker for reportedly reaching out to the Palestinians about encouraging Arab Israelis to back the premier in the March 23 elections.

The outreach by Likud MK Fateen Mulla to the Palestinian Liberation Organization was reported by the Yedioth Ahronoth daily. Mulla, a deputy minister in the Prime Minister’s Office, confirmed to the newspaper that he held talks with the PLO’s Committee for Interaction with Israeli Society, but did not give any details on what was under discussion.

Palestinian sources told Yedioth that the Ramallah-based Palestinian Authority had been in contact with Likud in the past few weeks over what the report called “quiet support” for Netanyahu in the coming election. Ramallah is reportedly concerned that Netanyahu could be ousted by an even more right-wing political leader.

According to Channel 12 news, Netanyahu was angered by the report and rebuked Mulla, who was at the Prime Minister’s Office Monday evening for a meeting Likud sources said were prescheduled.

“Where does Fateen Mulla serve? He’s a deputy minister in the Prime Minister’s Office,” Sa’ar noted in an interview with the network. “Netanyahu has lost all shame here, that through a deputy minister in his office, he is trying to involve the PLO in elections within the State of Israel.”

Sa’ar added: “This is another indication that there are no red lines, no restraints, everything is for personal interests.”

The New Hope leader pondered what Netanyahu would offer in return if the PLO were to assist his reelection efforts and cast doubt on any notion that Mulla decided to act on his own.

“If this is indeed true and he did it on his own accord, will the prime minister fire him, because this is a very severe thing to involve hostile state elements [in the elections]” Sa’ar said.

He noted the PLO’s support for a war crimes probe of Israel at the International Criminal Court and said if Mulla did act without Netanyahu’s knowledge, the premier should fire him.

According to the Yediot report the discussions surrounded drumming up support for Likud among Arab Israeli voters, or alternatively, encouraging them to not vote for the Joint List, a predominantly Arab faction that usually gains the lion’s share of the community’s support, sources said.

According to the report, relations between the Joint List and Ramallah have cooled over the past few months.

Likud was represented in the talks by Mulla, who hails from the Druze community, the report said, while on the Palestinian side were members of the PLO committee headed by panel leader Muhammad Al-Madani, a close confidant of Palestinian Authority President Mahmoud Abbas. 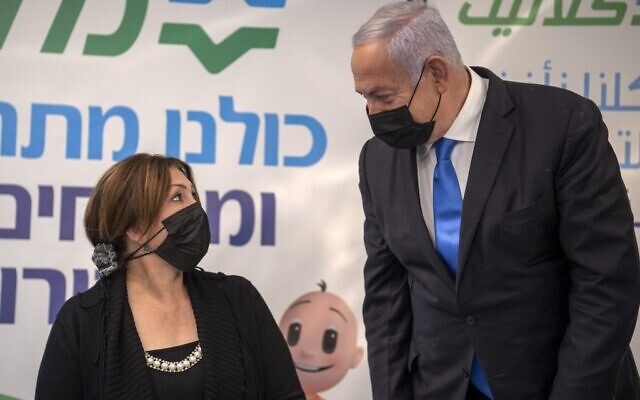 Prime Minister Benjamin Netanyahu speaks to an unidentified woman during his visit to a coronavirus vaccination facility in the northern Israeli Arab city of Nazareth, on January 13, 2021. (Gil Eliyahu/Pool/AFP)

The Palestinians invited Likud representatives to hold face-to-face talks in Ramallah, but the Israeli side backed down, apparently due to security considerations, the report said. This offended the Palestinians, one source said, and the issue has now receded.

The Ramallah sources said that after Israeli elections were called at the end of last year, PA analysts came to the conclusion that the campaign would be a battle between the right-wing Likud and the even more hawkish New Hope led by Sa’ar, along with the hard-right Yamina party led by MK Naftali Bennett, with the Palestinians preferring the relatively more moderate Likud of Netanyahu.

Palestinians are concerned that if either Sa’ar or Bennett gain power it could lead to unilateral moves such as the annexation of large parts of the West Bank, the sources said.

The PLO’s Committee for Interaction with Israeli Society said in a statement following the report that “meeting various Israeli political parties is part of its mission,” according to the semi-official WAFA news site.

“We have repeatedly seen in the various Israeli election campaigns many manifestations of Israelis defaming their opponents and in every time they involve the Palestinians in their campaign,” the statement said.

Mulla confirmed that there had been talks, but he described them as covering “all sorts of things on the backburner.”

“We are trying to do good for Israel and the Middle East,” he told Yedioth. “I can’t go into more details than that.”

The Joint List, he said, “does not represent the Palestinian people.”