Gideon Sa’ar, 54, has spent over three decades as a member of the Likud Party, even rising to its No. 2 slot on the party slate.

Then, in December, he left Likud to form the New Hope party.

Once one of Likud’s most popular politicians, Sa’ar is now one of the countless promising rising stars elevated by Likud primary voters over the years who found themselves butting up against the glass ceiling of an immovable Benjamin Netanyahu at the top of the party hierarchy.

Netanyahu has a long history of undermining and sidelining anyone he identifies as a potential challenger, creating the strange phenomenon that fully three right-wing political parties now challenging him in the race, Avigdor Liberman’s Israel Beytenu, Naftali Bennett’s Yamina and Sa’ar’s New Hope, are led by former Likud officials pushed out of the party by its leader. (They’re not the only ones to take that path. Most recently, Moshe Kahlon similarly left Likud to found the now-defunct Kulanu party.)

All three men are eager to see the end of Netanyahu’s long rule, and their ability to draw right-wing voters away from pro-Netanyahu parties — first Liberman in the two elections in 2019, and Bennett and Sa’ar in the current one, according to polls — has denied Netanyahu a united right-wing bloc at the ballot box that would allow him, at long last, an unequivocal victory at the ballot box at the end of two long years of electoral deadlock.

When he founded New Hope in December, Sa’ar had a simple message for Israelis who want a change in prime minister: Only the right could do it. There aren’t enough center-left voters, or at least not enough unity on the center-left, to do the job.

After two years of frustration for center-left voters, the message fell on fertile ground. A December 15 poll for Channel 12 gave New Hope 21 seats.

But as the months passed and center-left parties Yesh Atid and Labor found their footing and drew centrist and leftist anti-Netanyahu voters back to their ranks, Sa’ar has seen a slow but steady decline in the polls. By January 12, the same Channel 12 poll gave him 16 seats. By February 16 it was 13, and by Thursday it was nine.

Sa’ar is heading into election day on Tuesday aware that his initial hope to be the one who replaces an ousted Netanyahu has likely moved far beyond his reach.

But his essential argument, delivered in a Times of Israel interview Wednesday, hasn’t changed: Mathematically, when it comes to negotiating the next coalition after election day, only a strong anti-Netanyahu right — a strong New Hope, that is — can put an end to the Netanyahu era.

The Times of Israel interview is part of a series of events and interviews Sa’ar has conducted in recent days as part of his final-leg case to voters that a vote for centrist Yesh Atid or left-wing parties won’t produce the result they want. 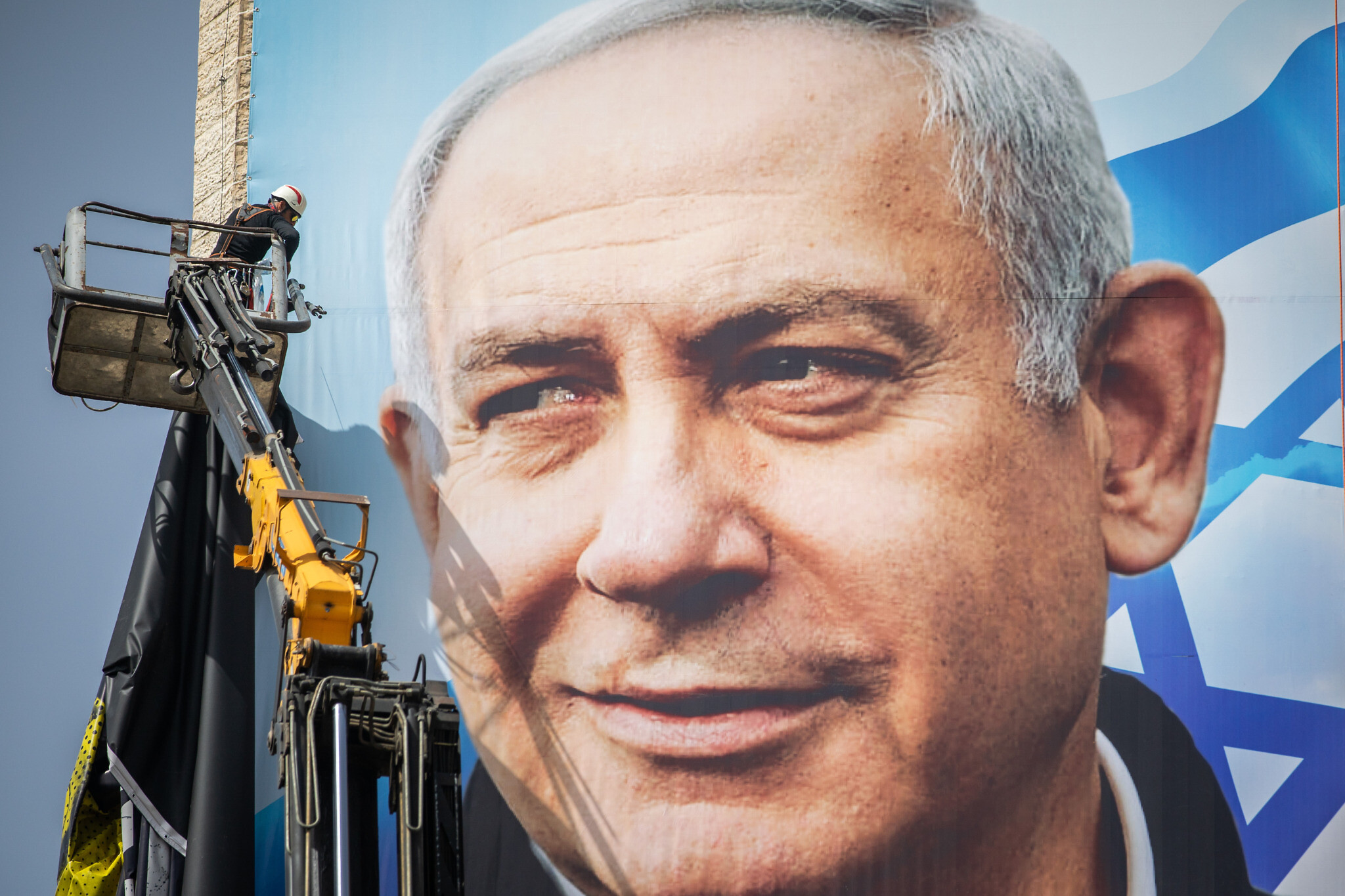 Sa’ar has tried to dance between the raindrops over the last three months. He leads an explicitly right-wing party that must attract center-left voters to succeed in its political goal, and an explicitly anti-Netanyahu party trying to make that message resonate even as the Netanyahu-led vaccination campaign ushers the country out of the pandemic.

During the conversation, when asked why Netanyahu continues to enjoy the support of the most reliable voters in the body politic — Likud voters — despite the government’s failures during the pandemic, he chose not to answer, instead pointing out that a majority of the electorate still “wants change,” even if that majority’s party preferences are too scattered to actually deliver that change.

His chief argument is ultimately a tactical one geared to appeal to right-wingers frustrated with Netanyahu and center-left voters who prioritize replacing the Likud leader over other issues.

You’ve vowed not to sit with Netanyahu. That’s your promise to voters. But what’s so terrible about him? The vaccination campaign was a success, his poll numbers are rising — slowly, only a little, but still enough to potentially make a difference in this close race. Things seem to be working out for the country and for him, no? Why is it so important to replace him?

I think anyone who looks at the situation in a country that’s going to an election for a fourth time in two years, at a total cost of 15 billion shekels ($4.5 billion), understands that the reason we’re in a neverending election cycle is Netanyahu.

He’s the one who, despite having a coalition of over 70 members of Knesset [since May 2020] and could have passed a state budget, chose instead to throw the country to a fourth election in two years just because he didn’t want to carry out a [coalition] agreement he signed.

From all of that, it’s crystal clear today that Netanyahu, unfortunately, prioritizes his personal interests over those of the country. That’s already caused terrible damage to the state of Israel, to the economy, to our social fabric. So I believe there must be a change, and I hope it will happen this coming Tuesday. 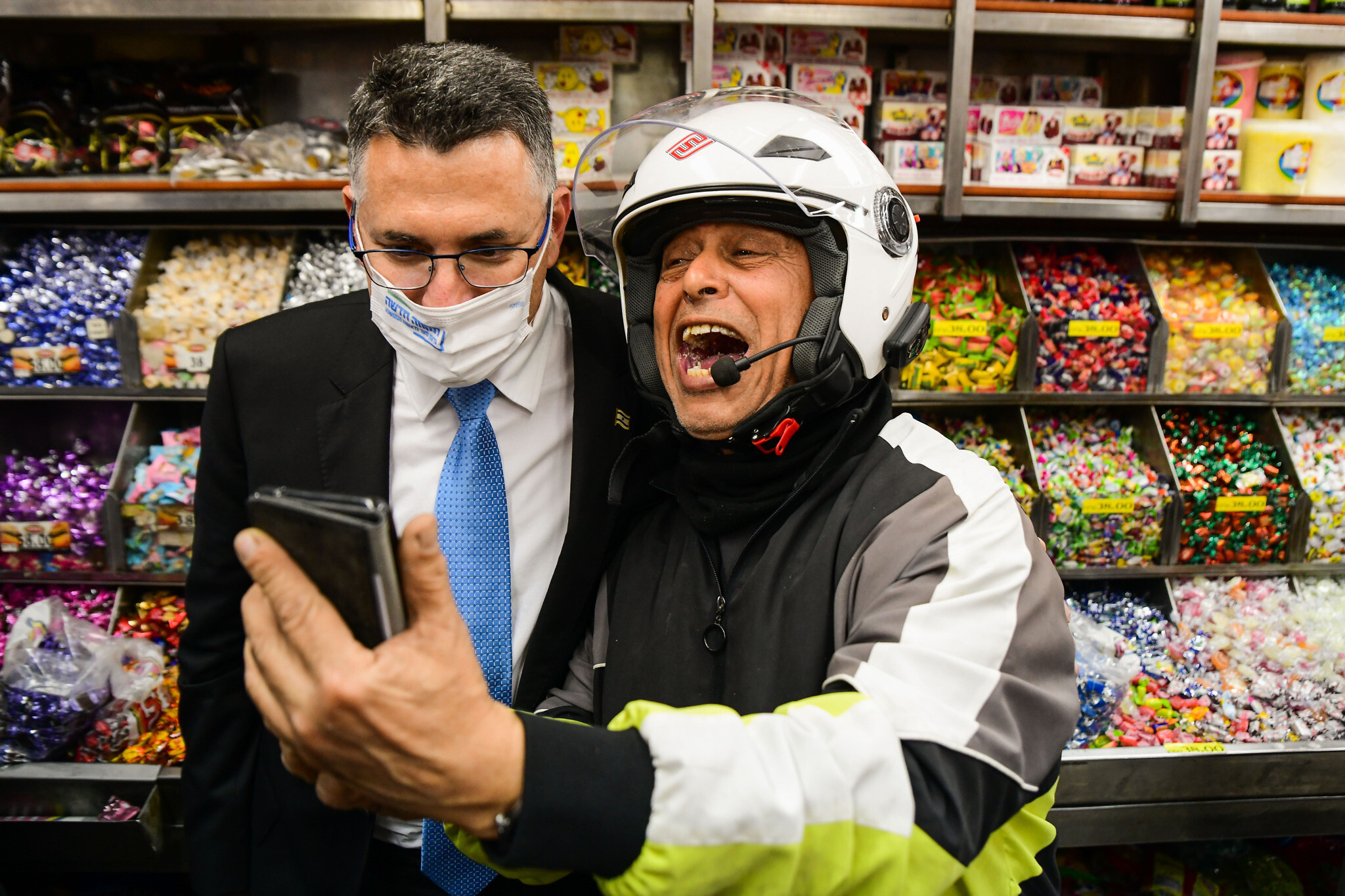 I think many Israelis, including Netanyahu supporters, would agree that the major political fault line causing these repeated elections is the fight over Netanyahu himself. Why do you think that despite failures in managing the pandemic, and despite the political turmoil, he can still rely on 27 or 30 seats’ worth of Likud voters who stick by him? How do you understand that very stable support? Everywhere else in the political system we’re seeing dramatic shifts among voters, but around him there’s this stability.

I think if you look at previous rounds and compare to this one, Netanyahu has declined. [Likud won 36 seats in the 2020 race, and is now polling at or slightly below 30 seats. — HG]

But I don’t intend to be a political analyst here. I, as a leader who wants to change the current reality for the betterment of my country, took a step in December, leaving Likud, which was my home for my entire adult life, and establishing New Hope in order to create a possibility for change.

That possibility for change depends on a political framework that includes people from the center and the right, those who can’t cross over to the other side of the aisle but understand the need to change the government. That political framework is the key to delivering change on Tuesday.

I’m saying as clearly as possible: No other element, no one who sits left-of-center will be able to deliver that change. If we get enough strength from the public, we have a chance to unite elements right-of-center and on the center-left, to form a government that will replace the Netanyahu government.

You can unite, for example, Haredi parties and secularist Yair Lapid?

I don’t get into what the coalition will look like. It’s a little unserious to deal with coalitions when we don’t yet know the results.

But there’s a potential for that to happen, a potential that wasn’t there in December 2020 when I established New Hope. I hope very much the public understands that and gives us that strength. 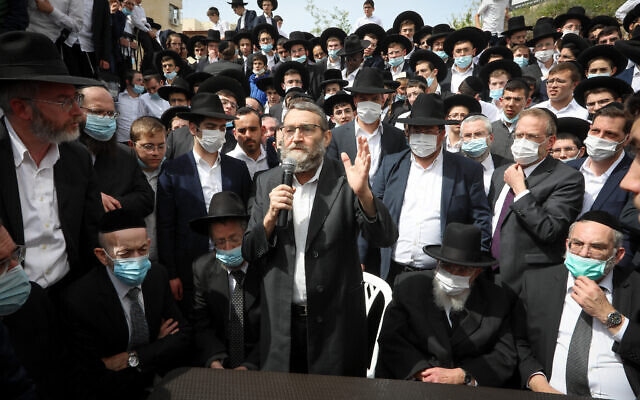 You don’t want to discuss coalitions, but many voters are voting tactically based on what they believe the future coalition might look like, and campaigns are responding to that. Netanyahu is asking voters to consider the Religious Zionism party to keep them above the vote threshold. Lapid is doing the same for Meretz. How do you deal with that tactical voter?

Don’t waste your vote on parties that either aren’t committed to that change or that you know from past experience don’t have a chance practically to bring it about.

You have published a party platform. It’s detailed, you’ve put thought and effort into it. You just mentioned government reform — that’s in there. But Blue and White over the past two years, when it was winning 30-plus seats, didn’t really have a clear or comprehensive policy agenda. Likud hasn’t published a platform for years. It seems the public doesn’t reward detailed policy arguments. Are policy issues relevant in this election?

A serious party, a party that wants to bring change — I’m interested in politics to bring that change, to make life here better, to improve the quality of life of Israel’s citizens. Politics without that isn’t interesting. So we’ve written 30 separate plans that are on our website on most of the issues that are important to Israelis. And we’re continuing to work even now on more content.

We’re a new party that was established three months ago. But we managed to create content for this election for those who are interested.

I put out a book of conversations during the campaign because I felt that the discourse isn’t around issues, it’s mostly a discussion about political analysis. I’m not saying the public isn’t interested in that, but in the end, the public is looking for answers about how this will all affect their lives. That’s the essence of politics, and all parties should do it. That that’s not how it’s done in all parties is unfortunate and a problem in our political life. 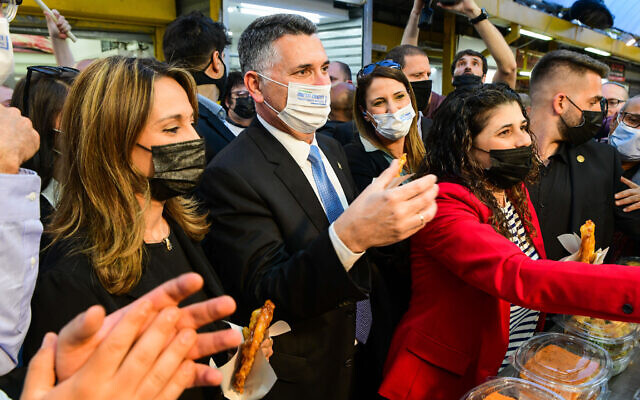 After the election, assuming the current polls bear out at the ballot box, is your party sticking around? Did you establish a Yesh Atid, which is still running strong after eight years and five elections, or a Kulanu, which petered out after its second race?

Of course [it’s sticking around]. I established New Hope for the long haul. I’m going to lay down its roots throughout the country. We’ve established over 150 branches in a very short time. I’m a big believer in the grassroots. This will be a democratic movement. All my life I’ve been in a democratic movement and everything I’ve won was through standing for election.

And there’s room today in Israel’s political landscape for a liberal center-right party. That’s very much missing. I think you can see that in the fact that of all the parties established ahead of this election — Huldai’s and Shelah’s and Bogi’s and Zelekha’s, all of them — either dropped out or are polling below the threshold. [Those are references to Ron Huldai’s The Israelis party, Ofer Shelah’s Tnufa party, Moshe Ya’alon’s Telem party and Yaron Zelekha’s New Economic party. — HG]

The only party that managed to find a base is New Hope, and I think that’s a sign of a real desire among voters for a liberal center-right party.

Tell me about the “French law” that would grant a prime minister immunity from criminal investigation during their term. We’ve heard some chatter from pro-Netanyahu candidates promising to advance such a bill.

We’re opposed to the French law. The reason this idea is even in the headlines lately is because it was floated as a demand in future coalition talks by Itamar Ben-Gvir [of the Religious Zionism slate].

That’s how Netanyahu likes to work. Others do his work, and he says, “I’m not dealing with this.”

I think such a law, which is intended to stop Netanyahu’s trial, would undermine the principle of equality before the law. 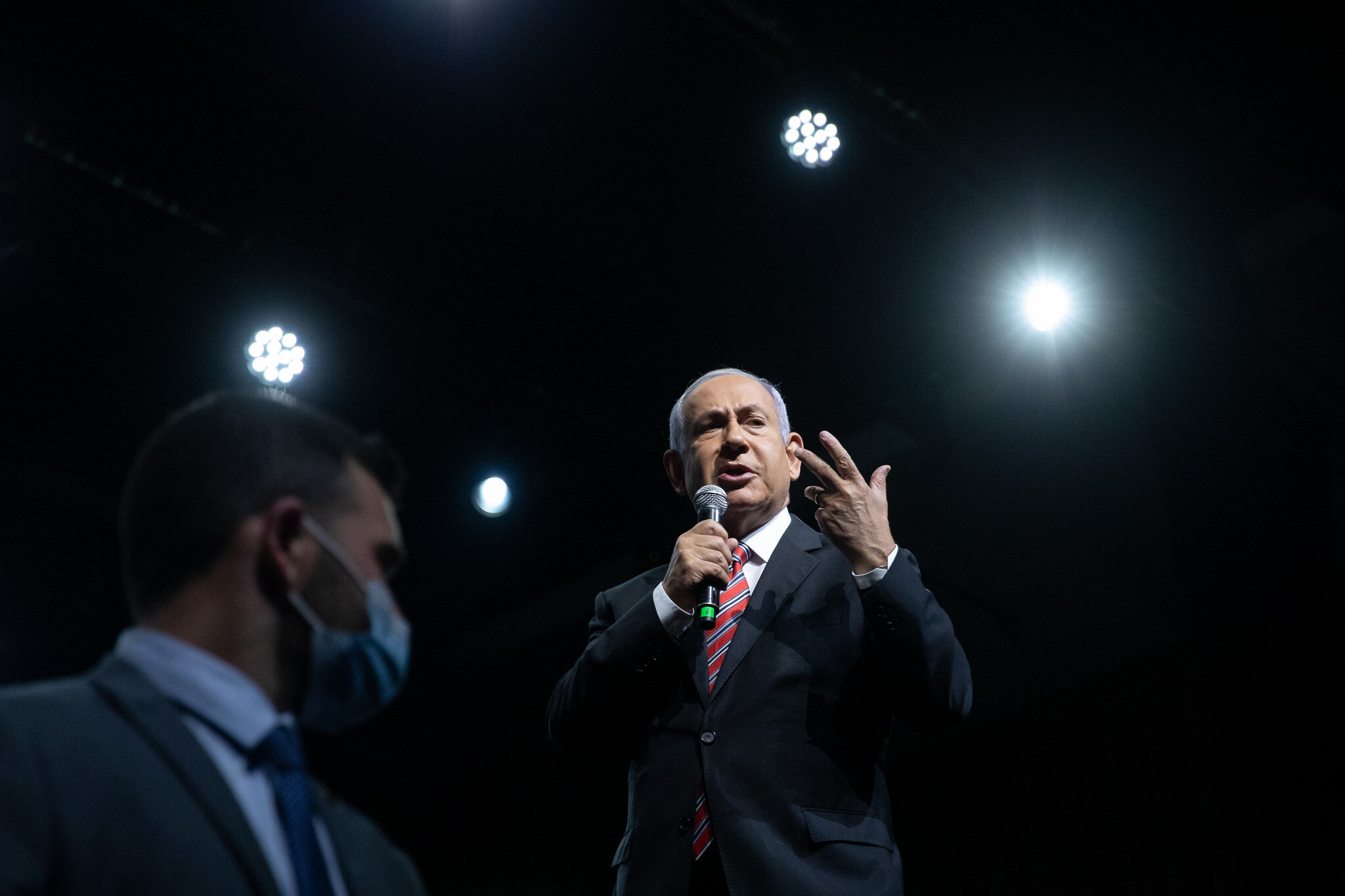 Prime Minister Benjamin Netanyahu speaks at a conference of the ‘Besheva’ group in Jerusalem, on March 14, 2021. (Yonatan Sindel/Flash90)

And what about the opposite initiative, the proposal to pass a law that would disqualify someone under criminal indictment, like Netanyahu, from serving as prime minister?

We’re going to consider our position on that. But it won’t apply retroactively. It won’t apply in the 24th Knesset. You can’t change the rules of the game in the middle of the game.

Do we need to institute such a limit for the future? From our experience of the past year, there are certainly reasons to think that it’s worth considering that seriously. But again, not retroactively.

Finally, do you expect this election to be decisive, or will we be having this conversation again ahead of a fifth election in a few months’ time?

If New Hope comes out of election day strong, there won’t be a fifth election.