RIYADH, Saudi Arabia — Saudi Arabia has officially allowed businesses to remain open during the five daily Muslim prayers, a highly sensitive reform in a kingdom that is trying to shake off its austere image.

Since becoming de facto leader in 2017, Crown Prince Mohammed bin Salman has introduced sweeping economic and social changes designed to reduce the kingdom’s dependence on oil and reset the role of religion.

“Stores and other commercial and economic activities will remain open throughout the working day and especially during [prayer] hours,” the Federation of Saudi Chambers said in a statement late Friday.

Officially, the decision is part of the fight against the coronavirus pandemic and aims to avoid “gatherings and long queues in front of closed stores during prayer hours.”

However, it comes after a 2019 decree that said businesses could stay open 24 hours a day for an unspecified fee.

The move, which triggered confusion over whether it included the Islamic prayer times, was seen by some as a trial loosening of the rules.

Pilgrims arrive to attend the Hajj season in the holy Saudi city of Mecca, on July 17, 2021 (Fayez Nureldine/AFP)

Since then, some restaurants, supermarkets and other stores have stayed open, particularly in the capital Riyadh.

Previously, after the pre-dawn Fajr prayer they were obliged to close during the day’s other four prayers, putting workers out of action for a total of about two hours in the Islamic world’s only mandatory prayer time shutdown.

The new rules remove restrictions that members of the advisory Shura Council had said cost the Saudi economy tens of billions of riyals a year.

While the government’s reforms have attracted little public criticism amid an accompanying crackdown on dissent, the issue remains highly sensitive in the kingdom where, until a few years ago, religious police elicited fear by enforcing such rules.

The guardians of public morality, once notorious for chasing men and women out of malls to pray and berating anyone seen mingling with the opposite sex, are now largely out of sight. 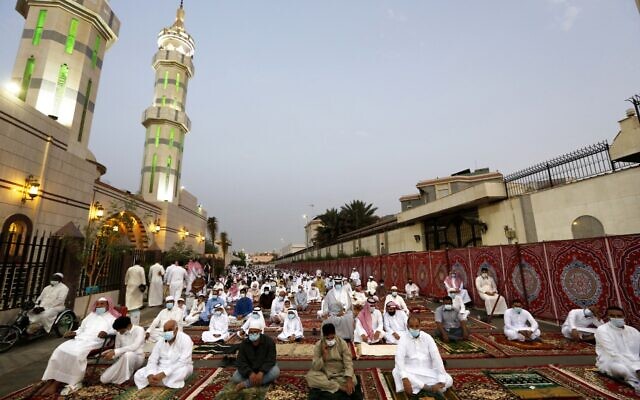 Muslims, wearing masks and keeping social distancing to curb the spread of coronavirus outbreak, perform an Eid al-Fitr prayer marking the end of the holy fasting month of Ramadan at al-Mirabi Mosque in Jiddah, Saudi Arabia, on Thursday, May 13, 2021. (AP Photo/Amr Nabil)

However, observers say that authorities still watch carefully for a possible backlash from arch-conservatives.

Saudi Arabia, home to the holiest Muslim sites, has long been associated with a rigid branch of Islam known as Wahhabism.

But Prince Mohammed has sought to position himself as a champion of “moderate” Islam, even as his international reputation took a hit from the 2018 murder of Saudi journalist Jamal Khashoggi inside the Saudi consulate in Istanbul.

As clerical power wanes, preachers are endorsing government decisions they once vehemently opposed — including allowing women to drive and the reopening of cinemas.