The Health Ministry reinstated the requirement to wears masks in schools in the Modiin-Maccabim-Reut municipality and in the town of Binyamina starting Sunday, after coronavirus outbreaks at two schools in those cities.

The reimposed regulation applies to all areas of schools, both indoors and outdoors, the ministry said in a statement.

The announcement came a day after Modiin Mayor Haim Bibas said he had decided to bring back the indoor mask mandate throughout the city after it was dropped nationwide last week.

“I appeal to school principals and educational staff to be strict about the order and for parents to avoid entering the grounds of educational institutions as much as possible. We must do everything we can to prevent a renewed rise in morbidity,” tweeted Bibas, who also heads the federation of local government leaders.

It was announced on Saturday that 44 students at two schools in the northern town of Binyamina tested positive for the coronavirus. Earlier in the week, 15 sixth-graders were found to be infected in the central city of Modiin.

According to Kan news, initial tests indicate the outbreaks were both of the Delta variant, first identified in India, which is more contagious than other variants and may be better able to bypass vaccines.

The report said several vaccinated adults had been infected in the school outbreaks.

According to reports, there were concerns that both school outbreaks could be linked to people recently returning from overseas travel without abiding by quarantine rules. The Health Ministry currently recommends against any non-essential travel.

The ministry is additionally weighing reimposing certain COVID-19 restrictions on unvaccinated individuals returning from abroad, as well as those arriving from “high-risk” countries, amid fears of a renewed outbreak of the virus in the country, according to a Saturday television report.

Officials plan for unvaccinated individuals over the age of 14, and anyone arriving from countries deemed high risk, to be required to self-isolate at home with an electronic bracelet, Channel 12 news reported. Those who will refuse the bracelet will be required to spend their isolation period in state-run quarantine hotels, according to the report.

Previous plans to use electronic bracelets to ensure self-isolation for arrivals were only partially enforced. On June 1, Israel lifted nearly all remaining virus-related restrictions.

Health Ministry officials estimate that only some 70 percent of those arriving from abroad have been vaccinated, and with many not quarantining correctly, this may be cause for concern.

However, the Kan public broadcaster reported Saturday that around a third of those who tested positive for the Delta variant after international travel were fully vaccinated. The report did not give a source for the figure or the actual number of people, and did not specify if any of them were symptomatic. 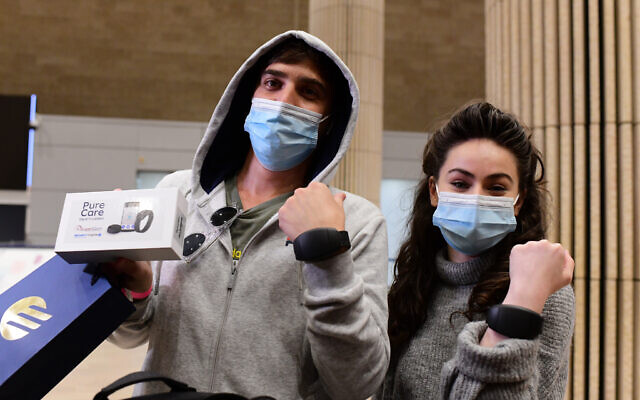 Passengers arriving on a flight from Frankfurt take part in the pilot program of wearing electronic bracelets upon arrival in Israel, on March 01, 2021. (Tomer Neuberg/Flash90)

On Friday, the Health Ministry temporarily suspended the requirement for travelers entering Israel to be tested for the coronavirus upon arrival, following crowding at the airport as a bottleneck formed around passengers waiting to be swabbed.

At least 1,000 people entered without being tested, according to Kan news, though those arriving from countries deemed high risk — Argentina, Brazil, South Africa, India, Mexico and Russia — were not allowed to skip the test even if vaccinated, according to Hebrew media reports.

A national inoculation drive has already seen over half the Israeli population vaccinated against COVID-19 and brought down new daily cases from thousands at the beginning of the year to 33 people diagnosed on Friday and 43 on Saturday, a slight rise on the rates seen in recent weeks.

Health Ministry data published Saturday showed that while there are just 287 active virus patients in the country, the number is starting to rise. Since the start of the outbreak early last year 839,830 people have been diagnosed with COVID-19 in Israel and 6,427 are known to have died of the disease.