Schools across the country will remain shuttered on Tuesday after interministerial talks on a plan to reopen the education system amid the pandemic ended without a decision.

Gallant, according to leaks from the meeting, had warned ministers that schools would not have been able to reopen on Tuesday even if the cabinet had voted in favor of doing so because the education and health ministries have yet to agree on a plan that would allow for schools to reopen safely.

Speaking at a conference earlier in the day, Gallant argued that schools would not be a source of new coronavirus cases and that children were being infected at home. Moreover, he maintained that towns with low infection rates should be allowed to reopen schools immediately, lamenting what he termed Health Ministry foot-dragging on the matter.

He said the earliest schools would be able to reopen would be Wednesday, but that would only happen if the cabinet gives a green light on Monday evening. Ministers were scheduled to reconvene at 7:30 p.m.

According to one proposed plan, the education system will open for preschoolers, first- through fourth-graders and 11th- and 12th-graders, in so-called green and yellow cities, where infection rates are relatively low.

In the rest of the country — orange and red cities — the plan proposes that classes for preschoolers, first- through fourth-graders along with 11th-and-12th graders be divided in half, with students meeting in person every other day. Those classes would be held outdoors.

Meanwhile Monday, malls and restaurants were threatening to reopen on Thursday in defiance of government orders, according to a coalition representing the businesses. 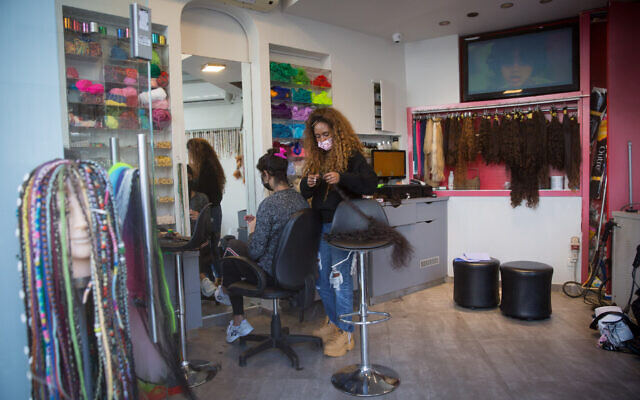 A hairdresser wearing a face mask does hair extensions to a customer at a hair salon in Tel Aviv, as Israel exits a third lockdown due to the COVID-19 pandemic, on February 7, 2021. (Miriam Alster/Flash90)

The ICF was established to unite national commerce, shopping malls, markets, and restaurant organizations in confronting government policy during the lockdown.

Israel’s third nationwide lockdown to curb the spread of COVID-19 was eased on Sunday at 7 a.m. after over a month, as the country continued to grapple with thousands of daily new cases.