The number of COVID-19 patients in serious condition dropped below 100 on Monday, the lowest level since last July as Israel’s world-leading vaccination campaign continued to show its effect.

According to Health Ministry data there were 93 people whose condition was defined as serious as of Tuesday morning, with 58 of them on ventilators.

There were 61 new coronavirus cases diagnosed in the country on Monday, with a further 22 since midnight, taking the total number since the pandemic began to 838,664. There were 1,259 active cases.

According to the ministry, 37,903 coronavirus tests were conducted Monday, with 0.2 percent returning positive.

Illustrative — Clalit Health care workers take test samples of Israelis to check if they have been infected with the coronavirus, in a testing center in Modiin Illit, on September 7, 2020. (Yossi Aloni/FLASH90)

With its aggressive vaccination drive, Israel has seen a sharp drop in daily mortality and infection rates since the pandemic peaked in late January.

According to the Health Ministry, 5,060,309 people have now received two doses of the vaccine, accounting for over 60% of the total population and more than 80% of the eligible population over the age of 16. A total of 5,407,202 people have received at least one shot.

The country is preparing to start vaccinating children aged 12-15 as soon as the US Food and Drug Administration approves vaccine use for children in that age bracket, which a US federal official said Monday was expected for the Pfizer vaccine by next week.

On Monday, regulations banning travel to seven countries over fears of importing COVID-19 variants into Israel went into effect. 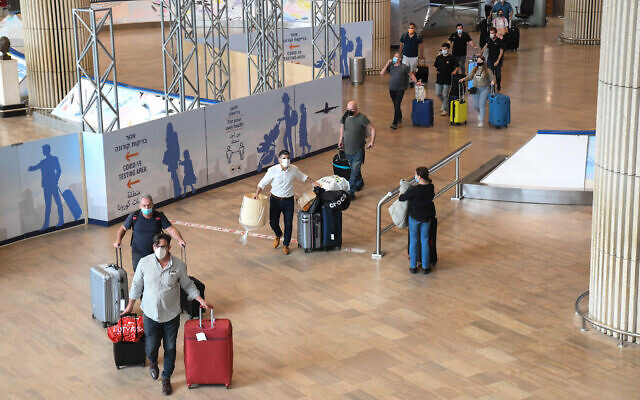 Travelers walk to a coronavirus testing area after arriving at Ben Gurion Airport on March 8, 2021. (Flash90)

Israelis cannot travel to India, Mexico, South Africa, Brazil, Ukraine, Ethiopia, or Turkey unless they receive special permission. They may take connecting flights through those countries, provided the layover is shorter than 12 hours.

Special permission may be provided for those with humanitarian reasons, athletes or emissaries for national institutions.

Israelis returning from those seven countries — even those vaccinated or recovered from the virus — must enter 10 days of isolation with two negative PCR tests or 14 days with one test taken upon arrival in the country. The vaccinated or recovered do not need to self-isolate if they merely took a connecting flight through those countries, provided the layover was shorter than 12 hours.

Health officials had wanted travelers from those countries to be compelled to quarantine at government-run hotels, but that measure was not passed.

The move came in the face of the new coronavirus variant devastating India. The Foreign Ministry said Monday that it is sending planeloads of medical equipment, including respirators, oxygen generators, and medicines to India, where the health system is collapsing under a wave of resurgent coronavirus infections. 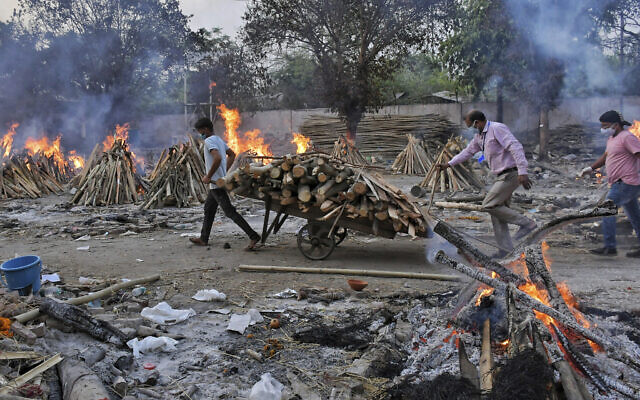 A worker carries wood on a hand cart as multiple funeral pyres of COVID-19 victims burn at a crematorium on the outskirts of New Delhi, India, May 1, 2021 (AP Photo/Ishant Chauhan)

A top health official said last week that it was not clear that COVID-19 vaccines offer protection against the Indian variant. Last week, Israel identified 41 cases of the Indian coronavirus variant, including five in children, and five among people who were fully vaccinated.

According to a ministry statement, 24 cases of the mutated strain were found among people who returned recently from abroad, including 21 foreign residents. But 17 of those infected hadn’t been abroad, and some of them had no obvious links to anyone who did, indicating that the variant is spreading undetected.

Moreover, five kids from five schools were diagnosed with the Indian variant. Since the vast majority of children under 16 are not yet being vaccinated, this has raised fears of a new outbreak after infections have been steadily dropping for several months following the country’s rapid inoculation campaign.