Doctors have been able to discharge seriously ill patients from the hospital sooner during the latest wave of the pandemic than they were during previous stages, according to statistics published by an Israeli TV station Wednesday.

While seriously ill patients spent 10 to 12 days on average in the hospital for the first six months of the year, that number dropped to roughly eight days on average during the first week of July, according to Channel 12.

The newest figures are from a much shorter period of time, but they indicated that the latest uptick in cases caused by the Delta variant of the coronavirus is not as severe as previous waves over the past year and a half.

The data also may allow health officials to hold back on plans to recommend implementing more drastic restrictions given the rise in seriously ill patients in recent weeks. While the number of total cases has gone from a handful a day in May to over 1,400 on Tuesday, the number of seriously ill patients — the key factor off which the government has based its strategy for managing the pandemic — has seen more modest rises.

According to Health Ministry data published Wednesday, there were currently 144 patients hospitalized across the country due to the coronavirus, including 68 people in serious condition. Roughly 60 percent of those hospitalized were vaccinated, according to a ministry report Wednesday.

Eighteen of the hospitalized patients no longer tested positive for COVID-19 but remained ill due to complications related to the virus and were therefore included in the Health Ministry statistics.

Israelis wear protective face masks as they walk through the Carmel market in Tel Aviv, on July 20, 2021. (Miriam Alster/FLASH90)

Three pregnant women were currently hospitalized due to the coronavirus as well as two mothers who recently gave birth — all of them were in good condition.

Of the 12 patients currently hooked up to respirators, eight of them were not vaccinated, the data showed.

Twenty Israelis have succumbed to the coronavirus thus far in July. Fifteen of them were vaccinated with both doses and five were not inoculated at all. A total of 6,454 people have died in Israel from the coronavirus since the start of the pandemic.

According to Health Ministry figures updated on Wednesday, 1,410 people tested positive for the coronavirus the day before. Over 1.7% of tests came back positive, though the Kan broadcaster reported that testing centers were being overwhelmed.

Over 76,000 tests were performed Tuesday, the highest amount since early March. The resilience of the testing regime will be a key factor is Israel moves forward with plans to reimpose the so-called Green Pass system, limiting entry to gatherings of 100 people or more to those who can prove vaccination or recovery, or who have tested negative in the previous two days.

Channel 13 reported that 12-year-olds, who are eligible for vaccination, will not be included in the updated green pass rules, drawing questions over how effective they can be.

The government’s coronavirus cabinet is slated to convene on Thursday for the first time in nine days to discuss the possible additions to the list of restrictions aimed at curbing the latest wave.

During the meeting, Health Ministry officials will also present their recommendations on expanding the list of countries Israelis are forbidden from flying from.

Channel 12 reported that the Health Ministry was slated to add the UK, Cyprus, Morocco and Turkey to its no-fly list due to significant upticks in cases in those countries.

The countries that are currently off-limits for Israelis are Uzbekistan, Argentina, Belarus, Brazil, South Africa, India, Mexico and Russia. Israelis who enter after visiting any of those countries can face a NIS 5,000 ($1,500) fine. 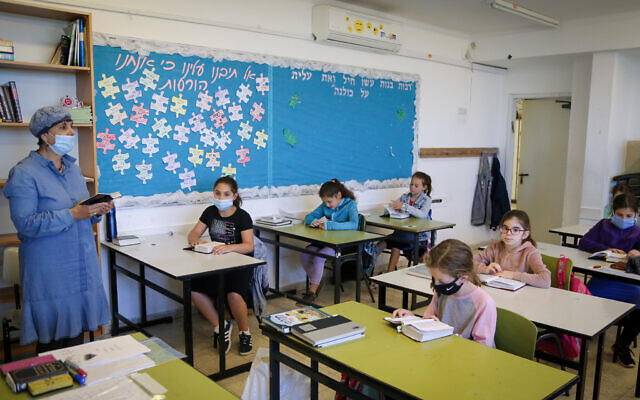 Israeli students at the Orot Etzion school in Efrat wear protective face masks, as they return to school on May 3, 2020. (Gershon Elinon/Flash90)

As of last week, those returning from 15 countries deemed to have high infection rates were required to quarantine for the full seven days even with a negative test result, according to the ministry’s updated guidelines. The full quarantine period was recently shortened from the previous 10-14 days.

Channel 12 reported Wednesday that the Health Ministry is considering adding the United States to the latter list.

According to Health Ministry data, 130 of the 150 Israelis who tested positive upon returning from abroad had been visiting countries that were not even on Israel’s current no-fly list. 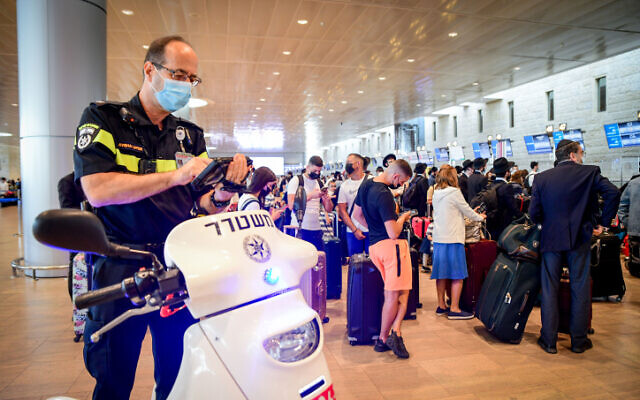 Meanwhile, the Health Ministry has told HMOs that starting August 1, any Israelis over 18 receiving their first shot will receive Moderna’s coronavirus vaccine, according to Hebrew media reports.

Anyone getting their second shot or between 12 and 18 years old will continue to get the Pfizer-BioNTech vaccine that Israel has been relying on for its national immunization drive.