Seychelles, the world’s most Covid-vaccinated nation with more than 60 percent of its adult population having received two jabs, has reintroduced Covid-19 restrictions.

All schools have been closed and sporting activities have been cancelled for two weeks in the Indian Ocean archipelago, as infections continue to surge.

Measures will also include a ban on house-hold mixing, some types of gatherings, and the early closure of shops, bars and casinos. Non-essential workers are also being encouraged to work from home, and an 11 pm curfew will remain in force.

The new restrictions come despite the country fully vaccinating over 62 percent of its adult population with two doses, more than any other country in the world.

There are currently 1,068 active cases in the Seychelles, of which 65 percent have been found in either un-vaccinated or people given a single vaccine dose.

However, the remaining 35 percent of cases have been found among people who have taken both covid-vaccine doses, health officials have said.

Seychelles, the world’s most Covid-vaccinated nation with more than 60 percent of its adult population having received two jabs, has reintroduced Covid-19 restrictions. Pictured: A medical worker give the first dose of the Chinese Covid-19 vaccine produced by Sinopharm at the Seychelles Hospital in Victoria, on January 10, 2021

‘Despite of all the exceptional efforts we are making, the Covid-19 situation in our country is critical right now with many daily cases reported last week,’ Peggy Vidot, the nation’s health minister, said during a Monday press conference.

But officials at the press conference did not give much detail about what was causing the rising cases in the country of around 98,000 people, other than saying people were taking fewer precautions against the virus than last year.

The country acted quickly to begin its vaccination program in January, using doses from China’s Sinopharm (BBIBP-CorV) vaccine that were donated from the United Arab Emirates. It also received doses of AstraZeneca from India.

So far, 62.2 percent of its eligible population has been fully vaccinated, with 68.82 percent being given at least a single dose. In both metrics, Seychelles leads globally.

By comparison, Israel in second place has given 55.9 percent of its eligible population two doses of Covid-19 vaccines.

When Seychelles president Wavel Ramkalawan first announced the start of the country’s vaccination drive, it had recorded a total of 531 coronavirus cases and a single death, according to data from its health ministry. 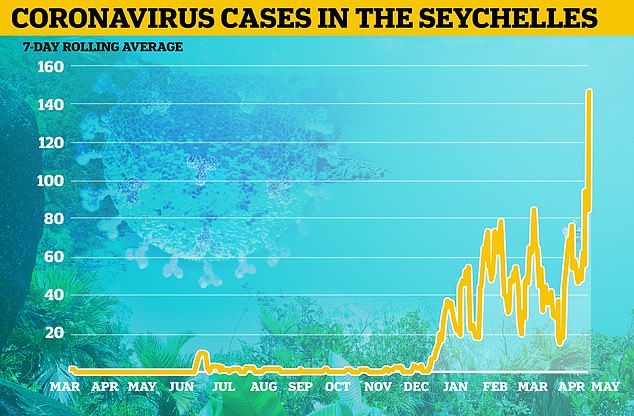 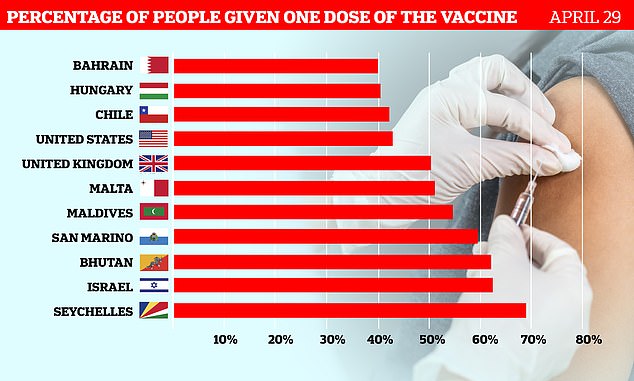 The new restrictions in Seychelles come despite the country fully vaccinating over 62 percent of its adult population with two doses and over 68 percent with one dose, more than any other country in the world

But now, almost four months later and despite the country’s successful vaccination campaign, the country has recorded a total of 6373 coronavirus cases, resulting in a reported 146 deaths.

On Monday, the country recorded its record number new infections of 500 in a single day.

Chile, another country that has been heavily reliant on vaccines developed in China, has also seen rising cases despite its successful inoculation campaign.

The South American country has given at least one Covid-19 dose to 42.44 percent of its population, but saw a third coronavirus wave peak in the middle of April, which has only just begun to recede.

Its use of China’s CoronaVac vaccine – believed to be around 50 percent effective – is thought to have played significant factor in Chile’s case numbers.

China’s Sinopharm vaccines being used in the Seychelles is thought to be more effective, with provisional figures suggesting it was around 86 percent effective against Covid-19.

However, no detailed efficacy data of the vaccine has been published in peer-reviewed journals. 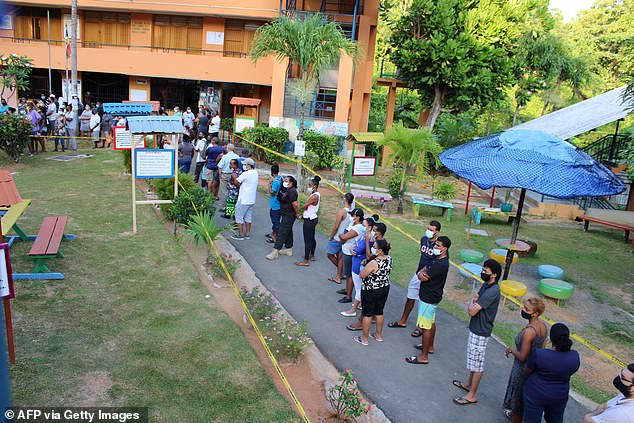 The new measures will also include a ban on house-hold mixing, some types of gatherings, and the early closure of shops, bars and casinos. Non-essential workers are also being encouraged to work from home, and an 11 pm curfew will remain in force. Pictured: People wearing masks queue to vote in the country’s presidential elections last year [file photo]

The new measures were announced by Public Health Commissioner Jude Gedeon in a press conference on Tuesday, following a meeting of the country’s COVID-19 Platinum Committee on Monday.

‘These are an upward trend. We do not know how long it will last but this will depend on what measures are taken and how the new measures are respected,’ she said.

Of the 1,068 active cases in the country, 84 percent are among Seychellois, with 16 percent being among foreigners.

The latest measures – similar to those imposed in the country at the end of 2020 – will be reviewed close to May 24, and depending on the situation will either be lifted or extended, health officials said.

Seychelles, which has a population of around 98,000, is heavily dependent on tourism for much of its foreign trade.

Travel Weekly reported last month that Seychelles could be one of the 30 counties put on the expected travel green list by the UK from May 17.

However, it was later reported by Paul Charles, CEO of travel consultancy The PC Agency, that Seychelles could be one of the countries to stay on the amber list. 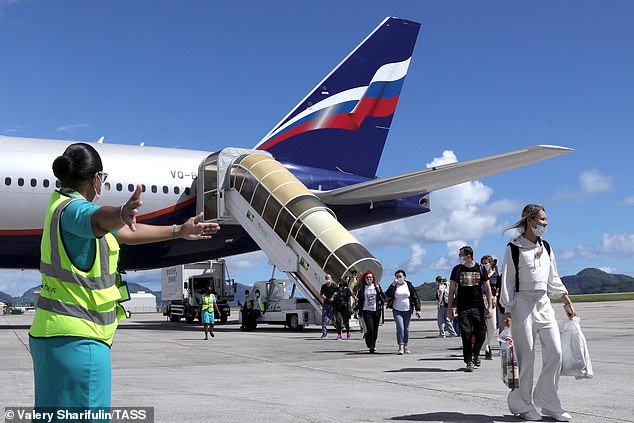 Pictured: Passemgers leave a Boeing 777-300ER plane that has performed the first SU244 flight of Aeroflot – Russian Airlines to Mahe Island since the start of the COVID-19 pandemic, on April 2, 2021

‘We are concerned by possible #India-related infection increases in #Seychelles #SriLanka and #Maldives so these won’t be green on May 17,’ he wrote.

Officials said during the press conference that the Family Hospital at Perseverance – the main COVID-19 treatment centre in Seychelles – is running at its capacity.

‘This means the amount of bed we have to expand. It is for this reason that we are looking at another possibility for patients at the Anse Royale Hospital,’ explained Peggy Vidot.

‘Obviously when we have a pandemic like this, and we have seen the number of health workers infected, there will always be workers who are off because they have got the virus or is a contact, so this is always a pressure on human resources.’

Vidot added: ‘For the time we are assuring the public that with our current capacity we can continue our services.’

Health professionals in the country have renewed their call for its citizens to cooperate by wearing masks, sanitising their hands, to practise social distancing and to abide by the new restrictions to limit community transmissions.