Avigdor Hayut and David Levy, who both lost sons at the Mount Meron disaster over the weekend, met on Sunday in Bnei Brak amid their shared grief.

Hayut was at the pilgrimage site on Lag B’Omer with his son Yedidia, 13, and his son’s friend Moshe Levy, 14. Both Yedidia and Moshe were killed in the crush that claimed the lives of 45 people early Friday morning.

“We lost two sons. I did what I could,” Hayut sobbed to Levy as they met for the first time since the tragedy, when Hayut came to pay a shiva call to the Levy family in Bnei Brak.

“We held hands the entire time, until we fell and were thrown to the floor,” recounted Hayut, who teaches at the yeshiva where both boys studied. “Moshe and Yedidia were separated from us. I lost them. He was like my son,” added Hayut, who arrived at the Levy home in a wheelchair due to his injuries from the incident. 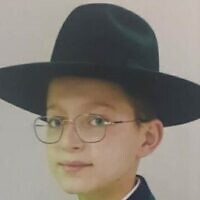 Moshe Levy, 14, who was killed in the crush at Meron (courtesy)

David Levy told the Kan public broadcaster that his son begged for years to be allowed to attend the festivities at Meron on Lag B’Omer, and went this year as a reward for excelling in school. “He was a good kid. An angel. Everyone loved him, his friends loved him.”

Hayut arrived at Mount Meron with the two boys as well as his younger son, Shmuel. “We were dragged into the crowd,” Hayut recalled to Kan. “I saw that it was extremely crowded and things were getting out of control, so I made the decision to leave with the kids.” 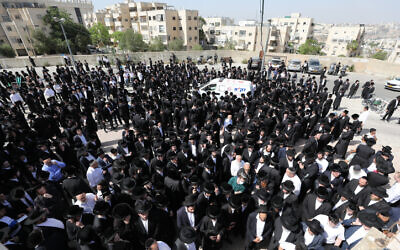 Hundreds of Haredim at a funeral in Jerusalem for one of the victims of the Meron tragedy, April 30, 2021 (Olivier Fitoussi/Flash90)

Hayut said he and the three children were quickly “sucked into the crowd. At a certain point my younger son and I were thrown to the floor. That was when we lost Yedidia and Moshe. Everybody who was behind us fell one after the other. I couldn’t breathe. I heard my son screaming, ‘Dad, I’m going to die.’ I was trying to encourage him, even when I felt like the end was near, and I was losing feeling in my body.”

Hayut said that as he was lying on the ground, unable to move, he did not know what had happened to Shmuel, Yedidia or Moshe. Once Hayut was brought to the hospital, he continued frantically searching for information about the children.

While Shmuel made it home largely unscathed, Hayut couldn’t track down Yedidia or Moshe. “It wasn’t until Friday afternoon, when my brother identified his body at the Abu Kabir Forensic Institute, that we knew what had happened.”

Yedidia was buried in Bnei Brak on Saturday evening, and Hayut was released from the hospital to attend. Moshe was laid to rest on Friday in Petah Tikva.

The victims of the Lag B’Omer disaster included at least a dozen children and teens, including two sets of brothers, as well as young fathers and rabbis. At least 10 foreign citizens were killed in the tragedy — six Americans, a British national, two Canadians and an Argentinian.