Senior Palestinian officials arrived in Cairo on Sunday to discuss how the first Palestinian national elections in 15 years would be conducted.

“We are at a turning point in the Palestinian struggle,” senior Hamas official Khalil al-Hayya pledged to Hamas-linked Safa News, at the Rafah crossing with Egypt on Sunday morning.

Palestinian Authority President Mahmoud Abbas issued a decree in mid-January ordering three successive rounds of Palestinian national elections. The first round — for the currently defunct Palestinian legislature — is set to be held on May 22.

Observers are skeptical that elections will indeed happen, as several election promises have fallen by the wayside before. But Fatah officials respond that this is the first time Abbas has issued a formal election decree in more than a decade.

“People and observers have the right to be skeptical. But now that the decree has been issued by our side, we will fulfill it on schedule,” senior Fatah official Azzam al-Ahmad told The Times of Israel in his Ramallah office in late January.

Negotiating teams led by Fatah Secretary-General Jibril Rajoub and Hamas deputy chief Saleh al-Arouri left for the Egyptian capital on Sunday to begin election talks. Representatives of other Palestinian factions, such as Islamic Jihad and the Popular Struggle Front, will also attend.

But numerous issues split the rival Palestinian movements, who have not successfully held a national election since Hamas’s landslide victory in the 2006 Palestinian legislative elections.

“The Cairo talks are an attempt to remove the obstacles in the way of the elections, given that they are being conducted in light of the continuing divide,” al-Ahmad said.

The terror group’s victory led to a brief, tense unity government between the two sides. The international community boycotted the government because Hamas is a terror group committed to violent struggle against Israel.

“We have tried to make agreements for reconciliation before doing elections — in 2011, in 2014, in 2017. It did not succeed, so we’re trying something else,” senior Palestine Liberation Organization official Ahmad al-Majdalani told The Times of Israel, after the election announcement in January.

Al-Ahmad indicated that Hamas’s participation in any Palestinian government would depend on the terror group’s adoption of the Palestine Liberation Organization platform, which renounces violence and recognizes Israel’s right to live in peace and security.

Hamas, which avowedly seeks Israel’s destruction, has yet to signal any intention to do so. 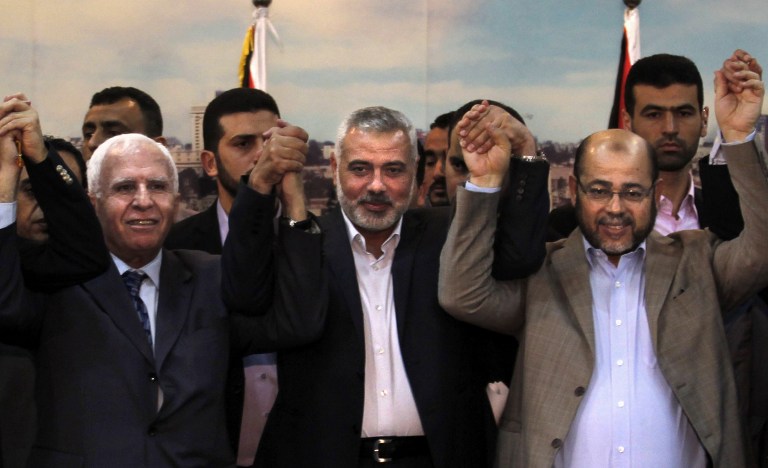 One of the most intriguing possibilities that could be worked out in Cairo is the potential establishment of a joint list between Fatah and Hamas to run in the May legislative elections.

Rumors have fluttered through Palestinian media for weeks Hamas and Fatah were planning on presenting a joint list. A prior agreement between the two major Palestinian factions would make the results far easier to control — a win-win for both risk-averse movements.

Fatah Secretary-General Jibril Rajoub told Palestine TV in an interview last week that, while no decision had yet been made on the subject, his faction was heading to Cairo “with their hearts open to any possibility.”

Asked directly about the possibility of Fatah-Hamas merger, Al-Ahmad did not rule out a joint list between Fatah and Hamas, but suggested that Hamas was unlikely to agree to it given Fatah’s conditions: Hamas alignment with the PLO’s political program.

“We have proposed it since 2014… But I don’t believe Hamas wants to. They say again and again that they’ll look into it, but that means they don’t want to do it,” Al-Ahmad said.

The rumors immediately drew harsh criticism — including from some senior officials within Fatah.

“It is not democratic, it ignores everything that happened in the past and it is not politically possible. It smacks of opportunism and personal interests at the expense of the people’s interests,” charged Fatah Central Committee member Nasser al-Kidwa in a statement condemning the idea.

The delegations in Cairo are said to be preparing to discuss numerous technical issues as well over the next two days. 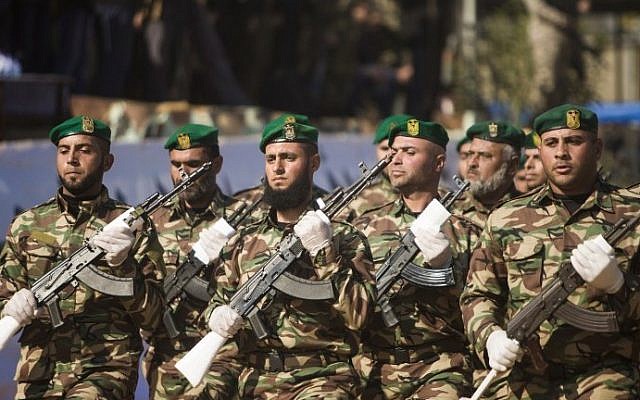 Members of the Palestinian Hamas security forces take part in a graduation ceremony in Gaza City on January 22, 2017. (AFP/Mahmud Hams)

Both sides operate their own judicial system and their own security forces, and both deeply mistrust the other. In order to run the election, however, said Palestinian political analyst Jihad Harb, they will need to collaborate on both issues.

“In both the West Bank and the Gaza Strip, the two sides will need to agree on who will serve as the police for the polling places. There’s also a need for an independent elections court to authorize the results and resolve electoral disputes. So far, no solutions have yet been reached for those issues,” said Harb.

For the 2006 elections, international monitors fanned out in Gaza, the West Bank, and East Jerusalem. But with the Palestinians now split, the potential for armed voter intimidation is likely higher.

Al-Ahmad suggested that Egypt, whose intelligence services regularly mediate between Israel, Hamas, and the Palestinian Authority, could potentially play a key role monitoring in Gaza.

Asked whether Ramallah would permit Hamas activists to campaign openly in the West Bank, al-Ahmad said, “Of course — and if we lose, we’ll hand it over to them, as well.”

Harb, however, said that he had yet to see a serious commitment from both sides to a free and fair election.

The election courts are likely to be another site of contention. Critics charge that days before the election decree was issued in mid-January, Abbas forced a number of judges into early retirement and placed a confidant of his in charge of the Supreme Judicial Council, who would likely have the power to appoint the Election Court.

Anticipating defeat in 2006, Abbas effectively drained an independent court of its powers to constrain the presidency.

“There are certainly concerns that we’ll see a repeat of the use of the courts that we saw in 2006,” Harb agreed.