The military has ordered all Israelis to vacate the outpost of Evyatar, which has been built and demolished several times since it was first erected in 2013. It has also banned any construction at the site, which was renewed several weeks ago following the murder of Yehuda Guetta, 19, in a West Bank terror attack. According to Channel 12 news, 47 families have relocated to the illegal hilltop community near Tapuah Junction.

Shas MK Moshe Arbel on Monday defended his actions, citing what he described as rampant illegal building in the area by local Palestinians.

“When I contact the defense minister and he tells me that there are no regulations and we cannot enforce the [illegal] Arab construction, then the order that bans, exclusively for Jews, building and bringing in construction materials is not legitimate,” said Arbel. “I used my parliamentary immunity to help form the settlement. We came here to build up this country.”

The land adjacent to the Tapuah Junction in the northern West Bank where the Evyatar outpost stood prior to being razed hours earlier. (Courtesy: Tzvi Succot)

Arbel also urged other lawmakers to join the effort. The military is expected to demolish the makeshift structures that were erected at the site.

The outpost was first established several weeks after the April 2013 murder of Evyatar Borovsky, a father of five from the settlement of Yitzhar, by a Palestinian terrorist at the Tapuah Junction.

Security forces first evacuated the outpost two weeks later, and, according to the settlers, it remained uninhabited until its reestablishment in 2018. 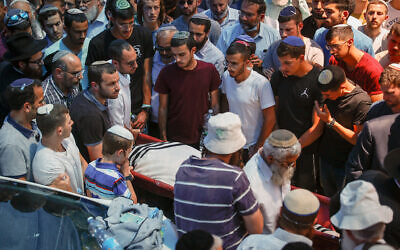 Friends and family mourn at the Jerusalem funeral of Yehuda Guetta, who was killed in a terror attack at Tapuah junction in the West Bank, May 6, 2021. (Yonatan Sindel/FLASH90)

Several days after the fatal stabbing on February 5, 2018, of Itamar Ben-Gal, a father of four from the Har Bracha settlement, a group of settlers from the northern West Bank decided to rebuild it in his memory, as well as in commemoration of Raziel Shevach. Shevach, a father of six from the Havat Gilad outpost in the northern West Bank, was gunned down by Palestinian terrorists in a drive-by shooting outside his community on January 9, 2018.

Guetta was killed in a drive-by shooting at Tapuah Junction last month, prompting the rebuilding at the outpost.