Religious Zionism leader Bezalel Smotrich on Wednesday called upon Prime Minister Benjamin Netanyahu and his former ally Gideon Sa’ar, the leader of the New Hope party, to “sort out their differences” in order to establish a new government.

“If you do not know how to get along with each other, the decision will go to your enemies, the supporters of terrorism, who deny the existence of the State of Israel as a Jewish state,” Smotrich wrote, apparently referring to the majority-Arab parties Ra’am and the Joint List.

“I call and plead with you from the bottom of my heart: Give this good nation an Independence Day gift, and meet today,” Smotrich said, just two hours before Memorial Day was set to end and transition into Independence Day.

“Sort out your differences, listen to the [potential] historic event, and prove you are fitting for it,” he added.

Sa’ar, a former Likud minister, has so far rebuffed Netanyahu’s appeals to junk New Hope’s campaign pledge to not join in a government led by the incumbent prime minister.

With Netanyahu lacking a majority, multiple — and mostly improbable — scenarios have been floated on how to reach the magic number of 61, including relying on outside support from the Islamist Ra’am party, despite opposition from far-right lawmakers; trying to recruit “defectors” from other parties; and trying to get the New Hope party to join such a coalition.

On Monday, Yamina party leader Naftali Bennett said his party supports the formation of a right-wing government with Likud, but stressed that averting a fifth round of elections in two years was his overarching goal, implying he could yet join Sa’ar and the center-left should Netanyahu fail to cobble together a coalition. 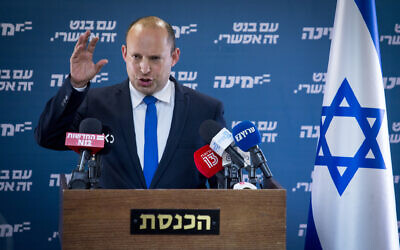 Head of the Yamina party Naftali Bennett speaks during a faction meeting at the Knesset, the Israeli parliament in Jerusalem, on April 6, 2021. (Olivier Fitoussi/Flash90)

If Netanyahu does not succeed in forming a government within 28 days, the president can either task a second person with the attempt (for another period of 28 days and a possible additional 14), or send the mandate back to the Knesset, giving the legislature 21 days to agree on a candidate supported by 61 MKs.

Rivlin has intimated that he may not give the mandate to a second candidate if Netanyahu fails, but rather immediately send it back to the Knesset.