Religious Zionism chairman Bezalel Smotrich said Thursday that he has “a problem with LGBT culture” and appeared to compare gay marriage to incest.

Smotrich, who has a history of controversial statements on the issue, was asked in an Army Radio interview for his reaction to comments made by his far-right party’s No. 11 candidate, Eldad Rabinovich. Rabinovich had spoken out against the openly gay Public Security Minister Amir Ohana (Likud) and said the Religious Zionism party would work to “restore naturalness” to Israeli society.

The interview quickly turned hostile as Smotrich refused repeatedly to answer whether he views Ohana as “natural.” The Religious Zionism leader said he respects Ohana as a human being and considers him a friend, but has a “debate over values” with him and the broader LGBT community.

One of the Army Radio interviewers then called Smotrich and his party “racist” for refusing to grant equal rights to the community.

“Yes, there are individual rights and those are important, but beyond that there are also values and public interests. There is also a social structure that can and should be debated,” he shot back. “You and your friends’ inability to demonstrate tolerance for my views — you are a thousand times more radical than me.”

Israelis wave flags and hold signs during a rally in Tel Aviv to protest against the exclusion of gay men from a recently passed surrogacy law on July 22, 2018. (AP Photo/Sebastian Scheiner)

Smotrich then asked the interviewers whether the State of Israel would approve a marriage between a brother and a sister or between a mother and her son, apparently likening gay marriage to incest.

When they both replied no, the Religious Zionism leader said this proves that they are “racist.”

Smotrich, who has served in the Knesset since 2015, rose to national prominence almost a decade earlier when he organized the “Beasts Parade” in protest of LGBT pride. He later apologized for his involvement.

He defended his inclusion of the Kahanist Otzma Yehudit party and the anti-LGBT Noam faction on his party slate, saying he had “demonstrated responsibility” on behalf of the right-wing bloc to make sure the votes of the most fringe elements in Israeli society don’t go to waste. Recent polls have indicated Religious Zionism would scrape above the electoral threshold to win four seats.

A deputy minister in Netanyahu’s Likud party on Thursday rejected Smotrich’s comment on the LGBT community.  “I do not accept these statements. This is not the agenda of Likud,” said Yoav Kisch.

Anti-Netanyahu, but not anti anti-LGBT

But it wasn’t just in the pro-Netanyahu bloc that candidates found themselves stumbling over questions related to LGBT rights.

Yisrael Beytenu chairman Avigdor Liberman was asked during a Channel 12 interview Wednesday to respond to allegations made by businesswoman Nicol Raidman, who accused the leader of the right-wing secular party of being unable to sit in the same room with her gay friends.

Rather than refuting the claim, Liberman said, “There are more serious things [to discuss]. We will address this whole story after the election.” 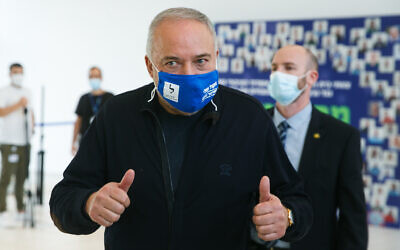 Weighing in on the controversy, Labor chairwoman Merav Michaeli told Army Radio on Thursday, “All the leftists who are voting for Liberman because he is against the Haredim should take into account that he’s not a liberal.”

Later Wednesday, though, Liberman tweeted a clarification. “Yisrael Beytenu is in favor of full equality for the LGBT community, including via a civil marriage and divorce law that we submitted twice in the outgoing Knesset.”

Also facing pushback from LGBT activists on Wednesday was Joint List chairman Ayman Odeh. He was asked at a campaign event in Tel Aviv what his party would do to protect the rights of a group often marginalized in the Arab community. 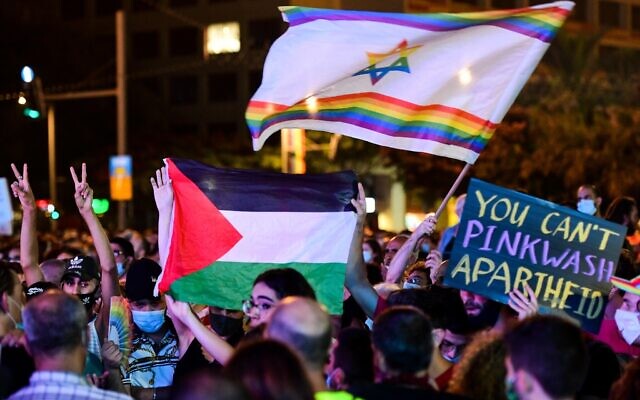 Israelis, including participants with a Palestinian flag, attend in a protest rally for LGBT rights in Tel Aviv on June 28, 2020. (Avshalom Sassoni/Flash90)

Odeh noted that he opposes all anti-LGBT violence and that his Hadash faction within the Joint List voted in favor of legislation to bar gay conversion therapy, a move that drew heavy criticism in the Arab public.

“We have a value-based stance against discrimination of any kind. I was not elected to the Knesset to interfere in people’s private lives,” he said.

“At the same time, I ask that you understand us Arab citizens — this issue is very sensitive for us. Think of the Jewish public in the 1970s, 1980s, 1990s, and I ask you to be practical, to read reality and know how to change reality from within rather from above. Now we need unity to fight tough struggles like violence and crime. Let us choose the unifying path and we will find a formula that respects human beings,” Odeh added. 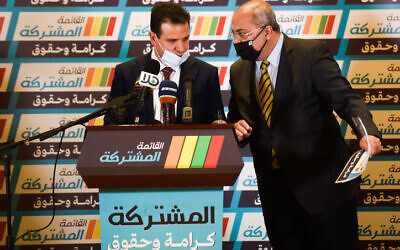 But the remarks did not impress the young crowd, which included several members of the Arab LGBT community who shouted at the Joint List chairman for refusing to answer directly.

They also expressed their disgust over Odeh’s refusal to condemn remarks of his party’s No. 2, Ahmad Tibi, who said he would not support legislation to benefit the LGBT community.

“You ask for tolerance from Jews, but what about me? What about my brothers and sisters who suffer from violence?” said one of the hecklers, who later walked out of the event in protest.

“The fight against the occupation and the fight for the rights of the LGBT community should be fought in unison,” said another protester.

A Joint List adviser told Channel 12 after the event that Odeh was hesitant to take a clearer stance on the matter because he was afraid of losing votes to the Islamist Ra’am faction, which split away from the Joint List several months ago and has made combating LGBT rights a major point of its campaign.

More polls have been indicating that Ra’am will manage to cross the electoral threshold with four seats, while the Joint List — which is an alliance of three parties, Hadash, Ta’al and Balad — is predicted to receive seven to nine.

In the left-wing Meretz party, which has long prided itself as the most pro-LGBT slate in the Knesset, the issue has also caused conflict.

The left-wing party’s No. 4 candidate, Rinawie Zoabi, told the Kul al-Arab station last week that she’d abstain in a vote banning conversion therapy “out of respect” for the Arab public from which she came.

Later that day, the party released a video of a somber Zoabi assuring voters that she would in fact support such legislation and back every effort in support of LGBT equality.