Israeli security officials believe dozens of weapons seized on the Lebanese border overnight as they were being smuggled into the country were destined to be used in terror attacks inside Israel, according to television reports on Saturday.

According to Kan and Channel 13 news, officials believe the weapons and ammunition were meant for Arab Israeli terror operatives, with backing from Lebanese terror group Hezbollah.

Security officials told Channel 13 the captured cache was “the largest smuggling attempt in years.” Channel 12 was told defense officials couldn’t remember such a significant attempt, in terms of the number of weapons involved and their quality.

Overnight Friday, security forces foiled the attempt to smuggle, from Lebanon into northern Israel, 43 handguns and ammunition worth some NIS 2.7 million (approximately $820,000), according to police estimates.

Police and the Israel Defense Forces announced on Saturday they were investigating whether it was carried out with the help of Hezbollah.

As Lebanon faces a major financial crisis, Hezbollah is believed to prefer arming others for an attack within Israel, rather than direct aggression on the border, officials told Channel 12.

A Hezbollah attack on the border itself would likely result in a clash with the Israeli army, which could lead to an all-out war in Lebanon.

Lebanon is grappling with a raft of shortages, including gasoline, and the government is discussing lifting subsidies it can no longer afford, amid what the World Bank said is one of the worst financial crises since the 1850s.

The local currency has lost more than 90% of its value on the black market, and Lebanese state electricity companies are providing less than five hours of electricity a day in most areas, as they struggle to come up with the foreign currency for fuel imports.

Lebanon has been without a government ever since the previous one resigned, after a deadly port explosion last August, but a deeply divided political class has failed since to agree on a new cabinet to lift the nation out of crisis.

The IDF Arabic spokesperson highlighted the monetary value of the weapons confiscated in the bust, as Israel’s northern neighbor faces a major financial crisis.

“How much milk for children, how many diapers, how many liters of fuel, and how much medicine could be bought for the Lebanese citizens with this money?” he added.

Amid the crisis, Hezbollah is suspected to have continued weapon and drug smuggling operations.

Over a dozen attempted weapon smuggling attempts were thwarted along the northern border since the beginning of 2021, with over 120 rifles and pistols confiscated, according to the police.

However, security officials believe that a number of attempts have been successful, according to Kan.

Last month, Israel arrested a suspect and seized a number of weapons during an apparently similar smuggling attempt.

According to the police, a resident of Ein Qiniyye, a Druze village in the Golan Heights, was arrested in a field near the town of Metula, adjacent to the border with Lebanon, as he attempted to smuggle a supply of weapons in a tractor under the guise of agricultural activity. Inside the tractor, law enforcement found 12 pistols worth around NIS 500,000 ($140,000). 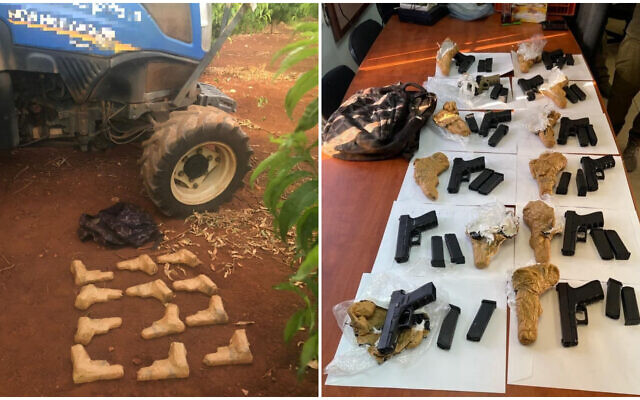 Also last month, Israeli security forces arrested an Arab Israeli father and son suspected of smuggling a large amount of hashish and firearms into Israel from Lebanon, potentially on behalf of the Hezbollah terrorist organization, according to the military.

Earlier this month Adraee pointed toward a senior Hezbollah official by the name of Hajj Khalil Harb as the one responsible for coordinating smuggling attempts into northern Israel.

Harb is a senior adviser to Hezbollah’s chief Hassan Nasrallah, according to Adraee.

The terror group is known to fund its activities through drug sales around the world, including producing large amounts of hashish in eastern Lebanon.