In 2007, author Judy Batalion happened upon a book housed at London’s British Library titled, “Freuen in di Ghettos.” Published in 1946 in New York, it was a collection (in Yiddish) of accounts of young Jewish women who had defied the Nazis through various acts of resistance.

Some were leaders of armed underground cells in the ghettos or fought with partisan groups. Others were couriers who smuggled weapons, information, and false identification documents between ghettos. Others who worked in Nazi offices stole intelligence right out from under their noses. And there were some who assassinated Nazi officials by boldly shooting them point-blank.

Batalion was previously familiar only with the famous Hannah Senesh, whom she had learned about at her Montreal Jewish day school. Senesh was a young Hungarian woman who immigrated to Palestine in 1939 but returned to Europe to fight for the Allies and was captured, tortured and executed.

“Freuen” introduced Batalion to many other Jewish women who,  by choice or circumstance, found themselves involved in espionage or physical resistance against the Nazis.

‘The Light of Days: The Untold Story of Women Resistance Fighters in Hitler’s Ghettos’ by Judy Batalion (William Morrow)

“I’d expected to find a dull, hagiographic mourning and vague, Talmudic discussions of female strength and valor. But instead — women, sabotage, rifles, disguise, dynamite. I’d discovered a thriller. Could this be true? I was stunned,” Batalion wrote in the introduction to her new book, “The Light of Days: The Untold Story of Women Resistance Fighters in Hitler’s Ghettos.” It, as well as a young readers’ edition for ages 10-12, will be published April 6.

Batalion, 43, got a grant to translate “Freuen.” She knew Yiddish, but there was more to it.

“I thought it would take six months, but it took years. It was a very complicated translation. It involved my doing research as I translated, because there was no context in this book whatsoever. I had to look up places, events, names, and so on,” Batalion told The Times of Israel in an interview from her home in New York.

The stories of these women “seeped into my blood over a long period of time,” the author said. 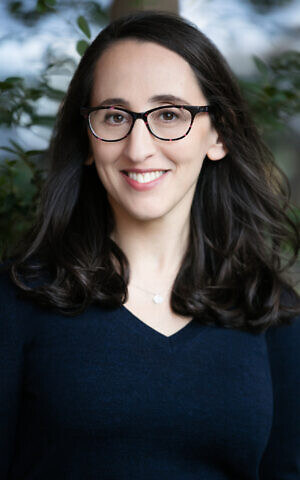 She was fascinated by these women, whose lives and impulses were so different from her own. But she was reluctant to dive into further research, partially because of her family’s own painful Holocaust legacy.

By 2017, the pull of these women’s heroics was too strong for Batalion to resist. Using memoirs, biographies, testimonies, interviews, archival documents, and scholarly books and articles discovered through an international search, Batalion wove together an exhaustive 576-page narrative history of Jewish women resisters in Poland.

Fully aware that there were such women in other European countries under Nazi occupations, Batalion asserted, “I had to draw the line somewhere.”

The detailed “The Light of Days” toggles back and forth among the resistance groups in various Polish ghettos, and the different women providing leadership or support to them. This attention to detail is deliberate.

Batalion wants the world — especially young people — to have access to a full account of the amazing heroism of these women. It’s a corrective to her own lack of knowledge until discovering that treasure found inside the book, bound in worn blue fabric with gold lettering and yellowing edges that was published right after the war and then forgotten. 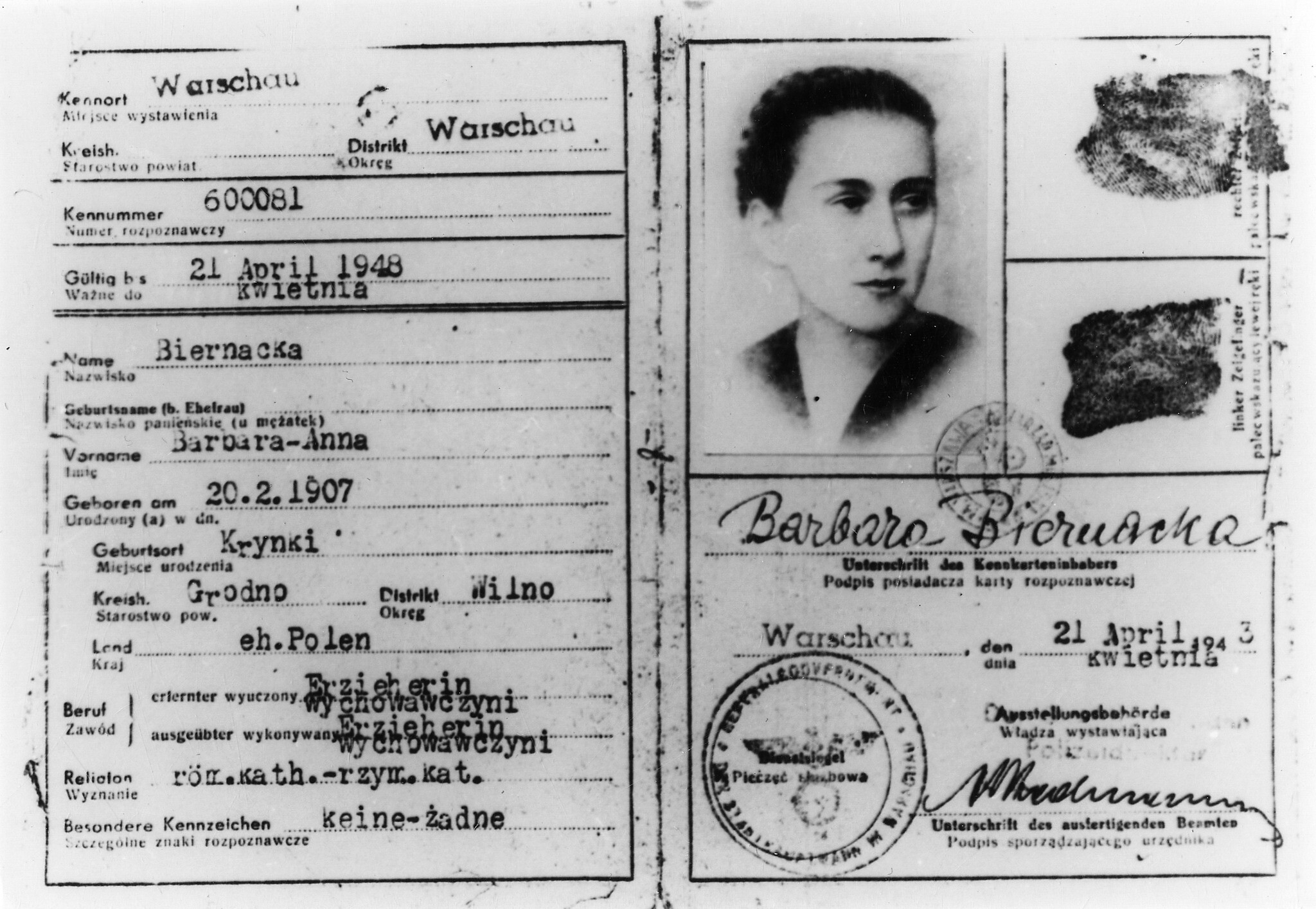 Even after spending years researching and writing “The Light of Days,” Batalion still asks herself, “How did I not know this?”

The Times of Israel asked Batalion about the scope of her book, what prepared the women to resist, and the difference between how male and female resistance fighters are remembered.

The book introduces a huge number of real-life characters, both women and men. In particular, you recount in detail the stories of 20 female members of the Jewish resistance in Poland. What was the reason for being so expansive? 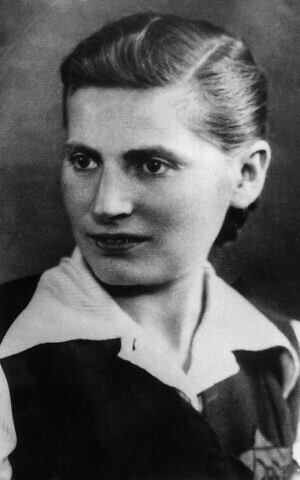 A lot of this was that I felt a great sense of duty, especially for the women who didn’t survive. I often felt like the granddaughter that they couldn’t have.

If I don’t tell the world about Frumka Plotnicka, who was a leader in Warsaw and Bedzin who died shooting Nazis from a bunker, who will? Who’s going to find this random few bits about her in Yiddish and tell the world?

It was also important to convey that this was not three women who did this. This was hundreds, if not thousands, of young Jewish women involved in organized resistance. It was important to show the scope of the story and the different ways the women were involved.

I think often women’s stories are about one women who did such-and-such, but no — this was a sweeping history. A lot of women did this kind of work. I wrote it in a way that showcased that it was a broader story than just a biography.

Many of the resistance fighters were members of Jewish and Zionist youth groups. What was it about the culture of these groups that you think prepared young people to resist?

The nature of the education the young people received here was key. They learned progressive philosophies, collaboration, really seeing who you are, understanding your strengths and weaknesses. It was very psychological. They read Freud and Marx very psychoanalytically. It was very much about knowing and accepting the truth. I was very taken by how similar it was to the progressive philosophies today in education.

Also, they were organized. The youth groups even referred to themselves as families. We don’t have that kind of organization in our lives. Teenagers and young adults were really organized around these groups and their values… This organization was a big part of why they were able to revolt or become militias or underground units.

[Hashomer Hatzair (The Young Guard) leader and fighter in Bedzin] Chajka Klinger wrote about having gone from being groups that were all about creativity and non-violence to ones all about destruction. They had to switch on this fundamental level. 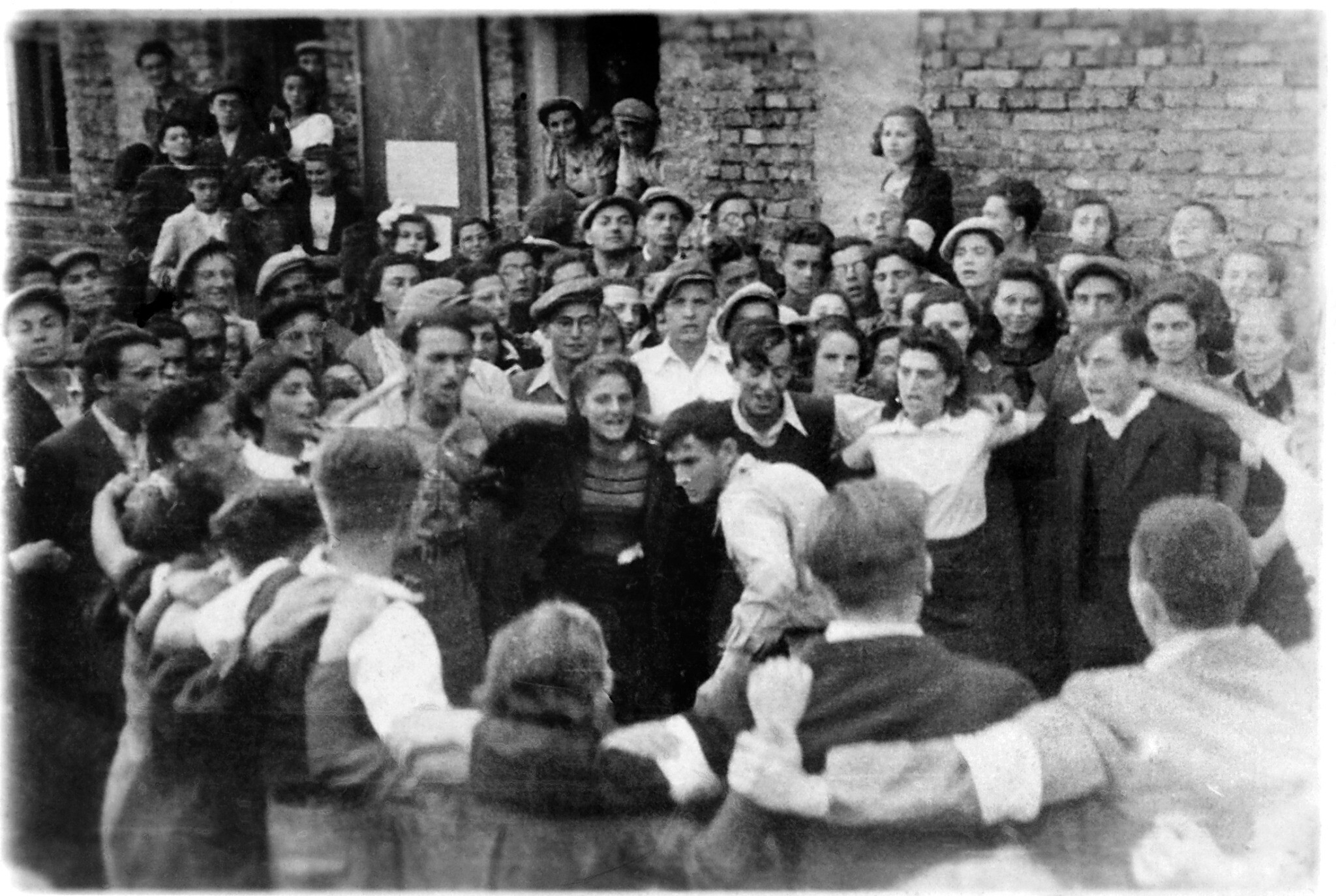 Although women had important roles in the resistance, it seems that the recognized leaders were men, such as Mordechai Anielewicz in Warsaw and Abba Kovner in Vilna. For example, Zivia Lubetkin was the only woman on the high command of the resistance group Żydowska Organizacja Bojowa (ZOB – Jewish Fighting Organization) in the Warsaw Ghetto.

Were the resisters looking to take decisions only from the men? I think they were taking decisions from [women] too. I don’t know. It’s not super clear. There is no documentation of the structure of the underground. I’m working with personal stories, with testimonies and memoirs,  so everyone has their take on who was the leader… these weren’t formalized structures. It’s really hard to answer these questions, because these were underground guerrilla groups in the middle of the Holocaust.

You did extensive research for this book, what were some of the key sources? 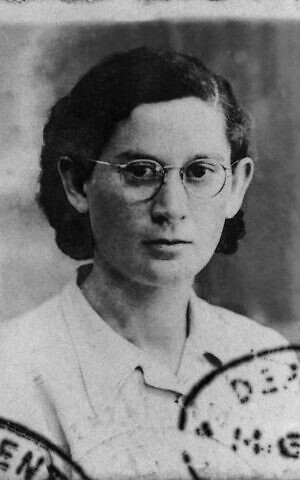 There were some memoirs written during and immediately after the war, like Renia Kukielka‘s book that was published in 1945. Chajka Klinger’s dairies, written in hiding in 1944, are incredible. Gusta Davidson wrote in prison and the women with her hid it under the floorboards and bits of it were later found. Zivia Lubetkin gave a six-hour speech in 1946 that was published as a book after she died (she didn’t want it published in her lifetime). That was also a very important source for me.

Then were the later-in-life memoirs, often written with a scholar or Holocaust historian. I used a number of those that were written in the 1990s and early 2000s, which were more reflective and provided more context and discussion.

Did you come across anything about how these women felt in relation to other Holocaust survivors, particularly those who survived the camps?

Chasia Bielicka [who was an anti-Fascist operative in Bialystok] had survivor’s guilt. She wrote in her book published 10-15 years ago that when she was ready to talk about her experience it was the 1960s, and at that point everyone was talking about Auschwitz and the camps. So, who was she to tell her story? Even though her family was brutally murdered and she was underground in Bialystok running guns from secretly anti-Nazi Nazis to Russian partisans in the forest in broad daylight, she didn’t have it so bad as compared to other people. It was her own repression of her story because she felt guilty that as a courier she wasn’t at Auschwitz.

And there is someone like [courier] Bela Hazan who ended up at Auschwitz imprisoned as a Polish woman [because her cover was never blown], which caused its own layers of complication and difficulty. It seemed that after the war she didn’t really reconnect (from what I understand from her son) with any Dror [Freedom]  youth group comrades. 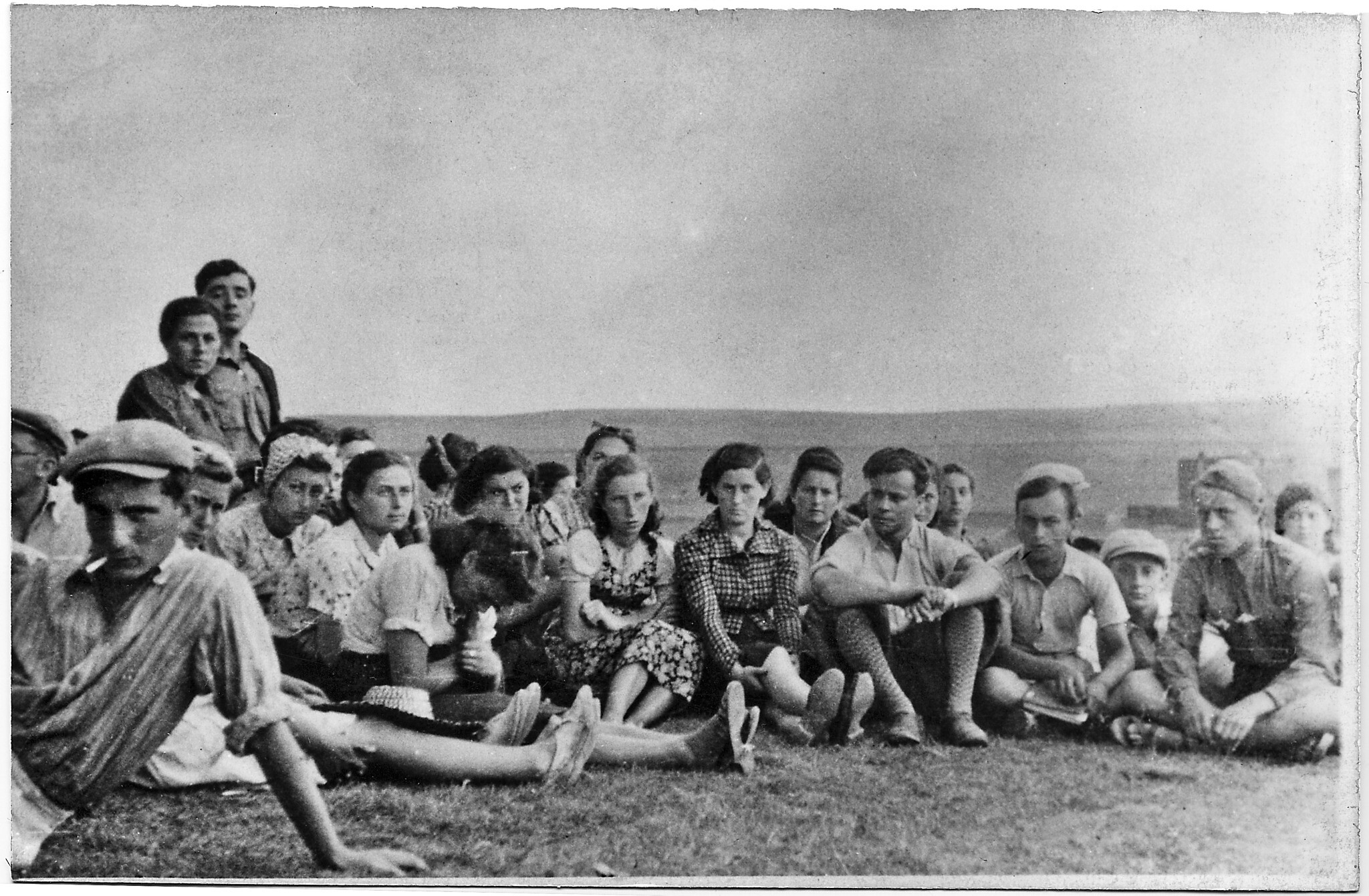 A meeting of Zionist youth at the agricultural training farm in Będzin during the war. Chajka Klinger is in the center. (Courtesy of Ghetto Fighters’ House Museum, Photo Archive)

These young women had something to fight for — the Jewish people — but nothing to live for, because their families were murdered. It’s a striking tension felt throughout the book.

That’s a good insight… It comes down to why fight. They discussed this too. They knew they were not going to beat the Nazis.

Many of them carried cyanide pills with them or an extra bomb with them in the forest. They trained themselves to kill themselves to protect others. They were prepared for death. They were ready to die, or as ready as you can be.