The state-owned Europe Asia Pipeline Company on Monday dismissed concerns of opponents of its deal to pipe Gulf oil through Israel on the way to European markets, telling the High Court that a petition filed by green groups to declare the agreement invalid had “no factual foundation” and that a risk survey found the threat of environmental damage to be “negligible.”

In the petition, submitted in May, three green organizations charged that the Memorandum of Understanding signed by the EAPC with the United Arab Emirates in October should be made null and void given that it was neither discussed nor approved by the government, nor opened for consultation with experts and the public.

The accord provides for the EAPC to transfer crude oil and oil-related products from its Red Sea terminal in Eilat to its terminal in Ashkelon on the southern Mediterranean coast via a land-based pipeline that connects the two.

It is opposed by the former and current environmental protection ministers, the Israel Nature and Parks Authority, the local coastal authorities, a forum of some 20 environmental organizations, scores of scientists and Eilat residents.

The opposition is due in large part to the EAPC’s shoddy environmental record and numerous past leaks — it was responsible, seven years ago, for the largest environmental disaster in Israel’s history when one of its pipelines ruptured, sending some 1.3 million gallons of crude oil into the Evrona Nature Reserve in southern Israel

Employees of the Europe–Asia Pipeline Company clean up the large deposits of crude oil that gushed out of a breached pipeline near the southern Israeli village of Beer Ora, north of Eilat, Friday, Dec. 5, 2014. Israel says a breached pipeline has caused a large oil spill in the southern part of the country. The spill occurred when the pipeline, linking Eilat to the port city of Ashkelon on the Mediterranean Sea, burst. The spill occurred in a dramatic desert landscape featuring steeply rising cliffs near Israel’s border with Jordan. (AP Photo/Tsafrir Abayov)There are also real fears for  Eilat’s coral reefs, with impacts not only to the city’s tourism and employment sectors but also globally.

In its response to the petition, the EAPC said it had commissioned a risk survey, which had shown that “severe damage leading to full loss of the entire content of a tanker or external damage to a tanker and significant loss of content” would only occur once every 366,300 years.

The likelihood of leakage in a pipe carrying fuel to a ship was determined to be so low it would only occur once every 1,111 years, the company went on.

“An insignificant spill,” which was not quantified, was likely to take place once every 24 years. If such a spill happened, said the EAPC, the leak would be pooled and “no environmental damage or marine pollution would be caused at all.”

To support its argument, it claimed that the Jordanian port of Aqaba, adjacent to Eilat, had received some 2,150 oil tankers over the past decade with no reports of any environmentally damaging spills.

The EAPC charged that opponents were determined to paint a distorted picture, with the aim not only of stopping the deal, but of shutting down the company’s entire operation in Eilat, “a facility of strategic and geopolitical importance to the State of Israel.”

That, it said, would threaten the country’s energy security, while cancellation of the specific deal could lead to “significant damage to the foreign relations of the State of Israel.”

As a government company, it claimed that it is not required to report to or receive approval for the agreements it signs from government ministries, “other than those which supervise its activity by law.”

The Finance Ministry, under which the EAPC operates, has said in the past that it had no information about the MOU that was signed.

It claimed that Foreign Ministry officials were updated about the deal both before and after it was signed.

The EAPC went on to reject the petitioners’ claims that its infrastructure of pipes, built in the 1960s, was “old and rusty,” claiming that it was “maintained on a regular basis, meets stringent international standards and is subject to the tight supervision of the Environment Ministry. ”

Going into more detail, the company revealed that it had bought and permanently set up an oil containment boom, approved by the Environment Ministry, which surrounds every tanker while it is docked at port.

These booms act like floating barriers intended to contain an oil spill and allow for relatively easy removal before it pollutes the sea or the shore. 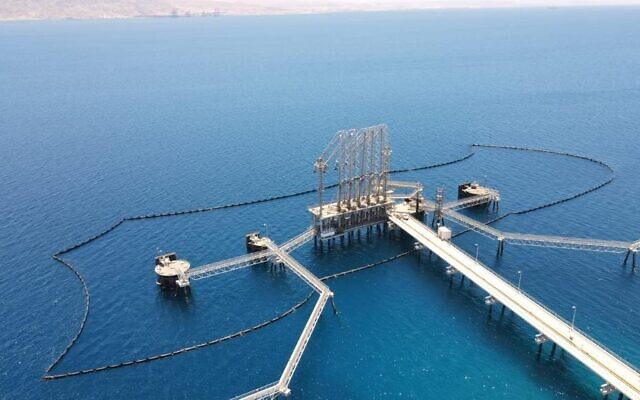 The Europe Asia Pipeline Company’s oil boom in Eilat, designed to catch any potential oil spill before it leaks more broadly into the sea. (Courtesy EAPC)

The company has also spent around $10 million on the purchase of vapor combustion units for its ports in Eilat and in Ashkelon to treat the vapors emitted from ships during loading, and is pouring an additional more-than-$10 million into upgrading the pipeline system in a project that will be completed this year. During the year, it will send a special robot through the pipes to pinpoint where local repairs might be needed.

“The petitioners are alleging anticipated damage to the environment as a matter of absolute faith, requiring no proof based on facts, science or any tangible reality, while ignoring the facts on the ground which attest that the risk of contamination of the Eilat bay from incoming tankers is negligible, and as is the case with any matter of pure faith, it prevails over any other interest or consideration,” it said.

The Society for the Protection of Nature in Israel, which, together with Zalul and Adam Teva V’Din submitted the petition, said, “Unfortunately, statements about the minimal chance of a malfunction or leak are simply inconsistent with reality.”

“We all still well remember well the tar disaster that hit the shores of Israel only a few months ago, as the result of a fault on a ship that was tens of kilometers away from Israel’s shore.”

“One can only imagine what the environmental and ecological damage will be, as a result of a malfunction on a tanker which is only a few meters away from Eilat’s coral reefs.” 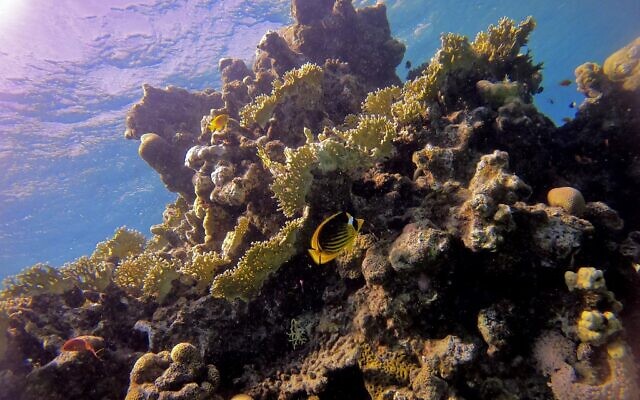 This picture taken on February 10, 2021 shows marine life at a coral reef in the Red Sea waters off the coast of Israel’s southern port city of Eilat. (MENAHEM KAHANA / AFP)

Leehee Goldenberg of Adam Teva V’Din said, “The EPA’s attempts to justify an agreement made without any government supervision at all (including probably the Ministry of Finance, which is entrusted with its supervision) are puzzling.

“Also puzzling in light of the company’s history is the presentation of a risk survey that talks about a pollution event once in hundreds or thousands of years.

“An agreement with such consequences, which the EAPC effectively points to in its response, requires government approval in accordance with the Government Companies Law. Without such approval, the agreement should be canceled.”