The state comptroller announced Monday that he would be opening a special investigation into the disaster at the Mount Meron compound where 45 people were crushed to death last week, saying that the tragedy was “preventable.”

“I intend to launch a special investigation into the circumstances that led to this disaster, the preparation of the various bodies, both this year and during the years that have elapsed since the State Comptroller’s report from 2011,” said Matanyahu Englman at a Jerusalem press conference.

“This is an event that was preventable, and now it is up to us to examine and investigate how and what should have been done to prevent it,” Englman said.

The state comptroller said that the investigation would focus on three main aspects: the conduct of all parties involved, starting with the decision-makers and including law enforcement system, prior to and during the event; the administration of the Rashbi [Rabbi Shimon bar Yochai] compound in Meron over the years; and steps that can be taken to prevent the recurrence of such a disaster in the future.

Englman said that if there was a suspicion of criminal conduct, the information would be passed to the attorney general for consideration.

Additionally, Englman said he would examine any work done by a potential state commission of inquiry into the tragedy.

Forty-five people were crushed to death and more than 150 people hurt, including many in critical condition, in a tragedy at a mass gathering to celebrate the Lag B’Omer holiday at the Mount Meron site in the early hours of Friday morning.

The state comptroller has warned on at least two occasions that the site at the Mount Meron compound was dangerously ill-equipped for the hundreds of thousands who regularly attend Lag B’Omer celebrations there.

A 2008 state comptroller report warned of “systemic failure” at the Meron compound due to “many different authorities all involved in its management,” noting that it was a chaotic situation that would lead to harm to the holy site as well as endangering worshipers. 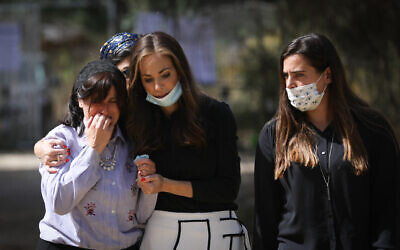 Mourners attend the funeral of Abraham Ambon, one of the victims of the Meron tragedy, where 45 people were crushed to death during a Lag b’Omer event, in Jerusalem, May 3, 2021. (Yonatan Sindel/Flash90)

Engleman’s announcement came amid pressure to form a state commission of inquiry into the disaster.

On Sunday, Defense Minister Benny Gantz appealed to Attorney General Avichai Mandelblit on Sunday to give his legal opinion on the feasibility of forming a state commission of inquiry under the transitional government, saying that “only a state commission will be able to manage all aspects of an investigation into the disaster.” 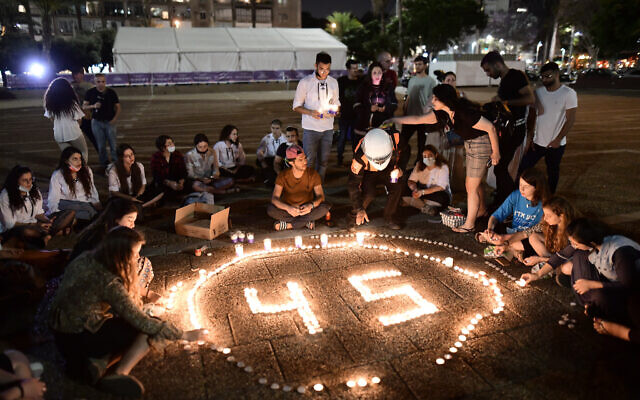 Israelis light candles for the 45 victims who were killed in a crush at Mount Meron during the Lag B’Omer celebrations, at Rabin Square in Tel Aviv. May 2, 2021. (Tomer Neuberg/Flash90)

Prime Minister Benjamin Netanyahu has promised a “thorough” investigation, but he has not responded to the calls for a state commission of inquiry that could require testimony from the political echelon and could issue conclusions and recommendations regarding any political culpability.

According to Channel 12 news, he is expected to oppose a state commission of inquiry, fearing its political consequences.

Earlier Sunday, the Retired Police Commissioners and Major Generals Forum sent a letter to Netanyahu saying that only a thorough investigation examining the role of all bodies involved in organizing the annual event could provide sufficient input to prevent another disaster.

The letter came as the Justice Ministry’s Police Internal Investigations Department began its own probe of the force’s role in the planning and securing of the festival attended by some 100,000 people, principally from the ultra-Orthodox community. IIDP officers toured the site on Sunday.

The Israel Police has also launched an investigation.

Calls for a state inquiry come amid criticism of the government for not taking full control over the Meron site. 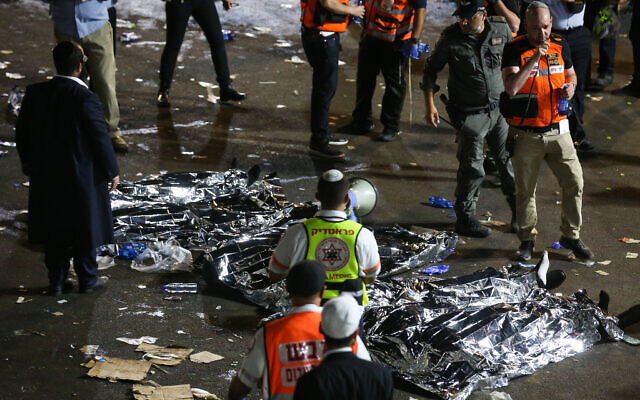 Following the disaster during Lag B’Omer celebrations, a picture has emerged of a facility caught in a years-long tug of war between various authorities, religious sects, and interest groups that left it bereft of proper, unified state oversight, even as constant warning bells were being sounded regarding its potential for catastrophe.

Since the disaster, several former police chiefs have characterized Meron — Israel’s second-most visited Jewish holy site after the Western Wall — as a kind of extraterritorial facility. It was administered by several ultra-Orthodox groups, while the National Center for the Protection of Holy Places, part of the Ministry of Religious Affairs, apparently had some responsibility over it as well, as did the local authority, and the police. But ultimately, no single state body had full responsibility.

Hebrew media reported that Internal Security Minister Amir Ohana, responsible for policing, intends to try and shift the blame for the tragedy to the Supreme Court. 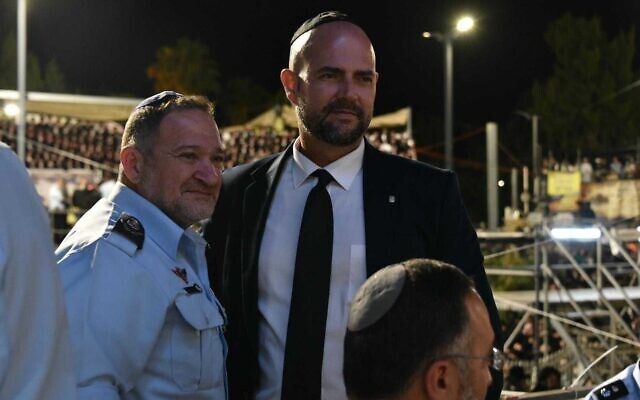 Channel 12 reported that Ohana’s office was collecting information on past appeals to the court in a bid to show that the judges had prevented the state from taking over full control of the site. Ohana denied the report.

The Kan public broadcaster, meanwhile, said that Ohana will argue that even though police presented him with their plans before the event, he does not have the authority to authorize or cancel these plans.

In his first comments on the disaster on Saturday, Ohana said that he bears overall responsibility, “but responsibility does not mean blame.” 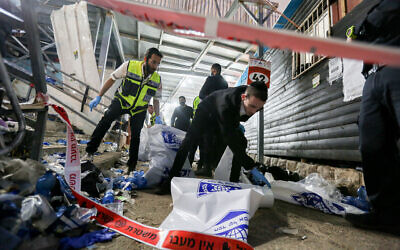 Rescue forces and police at the scene after a mass fatality scene during the celebrations of the Jewish holiday of Lag B’Omer on Mount Meron, in northern Israel on April 30, 2021. (David Cohen/Flash90)

While the head of United Torah Judaism Moshe Gafni defended his own party’s role in the management of the site, he told Channel 12 that he did not oppose a commission of inquiry into the disaster.

Deri indicated in a Thursday evening radio interview, hours before the Meron tragedy, that he had blocked Health Ministry efforts to impose restrictions on this year’s event, Channel 13 reported Saturday. Those restrictions were apparently more related to COVID concerns than the terrifying annual overcrowding.