The state comptroller warned on at least two occasions that the site at the Mount Meron compound was dangerously ill-equipped for the hundreds of thousands who regularly attended the Lag B’Omer celebrations, while an internal police report in 2016 said that the chaos in the site’s management could lead to disaster.

At least 45 people were crushed to death and more than 150 people hurt, including many in critical condition, in a stampede at a mass gathering to celebrate the Lag B’Omer holiday at Mount Meron in the early hours of Friday morning.

However, a 2008 state comptroller report had previously warned of “systemic failure at the Rashbi compound [at Meron]” due to “many different authorities all involved in its management,” noting that it was a chaotic situation that would lead to harm to the holy site as well as endangering worshipers.

The various reports revealed that by standard police safety regulations for public gatherings, the site should not have been permitted to hold more than about 15,000 people. Officials have estimated the crowds at the site on Thursday evening at over 100,000, a number that was even lower than previous years.

An internal police document also warned of the potential for chaos and disaster at the Meron site.

Commander Ilan Mor, head of the operational branch of the national traffic police, produced a report in 2016 titled, “Meron celebrations: Erasing the writing on the wall.” 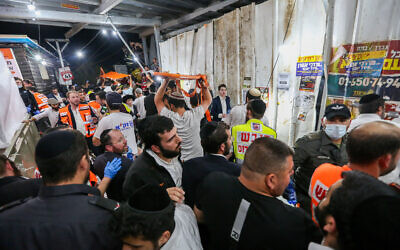 The attorney general announced on Friday that the Justice Ministry’s Police Internal Investigations Department will immediately open a probe into possible police negligence in the fatal stampede.

Attorney General Avichai Mandelblit, in a statement, said “it was decided that the PIID will immediately examine whether there are suspicions of criminality by police in the tragedy in Meron.”

Mandelblit added that at the initial stage, testimony would not be taken from police officers who were present at the scene.

Public Security Minister Amir Ohana, who oversees the police and was present at the event on Thursday just a few hours before the deadly stampede, called for an independent inquiry.

“It is clear an independent examination of all aspects related to the planning of the event will be needed, [including the] preparation, responsibilities, infrastructure  and the like,” Ohana said.

The tragedy occurred as thousands streamed through a narrow walkway that was covered with metal flooring and may have been wet, causing some people to fall underfoot during the rush for the exit.

Some apparently fell on the walkway and down a flight of stairs at its end, toppling onto those below and precipitating a stampede and fatal crushing domino effect.