An Israeli-made nasal spray appears to have contributed to a reduced COVID-19 infection rate among ultra-Orthodox members of a synagogue in Bnei Brak amid Rosh Hashanah festivities last year, a new trial has shown.

Of 83 worshippers who used the spray as instructed – before Rosh Hashanah prayers and for the following two weeks – just two contracted the highly contagious virus, in a real-world test of the substance which is designed to create a protective gel layer over the nasal mucosa to blocks viruses from infecting the nasal cells. The study was conducted by makers of the Taffix spray, Nasus Pharma, along with scientists from the University of Haifa, the University of Virginia, and the Hadassah Medical Center in Jerusalem. The full study was initially published in November 2020, with an updated version posted last month.

According to the study, Nasus Pharma approached a medium-sized synagogue community of some 250 members in Bnei Brak ahead of Rosh Hashanah in September 2020 to gauge their interest in participating in the trial involving the spray, which was touted as an extra layer of protection. Each member was eligible to collect a bottle of Taffix at the synagogue the day before Rosh Hashana prayers and received written instructions on the proper usage of the spray.

At the time, Israel was a world leader in the number of new COVID-19 cases per million citizens, and the infection rate among ultra-orthodox communities was double that of the general population. Since Rosh Hashanah is characterized by mass prayers in synagogues and family events, there were concerns about Jewish high holiday events as potential post-mass gathering outbreaks, especially in ultra-Orthodox communities. Before the holiday in mid-September, Bnei Brak’s positivity rates for COVID-19 were 17.6%, climbing to 28.1% two weeks later, the study showed.

Ultra-Orthodox Jews are pictured praying in a synagogue divided with plastic sheets in Bnei Brak, near Tel Aviv, amid measures put in place to stem the spread of Covid-19 on September 7, 2020. (Menahem Kahana/AFP)

“This is a community that has different priorities and values,” Nasus Pharma CEO Dr. Dalia Megiddo told The Times on Friday. “Although the government tried to explain and to enlist opinion leaders, it was very clear they were going to go to the synagogue come what may. So we said, ‘OK, this is going to be a super-spreader event.’”

At the end of the two-week trial, 81 of the 83 members of the synagogue who used the spray as instructed – every five hours whenever they left their residences for the following 14 days – did not contract the virus. The two who did get infected rarely used the spray, and the remaining members of the community did not use Taffix at all.

“These important results conform with prior in vitro studies performed with Taffix™ that proved its robust activity against the transmission of SARS-CoV-2 ,” Dr. Megiddo said in an announcement in October. “This is the first clinical real-life data showing that the use of Taffix is highly effective even in the worst-case scenario of a super spread event in the heart of the worst-hit city in Israel.”

In previous lab studies with Taffix, the spray was shown to be 99% percent effective in blocking viruses, including SARS-CoV-2, from infecting human cells, Nasus Pharma had indicated. The spray has been approved for use in Israel since last July and has a CE mark for use in Europe. 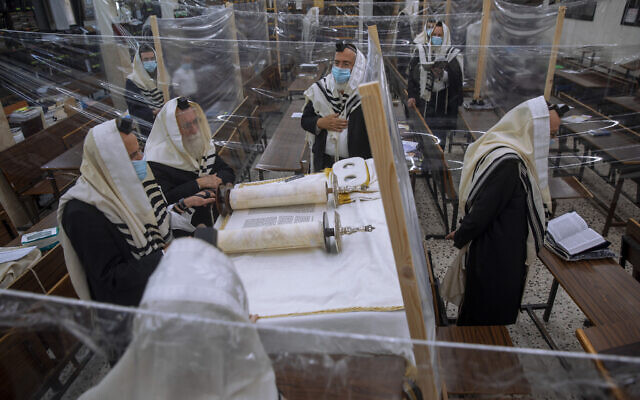 Ultra-Orthodox Jews during morning prayer in a synagogue during a nationwide three-week lockdown to curb the spread of the coronavirus, in Bnei Brak, Sept 21, 2020. (AP Photo/Oded Balilty)

Professor Yaakov Naparstek, the scientific director of the Meuhedet HMO Research Institute and a physician at Hadassah Medical Center in Jerusalem who co-authored the study said that “the fact that Taffix was able to significantly reduce infection rate in users of the product is very encouraging.”

“It may offer an additional layer of protection to people who encounter events that pose high risk of infection. The data contributes to our knowledge of the effect on population protection,” he went on, adding that additional controlled clinical studies will be needed to determine specific efficacy in different circumstances.

“Given the excellent safety profile of Taffix and its statistically significant efficacy in preventing infection following what is defined as high-risk infection event – it seems that this additional layer of protection can significantly reduce the risks of infection and may enable people to resume some part of their daily routine more safely,” the authors wrote. 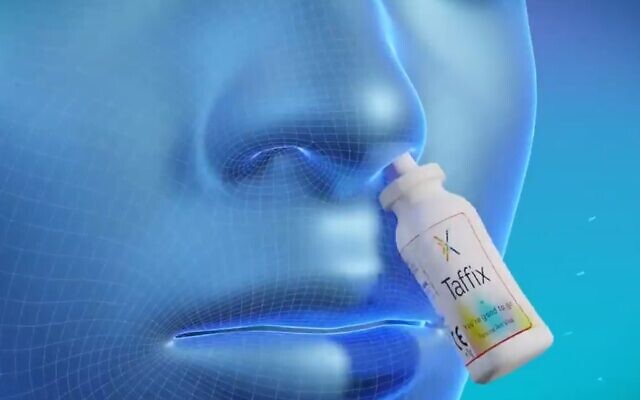 Nasus Pharma is a privately held clinical-stage biopharmaceutical company founded in 2019. Based in Tel Aviv, the company says it is developing a number of intranasal products aimed at assisting patients in several acute emergency situations such as opioid overdose and anaphylactic shock. In addition to Taffix, Nasus Pharma’s products include Intranasal Naloxone, heading to a phase II trial, and Intranasal Epinephrine, currently in phase II, as well as a number of preclinical products.