PEPINSTER, Belgium (AP) — Paul and Madeline Brasseur were at home with their two sons in the Belgian town of Pepinster when the water “came all of a sudden” late in the evening.

It “was like a tsunami,” the way it entered the house and kept rising instead of retreating, said Paul Brasseur, 42.

The family went upstairs and kept seeking safety during the night, as the water climbed steadily below them. They ended up on the roof, watching.

Eventually, making their way from rooftop to rooftop, they ended up perched on one with 15 other people, waiting hours for help to come. A boat arrived to rescue the children, but it began taking on water while a makeshift jetty started to collapse. Brasseur held his sons back.

“We held out, for those nine hours,” said Brasseur, who has lived in Pepinster since he was 10. “Then it was citizens, the father of my sons’ best friend who came… up over the rooftops and saved us, too.”

More than 180 people in Belgium and Germany didn’t survive the massive flooding that crashed through parts of western Europe on Wednesday and Thursday. Thousands of those who did, like the Brasseurs, found their homes destroyed or badly battered.

As the floodwaters subsided, attention turned to the gargantuan task of repairing the damage wrought by the storm-induced deluges — and to the immense losses faced by those in affected areas.

Residents and shopkeepers are trying to clear mud from their homes and move unusable furniture outside in Ahrweiler, western Germany, on Saturday, July 17, 2021. (Thomas Frey/dpa via AP)

In Bad Neuenahr-Ahrweiler, in western Germany, Andreas Wachtveitel spent Saturday clearing debris out of his apartment building. The 39-year-old’s home and office were submerged and badly damaged, so he doesn’t know what he’ll do next.

“This was the worst thing that’s ever happened to me,” said Wachtveitel, who was covered in mud. “Thank God everybody in our house is still alive, but it was close.”

The sounds of the water rushing into his building’s lower floors and of nearby screaming haunt him, he said.

“We heard screams from the other side,” Wachtveitel said. “There’s a clinic and the patients were trapped.” 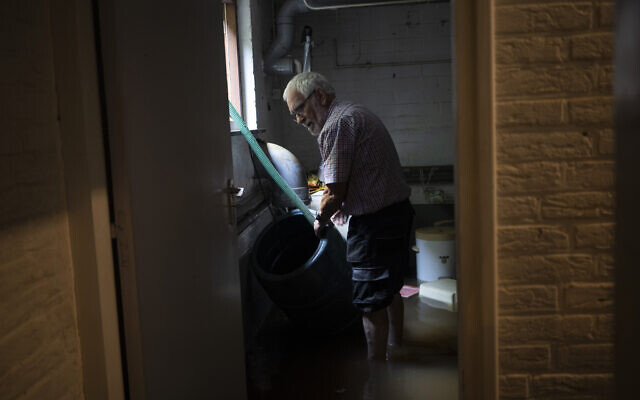 Wiel de Bie pumps water out of his flooded basement, in the town of Brommelen, Netherlands, on July 17, 2021. (AP Photo/Bram Janssen)

Franco Romanelli, who owns the Pizzeria Roma in the same town, stood in front of the restaurant that was his livelihood as workers cleared ruined furniture.

“It took such a long time to build the restaurant to get it where it is,” he said. “And now after the pandemic, this is catastrophic.”

Romanelli, originally from the Abruzzo region of Italy, came to Ahrweiler in 1979, when he was 15 years old. He said the extent of the damage in his adopted home is devastating. 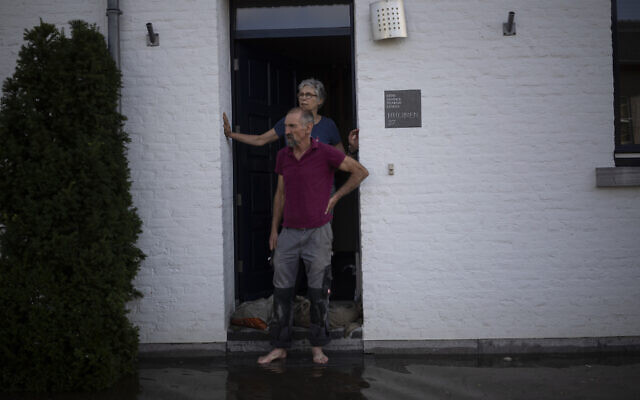 A coupe stands outside their home, in the town of Brommelen, Netherlands, on July 17, 2021. (AP Photo/Bram Janssen)

In the Netherlands, thousands of people who evacuated threatened areas on Thursday and Friday started to return home to survey the damage on Saturday.

In Brommelen, in the southern Netherlands, Wiel de Bie found his basement completely flooded. De Bie, 75, had carefully collected decades’ worth of old magazines, photos and important documents. All of them were in his basement. What hasn’t disappeared entirely is waterlogged and destroyed.

“Apart from the emotional value, which I find more important, magazines, radio bulletins from 1960 until 1997 all vanished,” he said, picking up a dripping copy of a magazine from 1924, as he pumped water out of the basement.

Down the street, the Kant family’s car still was partially underwater. A single rubber boot floated in their flooded garden. Professor Ijmert Kant, 62, said he was grateful for their safety. Still, he added, the task of cleaning up the debris and repairing their home was daunting.

“It’s all material. Nothing happened. People were spared, and I mean that,” Kant said, “But I’m not looking forward to the hassle of, ‘How do you repair this? How does it work with insurance?’”

In Belgium, Brasseur celebrated his 42nd birthday on Saturday. The occasion may have turned out nothing like the day he expected, but the important thing was that his family was safe and together, he said.

“My gift today,” Brasseurhe said, his voice breaking, “is that my family and all the friends who we were with are still alive.”