A man was charged at the Jerusalem District Court on Thursday for the attempted robbery of acclaimed Israeli chef Shalom Kadosh, who was seriously wounded during the incident last month.

Ali Adkidak, 41, from East Jerusalem, was indicted for robbery and grievous bodily harm. The prosecution asked that he be detained until the end of legal proceedings against him.

According to the indictment, Adkidak took Kadosh’s wallet from his car at a gas station while the chef was checking his tire pressure.

Kadosh, 74, chased Adkidak and grabbed his hand in an attempt to stop him.

Israeli chef Shalom Kadosh poses for a picture in Jerusalem on May 27, 2018. (Yonatan Sindel/Flash90)

“In order to escape with the money, the suspect turned and forcibly pushed the vehicle owner to the ground with his right hand, in order to free himself from his grip,” the indictment read, according to Channel 13 news. “As a result of his actions, Kadosh fell, hitting his head hard on the road and he suffered fractures to his skull and fractures to his neck.”

After the incident, Kadosh was rushed to Hadassah Ein Kerem Medical Center and remains in serious condition. Channel 13 news said he is sedated and on a ventilator. 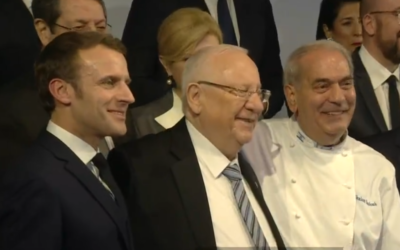 Adkidak has a prior criminal record and was recently released from prison, Hebrew media reports said.

The robbery reportedly took place hours before the wedding of Kadosh’s daughter.

Kadosh is considered one of the most well-known Israeli chefs, cooking for many world leaders.

In January 2020 he prepared the food for the World Holocaust Forum in Israel, which included 41 heads of state.