A suspected car thief broke into the Israeli Air Force’s Nevatim Air Base in the northern Negev Desert on Monday, after abandoning a car he had allegedly stolen from the nearby town of Dimona, prompting a massive manhunt, police and the military said.

“Police forces, assisted by the Israel Defense Forces, are searching the area,” police said in a statement. The IDF confirmed that it was on searching for a suspect.

Nevatim is considering the air force’s most important base, as it is home to Israel’s fleet of F-35 fight jets, the most advanced aircraft in the military’s arsenal, as well as several other advanced planes, such as the C-130J Super Hercules cargo plane.

The military said it did not believe there was a concrete threat to the F-35 fighter jets but had stepped up security around the aircraft.

Two new F-35 fighter jets land at the Nevatim Air Base in southern Israel from the United States on July 14, 2019. (Israel Defense Forces)

Nevatim is also a massive, sprawling facility, roughly the size of a city, which will make the search more difficult.

According to the military, the suspect drove through an open gate into the base, but punctured the tires on the security spikes on the road.

He then abandoned the car and took off on foot deeper inside the base.

Military helicopters were brought in to assist in the search, as were teams of the air force’s elite Shaldag special forces unit.

The effort was led by the commander of the air base, Brig. Gen. Omer Tishler. 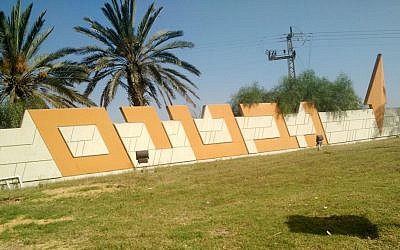 The entrance to the Nevatim Air Force Base in southern Israel on May 12, 2016. (Judah Ari Gross/ Times of Israel/File)

As a precautionary measure, the families of officers who live on the base were warned to stay inside their homes.

The embarrassing breach shed light on the holes in the security of what is meant to be a heavily guarded military facility and also demonstrated the degree of lawlessness in parts of southern Israel, where there is minimal law enforcement.