As the daughter of Holocaust survivors, Zurich resident Anita Winter has long related to those who endured the darkest chapter in Jewish history. Today, in her native Switzerland, she’s become a champion of the country’s dwindling number of living victims of Hitler.

Over the past year, Winter has spearheaded efforts to help Switzerland’s 400 Holocaust survivors better cope with adversity caused by COVID-19. Now, as the country’s pandemic situation improves, she’s focused on ensuring all survivors get vaccinated.

In March 2020, soon after COVID-19 hit Switzerland, Winter sprang into action. She created a phone hotline for survivors which is still operating around the clock, manned by 40 young volunteers, many of whom are not Jewish. Lending a compassionate ear, they also purchase food and medicine for survivors.

“The [COVID-19] pandemic evoked painful, war-era memories for many survivors,” Winter told The Times of Israel in a recent Zoom interview. “Some experienced renewed trauma, including the fear of lacking the essentials needed to survive. The increased loneliness and isolation have been particularly difficult for them given their past and their age.”

For many, the hotline is a godsend, especially for those who are homebound, handicapped and don’t have a computer or struggle in its use. In addition, Winter arranges financial assistance for those in need to cover medical bills and items such as hearing aids, dental treatment and walking aids.

“Equally important, we provide survivors time and, above all, the certainty they aren’t alone and their trauma will be understood,” says Winter, who contributes considerable monetary support to the well-being of survivors. “Helping them is a matter close to my heart.

As the head of the Gamaraal Foundation which she founded in 2014, 58-year-old Winter stands up for living victims of the Nazi regime and ensures their often harrowing stories are preserved and shared, especially with non-Jewish audiences. Donors to the organization include German descendants of those who carried out the Holocaust.

Long before COVID-19, Winter actively engaged with survivors, whose resilience and fortitude inspired her from a young age. Her volunteering to ease their plight and her work on Holocaust education recently earned her official recognition from Germany. In February, in a ceremony at the German embassy in the Swiss capital of Bern, Germany’s ambassador presented Winter with the Order of Merit, the highest tribute Germany pays to people for exemplary achievements in different fields. 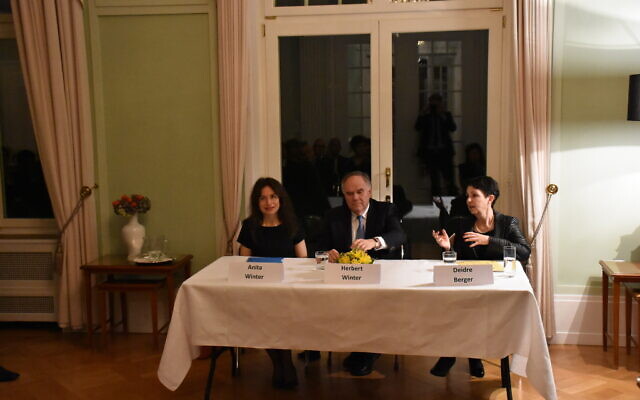 Anita Winter, left, at a panel at the Berliner salon at the German embassy in Bern, winter 2016. (Courtesy)

Winter’s decision to become formally involved with survivors by creating a foundation resulted from a conversation she had with current Jewish Agency head and incoming Israeli president Isaac Herzog. During a 2011 Jewish community event in Zurich, the former Israeli MK lamented to Winter that Israel hadn’t been more supportive of its Holocaust survivors, initially paying little attention to their trauma and other challenges they faced. For Winter, the conversation struck a chord.

Currently, despite a declining number of survivors — the youngest of whom is 82, the oldest 100 — Winter and her foundation are busy attending to their needs and developing Holocaust education based on their stories. One of the foundation’s main goals is genocide prevention. To that end, it develops programs, including bringing survivors to speak with students about their past experiences. Volunteers at the foundation help preserve survivor testimonies to keep the memory of the Holocaust alive. 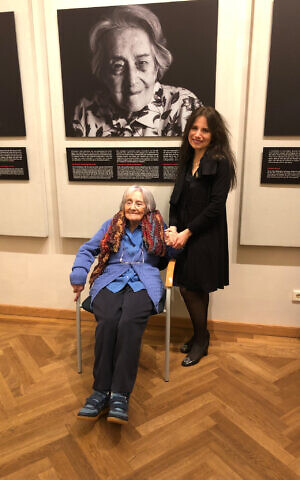 It also supports educational field trips to Auschwitz and other sites where the Nazi genocide took place. The foundation develops teaching aids to show students the consequences of the Holocaust, how survivors continued their lives and the impact of their experiences on their children and grandchildren.

Winter is proud of the multimedia traveling exhibition she initiated titled “The Last Swiss Holocaust Survivors,” which her four children worked on. Using photographs, texts and video, it tells the heart-wrenching stories of 14 survivors. Since 2017, it’s been shown in numerous countries in Europe, Asia and the United States, including at the UN headquarters in New York.

“We fight indifference every day, spreading the messages of the survivors, keeping their testimonies alive, educating the new generation,” says Winter, who speaks five languages including her mother tongue of German. “It’s crucial to continue doing it because the living legacy and the eyewitness testimonies of Holocaust survivors won’t be with us forever. We’re obliged to preserve their memories and spread the word.” 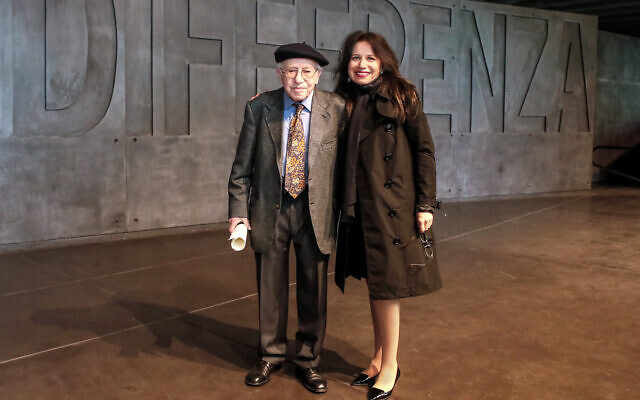 Anita Winter with Holocaust survivor Fishel Rabinowicz at the opening of the Foundation’s ‘Last Swiss Holocaust Survivors’ exhibit at the Shoah Memorial in Milan, Italy, May 2019. (Courtesy)

Born in Baden, a small German-speaking Swiss town near Zurich, Winter and her three siblings grew up there in the shadow of what their parents, both of whom were born in Germany, lived through just before and during World War II.

“According to studies of survivors, there are those who never speak about what they lived through and others who are the opposite,” says Winter. “I had both in my family. My mother didn’t say a word. It was like a taboo. My father spoke about it all the time because he wanted the next generation to know what happened so it will never happen again.”

Winter’s mother spent part of the war hidden in a monastery in France after escaping from a deportation train. Winter’s father experienced the growing persecution of Jews in Germany, including the Kristallnacht pogrom in November 1938, before fleeing the country and entering Switzerland thanks to an uncle already living there.

Not as neutral as it seemed

Collectively, the survivors Winter assists are a diverse, mostly Jewish group which includes other victims of Nazi persecution (Roma, Sinti, Jehovah’s Witnesses, homosexuals and political activists). She’s also discovered those who, hoping to spare their children a similar fate, never told them they were in concentration camps. Some don’t want to be included in the foundation’s list, preferring not to be identified as Jews because of their post-traumatic condition or for fear history will repeat itself. 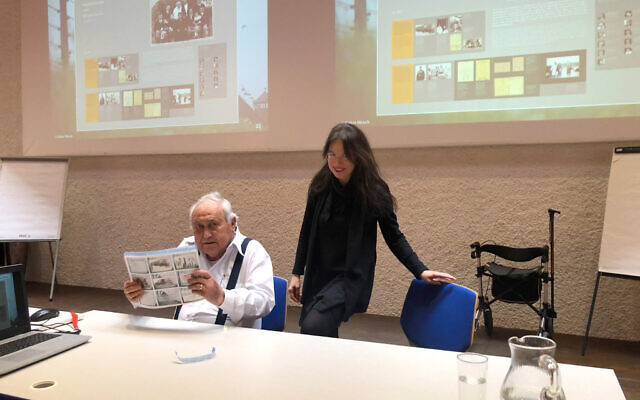 Anita Winter with Holocaust survivor Gabor Hirsch at a lecture in 2020. (Courtesy)

Most of the survivors are originally from other countries, having immigrated after WWII. Some endured concentration camps, others survived on the run or lived in hiding. A minority spent the war in Switzerland, whose official neutrality left it unscathed but not untainted, especially where Jews were concerned.

It took decades before the Swiss acknowledged their complicity in the Holocaust and collaboration with the Nazi regime. In 1995, in Switzerland’s first official admission of culpability, then-president Kaspar Villiger said, “We bear a considerable burden of guilt for the treatment of Jews by our country.” He admitted Switzerland had a secret pact with Hitler to bar Jews trying to cross the border to escape Nazi persecution.

In 1999, in a report commissioned by the Swiss government, an international panel of nine historians said Switzerland was an accomplice to the Holocaust, having turned away 25,000 Jews “in mortal danger” between 1940 and 1945. The panel acknowledged Switzerland also admitted 51,000 refugees during the war, including 20,000 Jews.

Switzerland’s ignoble actions toward Hitler’s Jewish victims didn’t end with the war. In the 1990s, it emerged that for decades Swiss banks and insurance companies had deliberately withheld large amounts of money from families of Holocaust victims who had accounts there. As part of their obfuscation to hamper recovery of those assets, the banks initially acknowledged a much smaller number of dormant accounts than the 54,000 later uncovered by researchers. 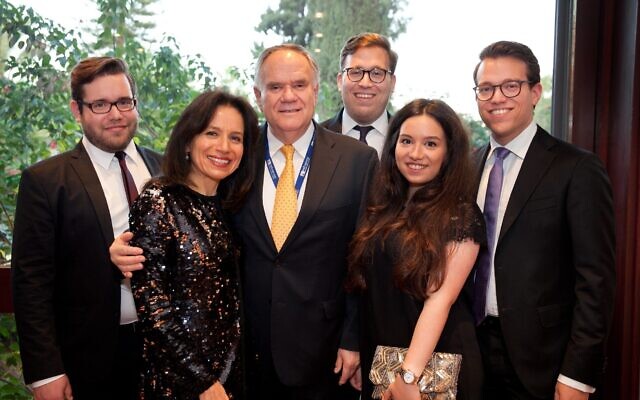 Anita Winter with her family at a ceremony for her husband, who received an honorary doctorate at Israel’s Weizmann Institute in November, 2014. (Courtesy)

Winter’s husband, Herbert Winter, an international business lawyer, played a key role in helping Holocaust survivors and their descendants recover these dormant accounts. Active in the World Jewish Congress and European Jewish Congress, he served for 12 years as president of the Swiss Federation of Jewish Communities, which represents the country’s 20,000 Jews. He’s currently assisting families to reclaim art and other cultural objects looted by the Nazis that belonged to their ancestors.

Defending Israel and the Jews

In addition to the foundation, Anita Winter assists other Jewish-related initiatives. For several years, she’s been a member of the Advisory Group to the Swiss Foreign Ministry regarding its delegation to the International Holocaust Remembrance Alliance (IHRA). Since 2014, she’s spoken regularly at the United Nations Human Rights Council (UNHRC) in Geneva representing B’nai Brith International.

In her most recent appearance on May 27, she deplored the UNHRC’s obsessive focus on Israel and its response to Hamas rocket fire. “Israel has not only the right but the duty to protect its diverse citizens from terrorism,” she said. “Yet this council, while ignoring countless atrocities worldwide, singularly critiques the most humane country in the Middle East.” 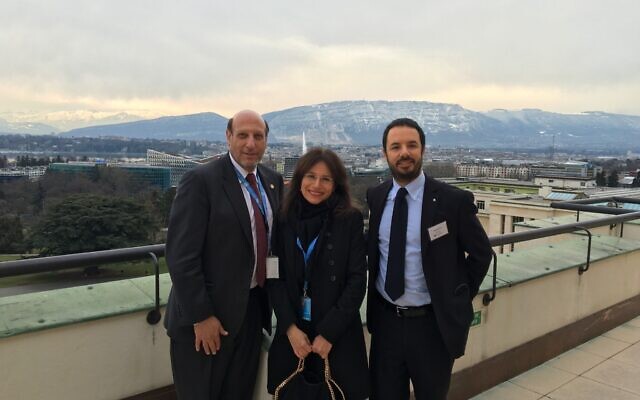 Anita Winter on the roof of the UN in Geneva with a B’nai Brith delegation. (Courtesy)

Winter attributes much of her motivation to her father.

“Even when we were children, my father told us about his past,” recalls Winter, who used to work in the family’s textile business. “He wanted us to never forget what people are capable of. It was important to him that we drew the right conclusions from his life story and the hardship he experienced. He always said something like the Holocaust could happen again and we have to be vigilant and ready to flee if the situation calls for it.”

She often accompanied her father when he spoke to students and other groups about what he lived through.

“After WWII, many people, including some Jews, believed the Holocaust would mean the end of antisemitism,” adds Winter, whose parents died a few years ago. “My father was much more pessimistic. He didn’t believe people had really learned from this break in civilization. He didn’t think people learn from history and get smarter. He’d often say, based on what he lived through, that the path from civilization to barbarism is short.” 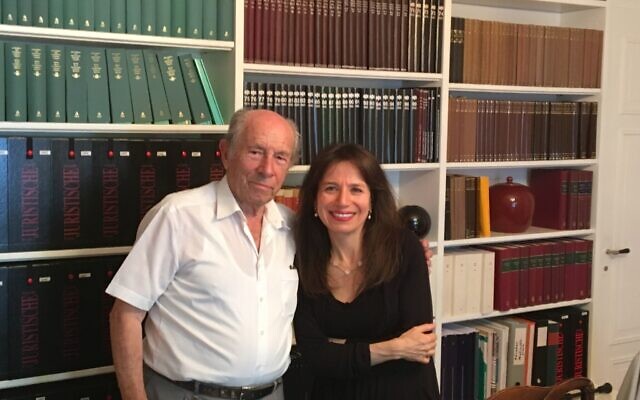 Initially, when asked how safe she feels as a Jew in Switzerland today, Winter didn’t answer.

“I feel secure in Switzerland,” she later responded. “Fortunately, despite growing antisemitism, it hasn’t come to physical attacks on Jews. But conspiracy myths surrounding the coronavirus and Jews are virulent in Switzerland, like elsewhere. We must be vigilant. We have a strong democracy and strong protection for minorities, which must be constantly maintained and protected. That’s why I work in the field of Holocaust education.”