Among the lesser-expected outcomes of last month’s flareup of violence between Israel and Hamas is a new line of apparel aimed at Jewish Gen Z-ers.

With slogans such as “Shabbat leftovers are sus,” and “The schnitzel slaps,” the T-shirts and hooded sweatshirts offered by Schlep & Schmoe might not immediately bring to mind Israel advocacy. In fact, people Millennial-aged or older may find them downright incomprehensible.

But for Tik Tok-savvy younger Jews, the inside jokes could be a shot in the arm at a time when anti-Israel and antisemitic sentiments appear to be gaining mainstream acceptance in the United States and around the world.

Schlep & Schmoe’s Philadelphia-based founder Shoshana Weiss, 29, said that coupled with all the fallout from the coronavirus pandemic, the latest round of violence in Israel was particularly trying for Israel supporters in the US.

“There were a lot of antisemitic events in Philadelphia, and it was really hitting close to home,” Weiss, who was raised Modern Orthodox, told The Times of Israel. “People were posting on social media and it was so divisive, and I thought what can I actually do to help out.”

A T-shirt with the slogan, ‘The Only Glow Up I Need,’ by Schlep & Schmoe. (Courtesy Shoshana Weiss)

Weiss said that young people who find themselves on college campuses or in other environments with few fellow Jews may be afraid to speak up in their own defense when confronted with antisemitism or anti-Israel rhetoric. She called the clothing a way for them to “showcase their Jewish pride.” The Yiddishized brand name is both accessible (“schlep” and “schmoe” are commonly used by American Jews) and tongue in cheek, she said.

While the world has already seen custom threads tailor-made for Members of the Tribe, Weiss said that her target demographic is a bit more niche.

Explaining that “sus” is short for “suspect” and that “slaps” is a good thing, Weiss said that “a lot of the shirts would really only resonate if you understood more traditional forms of Judaism, and you also understand Tik Tok trends.”

Weiss admitted that even she doesn’t fully get the meaning of all the references and occasionally avails herself of the wisdom of her three younger brothers, but said that the clothing line can connect young people to their Judaism in a way she hasn’t seen done before.

With a day job in corporate strategy at a major investment company, Weiss described Schlep & Schmoe as a passion project rather than a moneymaker. She’s been able to keep overhead — all of which she’s put up herself — reasonably low by designing all the shirts personally, doing her own work on the website and using an on-demand printing service rather than stockpiling an inventory of clothing.

After starting an Israel advocacy group at her alma mater Drexel University, Weiss said it has been difficult maintaining the same level of pro-Israel engagement as a post-graduation young professional. 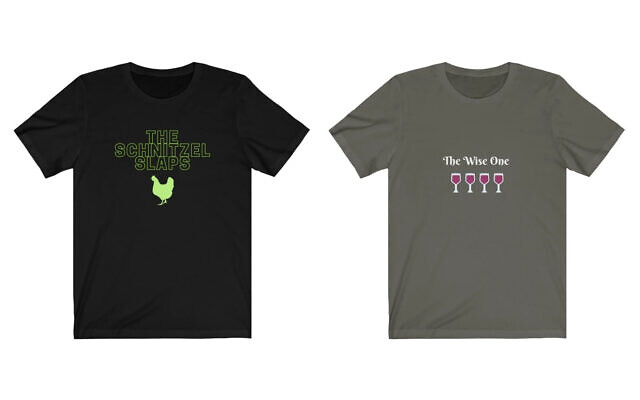 “It seems like the first step is you have to join a board, pay lots of money, and then somehow be in that capacity, but there’s no kind of middle ground,” she said.

“I’m trying to instill a strong Jewish sense of pride and identity in young Jews who may end up coming into contact with some anti-Israel rhetoric or antisemitism,” she said. “If they have that really strong Jewish core, they may feel more comfortable expressing their Jewish pride or talking about Israel.”