Over the past few weeks, tens of thousands of Israeli soldiers have passed through Jerusalem and its Old City, sometimes during the day, but mostly at night, as part of an annual ritual ahead of Yom Kippur on Thursday.

These are so-called Selichot tours, named for the traditional penitential and supplicant prayers said in the period before the Day of Atonement (some Jews start saying these a month before Rosh Hashanah, others the Saturday night a week or so before Rosh Hashanah).

For the Israel Defense Forces, these tours — mostly through Jerusalem, but also Safed and other cities — are not explicitly religious in nature, with even predominantly non-Jewish units taking part in them, but are instead meant to encourage contemplation and soul-searching, Lt. Col. Nadav Danino, the head of the Education Corps’ Jewish Awareness and Identity Division, told The Times of Israel last week.

“This is time for unit-wide introspection. This isn’t a debriefing that you do after an incident or an investigation after an exercise. This is time where we’re using the Hebrew calendar, this time between the Hebrew month of Elul and the month of Tishrei, a time of introspection,” Danino said.

“As a unit, how did we do? What goals did we reach? Where do we need to improve; what do we need to learn in order to be where we want to be next year?” he said.

The tours are formally led by the participating units’ commanders, but they are joined by civilian guides, who teach the soldiers about the history of Jerusalem and the Old City. “They often include a stop at a musician or a musical group, which plays either folk songs or ‘Selichot’ songs in order to connect the soldiers to this period and its atmosphere,” he said.

Israeli soldiers listen to a musical performance during a ‘Selichot tour’ of Jerusalem in September 2021. (Israel Defense Forces)

The tours also generally feature a talk, by a rabbi or a civilian lecturer, on Selichot or introspection-related themes, according to Danino.

“Most of these tours end at the Western Wall plaza, where soldiers can take their time and if they want; they can say Selichot, but the focus of these tours is to discuss the spirit of this time of the year,” he said.

By Yom Kippur on Wednesday night, upwards of 30,000 IDF soldiers will have gone on one of these tours, “from generals… to new recruits who enlisted a week ago,” he said.

Though the tours are held over the course of more than a month, nearly half of the soldiers — 13,500 troops split up into 70 groups — participated in one on a single night, September 5, the night before Rosh Hashanah.

While the overwhelming majority of the troops are Jewish, a not insignificant minority are not: non-Jewish immigrants from the former Soviet Union (or their children), Druze Israelis or Muslim Bedouin Israelis.

Though the tours are named for Jewish prayers, Danino stressed that no one is required to say them. (The Jewish Awareness and Identity Division itself was recently moved from being subordinate to the Military Rabbinate to the Education Corps.)

Danino added that a number of explicitly non-Jewish units, like the Bedouin Trackers Unit, ask to take part in the Selichot tours year after year.

“They don’t celebrate Rosh Hashanah at home, but they know that they are in the IDF and that this gives them the environment to stop and reflect. That’s what we try to do: to give people a platform to stop, to think and to evaluate themselves as a unit and not in terms of an event or as a training exercise or for a drill or for an operation. Happily, units that have a large number of non-Jewish members or non-Jewish commanders come and their reviews are very, very supportive and positive,” he said.

Danino said the tours have been able to continue more or less as normal despite the coronavirus, though the pandemic has added some logistical issues.

“This year — and last year — it’s a bit different because of the coronavirus,” he said. 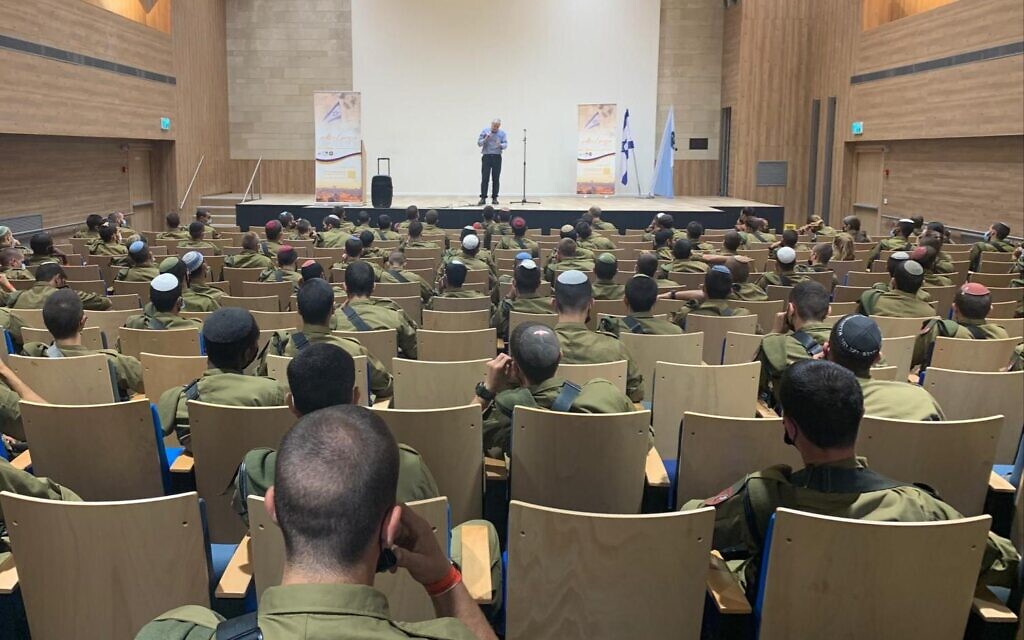 Israeli soldiers listen to a speech during a ‘Selichot tour’ of Jerusalem in September 2021. (Israel Defense Forces)

The tours are always largely held outside, but in non-pandemic years the speeches are typically held indoors, at Jerusalem’s Great Synagogue or another lecture hall. Instead, over the past two years, the lectures — in front of dozens or hundreds of soldiers — have been held in parks and other outdoor venues or in indoor halls with enough room for social distancing. “It’s not a small logistical challenge,” he said.

This year also saw a relatively large number of cancellations, due to fears about a coronavirus outbreak in a unit or because of an existing one. In the end, between 30,000 and 40,000 soldiers will likely take part, he said.