When Timna Nelson-Levy stepped on to the mat to face fellow judoka Daria Mezhetskaia in the bronze medal match of the mixed team event at the Tokyo Olympics, she could feel the pressure on her shoulders.

Israel’s judo delegation to the Games, considered to be among its strongest medal contenders, saw its members knocked out one by one in the individual matches all week long. But the mixed team event, making its Olympic debut in Tokyo, brought a shot at redemption.

Nelson-Levy, 27, competed fifth in the lineup against the Russian Olympic Committee, with three Israeli wins already in the books out of six rounds, giving her a shot at clinching the medal for the entire team.

“I was the deciding match,” Nelson-Levy told The Times of Israel in a recent phone interview. “When I walked up the stairs to the judo mat, I felt the pressure. I knew we could make history.”

And the moment that she won that match, securing a medal for every member of Israel’s judo team, “I was overwhelmed with joy, I couldn’t control my feelings — I was jumping up and down,” said Nelson-Levy. “I was just looking over my shoulder to my teammates and my coaches. I was just so happy to get my team and my coach this medal, because they all worked so hard for it and they all deserved it.”

Later that day, a bronze medal was hung around the neck of the entire Israeli team as the 11 judokas stepped onto the podium in Tokyo.

Members of Israel’s team pose with their bronze medals after the medal ceremony in team judo competition at the 2020 Summer Olympics, on July 31, 2021, in Tokyo, Japan. (AP Photo/Vincent Thian)

“It’s the biggest stage in the world and we brought a medal,” said Nelson-Levy. And while she has earned more than a dozen medals in international competitions, nothing, she said, compares to an Olympic medal.

“Because it’s the biggest stage in the world, it’s the competition that every athlete dreams of coming back from with a medal,” she said. “Not a lot do, so of course it is the most special feeling.”

Nelson-Levy is a native Jerusalemite, born to American parents who immigrated to Israel shortly after getting married. All of her extended family — as well as now two of her six siblings — live in the United States.

“We’re in really close contact with my American family, and you know in a way I do feel that I also represented America, and my cousins from America” at the Olympic Games, she said.

Growing up in Jerusalem with English-speaking parents, she said, “I didn’t feel like an outsider or anything — my parents taught me how to love Israel, and really to be a Zionist, and I think they did an amazing job with all of us.”

Her mother, Laura, a tour guide, named the future judoka after the Timna Park situated just outside of Eilat, which she visited while pregnant with her.

Nelson-Levy grew up with a foot in both worlds, she said — fully integrated into Israeli society but still connected to the American immigrant community of her parents, who are members of Kol Haneshama, a heavily American Reform synagogue in Jerusalem.

“Most of my parents’ friends are American olim, and we used to do holidays and Shabbat with them,” she said.

But even before the pandemic hit, Nelson-Levy, said she didn’t travel to America very often, since her time was consumed by judo practices, training camps and international competitions. But when she spoke to The Times of Israel a few weeks after returning home from the Olympics, she was about to depart to visit her siblings and other family currently living in the US — “and I can’t wait.” 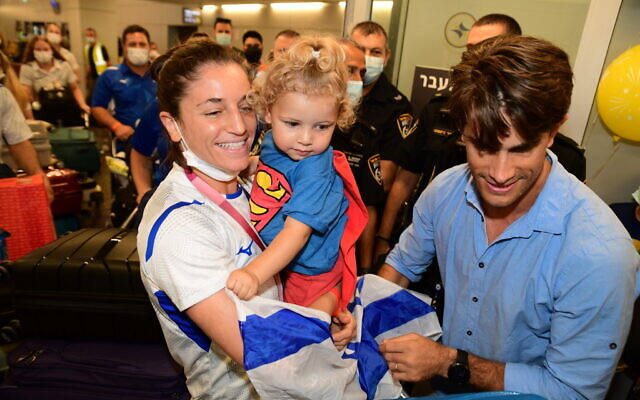 Nelson-Levy began dabbling in martial arts when she was just 6, trying out jujitsu and mixed martial arts before settling on judo at age 13. And even from a very young age, she said, she dreamed of one day competing at the Olympic Games.

“Even before I moved to judo I knew that this was something I wanted to do — I wanted to be an Olympic medalist,” she said. “That was my goal for as long as I can remember.”

Arriving in Tokyo last month for her first Olympic Games, she said, was the culmination of almost 20 years of dreams. But just participating, she said, was never the goal.

“My goal wasn’t just to get to the Olympics and say I was an Olympian,” she said. “My goal was really to come back with a medal.”

But after losing in the quarterfinal, Nelson-Levy was knocked out in the repechage round of the women’s under-57kg weight class, finishing seventh overall. Every other member of Israel’s judo delegation faced a similar fate, finishing out of medal contention despite high hopes.

But in the mixed team competition a few days later, they had a shot at redemption.

“We all said we expected more of ourselves in the individuals, but we still have a chance to be Olympic medalists,” said Nelson-Levy. “We’re such a strong team, we’re such powerful athletes — when we came out storming to the mat, we all felt that it was possible.”

While Nelson-Levy lost her first match against Italy, the Israeli team beat them 4-3 overall. She won her next match against a French competitor, but Israel lost 4-3 to the country, sending them to a repechage match against Brazil. Nelson-Levy won again, and Israel sent Brazil packing 4-2, clinching a spot in a bronze medal match against the Russian Olympic Committee.

After four rounds, Israel was leading 3-1 when Nelson-Levy stepped up onto the mat. And 3 minutes and 22 seconds later, she won the match, and the game, with an ippon against her opponent. 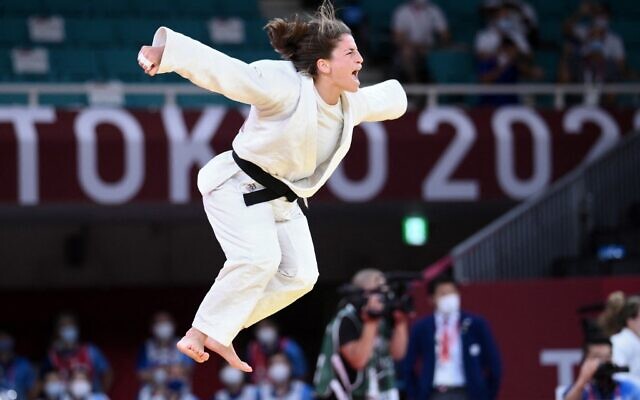 Israel’s Timna Nelson Levy celebrates winning the decisive bout in the judo mixed team’s bronze medal B match against Russia during the Tokyo 2020 Olympic Games at the Nippon Budokan in Tokyo, on July 31, 2021. (Franck Fife/AFP)

“Every time we went further and further, we said this can be ours, we can do this,” she recalled. “I think because we all were in the lowest place possible, we all lost in the most important competitions, we had a special power and we proved to ourselves, mostly, that it was possible — and we did come back as Olympic medalists.”

The team roared with celebration after earning its medals, and the joy and congratulations from around the globe began to pour in.

“I couldn’t even open my phone. I got hundreds of messages, if not thousands,” Nelson-Levy recounted. “People were really happy for me, really supportive… to get all that support and love and all the messages people sent — it meant a lot to me.”

Politics on the mat

While Olympic authorities work hard to make the Games an apolitical event, geopolitical tensions seep in every year — particularly where Israel is involved. Two judokas — Algeria’s Fethi Nourine and Morocco’s Mohamed Abdalrasool — pulled out of their competitions rather than face Israeli athlete Tohar Butbul in Tokyo.

“It’s not the first time that athletes from different countries don’t compete against us — it’s unfortunate but this is the situation and this is the reality,” she said. “My opinion is that we need to keep politics out of sport, out of any sport, period.”

She acknowledged that sometimes the athletes themselves are pressured by their governments or other forces to drop out of matches even if they would like to compete.

“Sometimes it doesn’t come from the athletes themselves, it comes from higher up,” she said, noting that “maybe the athletes do want to compete.”

Judo champions Iranian Saeid Mollaei, left, and Israeli Sagi Muki will be featured in an MGM TV series about their friendship. (Courtesy PR)

Nelson-Levy said she is friendly with Saied Mollaei, the Iranian judoka who made headlines around the world when he refused orders from Iran to throw a match in order not to have to compete against Israeli Sagi Muki. Mollaei ultimately defected from Iran, acquired Mongolian citizenship and struck up an unlikely friendship with Muki; the pair reunited in Tokyo last month.

“He’s an outstanding athlete and an even greater person,” she said. “When I see him we always say hello and chat. He sends me congratulations and good luck messages.” Nelson-Levy said Mollaei’s actions were “a heroic thing — and I really look up to him and what he did.”

With one Olympic medal around her neck — and more than a dozen other medals in her collection — Nelson-Levy has already set her sights on future goals, just as soon as she’s done with her US vacation.

And while the judoka wants to continue competing in the sport internationally — including at the Paris 2024 Olympics — she acknowledges that there are financial difficulties involved.

While Israel’s other Tokyo bronze medalist, taekwondo competitor Avishag Semberg, will receive NIS 250,000 from the Israel Olympic Committee for her achievement, each member of the judo delegation will receive just NIS 50,000 for their win. And while some Israeli Olympians have multiple high-dollar sponsors, others have few to none, and get by on a small stipend.

“It would definitely make my way to Paris much easier,” she said of future sponsorships.

But either way, Nelson-Levy has 2024 in her sights.

“I’m definitely thinking about going to Paris,” she said, “but there’s a lot of steps along the way.”