Last year, Israel Festival director Eyal Sher had to postpone the annual June celebration until September. When a smaller, more intimate version of the festival finally took place, it also offered online viewings of the performances.

This year, the festival is back onstage, June 3-19, and celebrating its 60th year with a roster of some of Israel’s best-known artists who encompass the country’s cultural landscape.

Still, about half of the festival events are missing this year, said Sher, since six to ten shows are usually brought to Israel by international artists.

There also won’t be a major concert staged in Jerusalem’s Sultan’s Pool arena.

“We’re so missing that kind of experience,” said Sher. “But we feel that it’s exactly the right size and context for this period that we’re in. I don’t feel like it’s time for major events. We need things to be relevant to the period in which we’re living.”

Dudu Tassa and the Kuwaitis at the rescheduled, smaller 2020 Israel Festival in Jerusalem (Courtesy Yoel Levi)

While Israeli cultural institutions were allowed to reopen in March, they’ve done so gradually, as operas and plays began rehearsing and musicians took to stages in front of smaller, socially distanced audiences.

Sher generally plans the Israel Festival at least a year in advance, but this year he and his staff waited to see how Israel’s vaccination plan would proceed before setting any dates.

“It was very clear that we couldn’t have any international artists, just like last year,” he said.

Even once the dates were firm, “you continue doing risk management all the time,” said Sher.

As well as the lack of international artists in attendance, there won’t be large or standing room-only events. Audiences will be small, in capsules, and only seated, in configurations that they had already mastered during the rescheduled September 2020 Israel Festival.

Unlike last September, the organizers decided against live-streaming the performances, believing that most of their audience can and will come out to live shows.

“We didn’t think it was a time for wild celebrations, but we wanted a solid program that would celebrate all kinds of artists and pay tribute throughout the generations,” said Sher.

Instead, it’s a homegrown Israel Festival, with a steady stream of known and lesser-known Israeli artists, all of them offering their take on 60 years of Israeli culture.

The resulting pairings are creative, such as pianist Shlomi Shaban ruminating over the goat paintings of Menashe Kadishman, the choreographer Rina Sheinfeld dancing to the video work of Michal Rubner, and theater artist Gilad Kimchi rethinking the classic Yehudit Ravitz song, “The Prettiest Girl in the Kindergarten.”

The same goes for the participating dancers, theater performers, video artists and poets; their works for the festival are all unique and original, created for this year’s Israel Festival.

The result is four different evening shows, each with eight to ten performances that move from one medium to another, shedding light on the artists who inspired the performers.

Another of the festival’s central events is Routine 2.0, artistic residencies that took place in unexpected locations, including a supermarket, a center for youths who left the ultra-Orthodox world, the Education Ministry building, and an experimental high school.

It’s a continuation of a similar program that the festival has embarked on before, which took on greater meaning last year when it was one of the few performances the festival could continue with during the pandemic.

At the end of the residency, the artists perform an artistic action that involves the community, offering a fresh perspective on the daily routine. 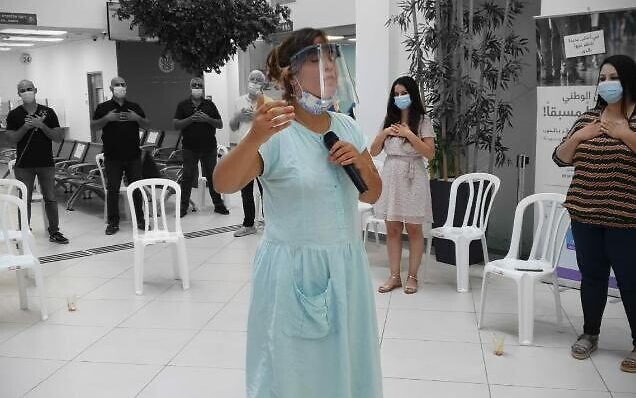 Along similar lines, there will also be Home-Spirit-Hospitality, in which seven artists and seven Jerusalem-based families invite audiences to visit the artistic-family spaces they have created together.

The festival will feature headlining artists as well, including musicians Berry Sakharof, Corinne Allal, Eran Tzur, Efrat Ben Tzur and Kfir Ben Laish with Ehud Banai, in the premiere of “The Golden Calf,” a new version of Banai’s classic song produced with The Refugees.

The Jerusalem East and West Orchestra, conducted by Tom Cohen, will present a musical tale based on the children’s book “Waiting for Nissim,” with authors Etgar Keret and Shira Geffen onstage.

The only performance that features an artist from abroad is “Macho Man” by Spanish video artist Alex Rigola. The work is about the harsh realities of gender violence, and will bring small groups of audience members equipped with earphones through a maze-like installation that confronts them with the conditions that allow sexual and gender violence continue in society.

“It’s a very moving and deep experience,” said Sher, who had the installation adapted to Israeli realities.

Following in the festival’s tradition of staging performances in unusual locations, Public Parking hosts seven leading choreographers in an underground parking garage, where they will present site-specific works with dancers and musicians from Jerusalem’s Academy of Dance and Music.

There will also be the Festival’s signature classical music series at the Eden-Tamir Center in Ein Kerem, featuring four concerts by classical musicians, following in the tradition of the classic works featured in the festival’s early years.

Tickets go on sale Monday, May 3, through the Israel Festival website.