Three countries have approached Israel to request the 1 million doses of the Pfizer vaccine that were part of a deal canceled by the Palestinian Authority, the Haaretz daily reported Sunday.

Citing a diplomatic source, Haaretz said the three unnamed countries had requested all the doses should the deal with the PA fall through. The official said Israel was currently talking to them about supplying the 100,000 doses that were returned by the PA and expire in July.

If an agreement is reached it would be under the same terms as the deal with the Palestinians, whereby Israel would be repaid out of future vaccine shipments to those countries. the deal would need the approval of Pfizer.

Meanwhile, the PA Health Ministry said on Sunday that it will seek to renegotiate the terms of its recent one million coronavirus vaccine dose deal with Pfizer and the Israeli Health Ministry, hoping to receive Pfizer vaccines from Israel that do not expire until the end of July.

Israel announced the planned transfer on Friday and immediately sent an initial shipment of 100,000 vaccines to Ramallah. Under the terms of the deal, Israel was handing over its soon-to-expire vaccines in exchange for an equivalent part of the PA’s shipment of fresh Pfizer vaccines, which are scheduled to arrive later in 2021.

Ramallah has been slow to roll out its coronavirus vaccine response, and fewer than one-fifth of West Bank Palestinians are currently vaccinated. But the PA canceled the deal on Friday night, claiming that the vaccines it received did not meet its safety standards as they were set to expire in just ten days, at the end of June.

“We won’t use them, and they will be returned [to Israel],” said PA Health Minister Mai al-Kaila at a press conference.

The Palestinian Authority will now seek to receive Israeli vaccines from Pfizer that do not expire until the end of July, al-Kaila told the official PA WAFA news agency on Sunday.

Al-Kaila said an Israeli delay in accepting Ramallah’s conditions precipitated the PA’s decision to cancel the deal. Al-Kaila said the deal had originally been concluded last May, with the notion that the vaccines would arrive at the end of the month.

“After the Israeli side stalled and the delivery of the vaccines was delayed until the day before yesterday, their expiration date neared, so we refused to accept them and returned them to the Israeli side,” al-Kaila said.

According to al-Kaila, Israel had sought to set two conditions for the transfer of vaccines: first, that no doses would go to Palestinians in the Gaza Strip, which is ruled by the Hamas terror group; second, that the loan agreements would not designate the Palestinian Authority as “the State of Palestine,” as the body often refers to itself in official documents.

A Palestinian laborer who works in Israel receives his first dose of the Moderna COVID-19 vaccine at a coronavirus vaccination center set up at the Gilboa checkpoint crossing between Israel and the West Bank city of Jenin, March 8, 2021. (AP Photo/Ariel Schalit)

Israel rejected the assertion, saying that the vaccines were “identical in every way to the vaccines currently being given to citizens of Israel.”

While life in Israel has largely returned to normal, the Palestinians have struggled to vaccinate their public. They have cobbled together a response based largely on the international COVAX vaccine-sharing initiative through the World Health Organization.

Al-Kaila said on Sunday that Ramallah has a series of agreements with the Pfizer pharmaceutical company to receive tranches of doses between now and the end of the year: 1,795,000 between July and September and 2 million between October and December.

But those shipments were not expected to arrive on time, al-Kaila said, due to “global demand for the vaccine.”

According to the PA Health Ministry, 446,564 Palestinians had received at least one dose of a coronavirus vaccine as of Saturday night, around 11 percent of the Palestinian population.

Those figures include the more than 100,000 Palestinian workers that Israel has vaccinated since March. Another 52,000 Palestinians in the Gaza Strip have been vaccinated, mostly with Russian Sputnik V vaccines provided by the United Arab Emirates.

Israel has until now refrained from initiating a campaign to vaccinate the general Palestinian population, despite calls from Israeli nonprofits, a petition to the High Court of Justice, and senior health experts’ urgings that it do so. 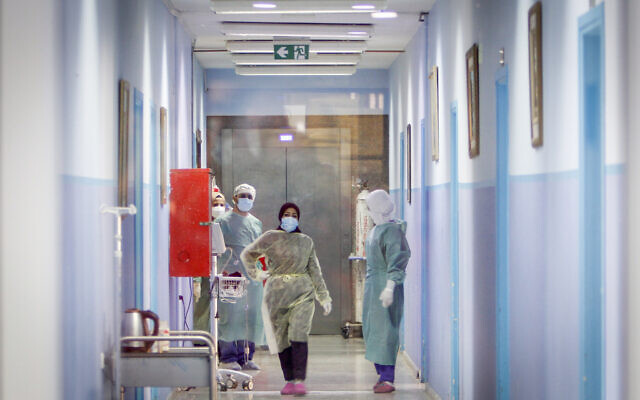 Palestinian health workers at a hospital in the West Bank town of Nablus, where health workers were vaccinated against the coronavirus disease (COVID-19) earlier today, after the delivery of vaccine doses from Israel. February 3, 2021. (Nasser Ishtayeh/Flash90)

Israel has maintained that under the Oslo Accords, the Palestinians are responsible for immunizations in the West Bank. Gaza, meanwhile, is controlled by the Hamas terror group.

The Palestinians suffered their worst COVID-19 wave in March and April, which peaked at almost 3,000 new cases a day. However, following a strict lockdown, figures have dropped to some 250 cases daily.