Joint List MK Ahmad Tibi on Thursday walked out of the traditional Knesset ceremony for Holocaust Remembrance Day in which the names of victims are recited, in protest of the participation of new far-right lawmaker Itamar Ben Gvir of Religious Zionism.

Ben Gvir, 44, is a disciple of extremist rabbi Meir Kahane and head of the neo-Kahanist Otzma Yehudit party, which merged into Religious Zionism before the election.

When he took the stage to recite the names of Iraqi Jews sent to Auschwitz, Tibi walked out in protest.

Tibi explained later that “I will never legitimize a racist who denies my and my people’s human rights.”

“We will fight against violence, against racism and against fascism,” he wrote on Twitter.

A rabble-rouser activist in his youth, Ben Gvir spent many hours in court as a defendant before passing the bar and going on to represent ultra-nationalist Jews accused of perpetrating racially motivated attacks against Arab Israelis and Palestinians.

Ben Gvir, who entered the Knesset after repeated failed attempts, has vowed to act in parliament on behalf of IDF soldiers who he claims are afraid to shoot at Palestinians throwing rocks or Molotov cocktails because they’re worried about the legal repercussions. He has also said that he will demand the creation of the position of minister of defense of the Negev and the Galilee for himself, claiming residents of those areas routinely suffer from violence by unchallenged Arab gangs.

Ben Gvir shot back that Tibi “insulted the memory of the survivors and victims,” alleging that the Ta’al faction leader is “a terror supporter who shouldn’t be in the Knesset.”

Tibi, a senior member of the predominantly Arab Joint List party and chair of its Ta’al faction, is known for his harsh criticism of government policies toward Israel’s Arab citizens and toward Palestinians. In 2012 he was widely criticized for accusing Israeli soldiers of being “child-murderers.” Hardline lawmakers frequently brand the veteran MK, a former adviser to Palestinian leader Yasser Arafat, a fifth column in the Israeli legislature. 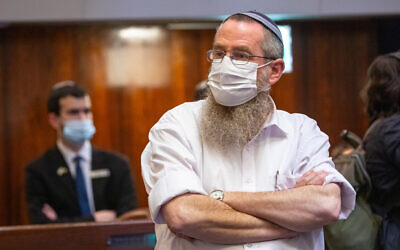 New Knesset member Avi Maoz seen at the Knesset ahead of the opening session of the new parliament, April 5, 2021. (Olivier Fitousi/Flash90)

At another point during Thursday’s ceremony, one of the guests berated Maoz, the head of Religious Zionism’s Noam faction.

“Aren’t you ashamed to take part in such a ceremony for those who were burned in the Holocaust? It’s a pity you are alive and that your parents weren’t burned there,” the person said, Hebrew-language media reported without naming him.

Maoz later filed a complaint with the Knesset Guard.

Maoz’s party, which also merged into Religious Zionism ahead of the March 23 election, burst onto the political scene in 2019 with a series of provocative highway billboards and video ads with the slogan “Israel chooses to be normal.” The party claims that the LGBT community has “forced its agenda” on the rest of Israeli society, which believes in a “normal” (heteronormative) family structure.

Earlier this month the party released a series of conditions for coalition negotiations, demanding radical reforms including rolling back protections on gender equality.