A top campaign adviser to Naftali Bennett suggested in an interview on US television on Sunday night that Bennett has evolved beyond his past inflammatory comments, and will continue to do so when he becomes prime minister.

George Birnbaum, a US political consultant and strategist who worked for Bennett’s campaign ahead of the 2021 Israeli national election, appeared on “The Mehdi Hasan Show” on MSNBC to discuss Bennett’s expected ascension to the Prime Minister’s Office.

The Knesset will vote by June 14 on whether to approve the new eight-party coalition that would remove Prime Minister Benjamin Netanyahu from power. The prospective government would see Bennett serve as prime minister for two years, followed by Yesh Atid leader Yair Lapid.

Questioned by Hasan about Bennett’s past rhetoric and his strong opposition to a Palestinian state, Birnbaum said he expects that, as prime minister, Bennett will adopt a more moderate approach.

“He certainly has been very hawkish in the past,” Birnbaum said, “but I’ve seen him evolve as a leader, as a politician, as a man, and I think the weight of leading a country like Israel is on his shoulders, he’s feeling it, and I think he’s going to be very responsible.”

Birnbaum, who previously worked for Prime Minister Benjamin Netanyahu and once served as his chief of staff, compared Bennett to former prime minister Ariel Sharon, a hawk and strong settlement supporter who later orchestrated the 2005 disengagement from Gaza.

“Rhetoric is easy when you’re not in power. It’s a little bit different when you have to govern, and you do now have the weight of people’s lives on your shoulders, the decision-making power to either promote peace or promote war,” Birnbaum said.

Hasan asked Birnbaum about Bennett’s history of remarks about Palestinians, including past comments to Joint List MK Ahmad Tibi that “when you were still swinging from trees, we had a Jewish state here.”

In response, Birnbaum pointed to Bennett’s agreement to serve in a coalition alongside Mansour Abbas, head of the Islamist Ra’am Party.

“Both of them had to put the interests of the State of Israel ahead of their own personal interests,” said Birnbaum. “I’m hopeful, given the fact that Naftali Bennett has been put in this position, that he’s now sitting in a coalition with Mansour Abbas — that the two of them will be talking to each other, they’ll be working together, they’ll be getting to know each other — that will help Naftali Bennett evolve as a person, as a leader, and give hope both to the Jews and the Palestinians living in the region.”

Asked about the possibility of a two-state solution, Birnbaum said it was not something he had discussed with Bennett over the past year. But he suggested a “change in the status quo” was a possibility.

“If you have a government that is made up of such a broad ideology that this government will be made of, that there should be hope for both Jews and Palestinians that there can be a change in the status quo, however you characterize that status quo.” 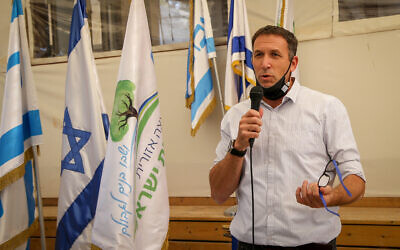 MK Matan Kahana speaks during a visit to the Oz Vegaon nature reserve in Gush Etzion, on October 22, 2020. (Gershon Elinson/Flash90)

But Bennett loyalists in Israel have pushed back against the suggestion that the prime minister-designate’s positions or policies will change once he is in office.

In an interview with Ynet on Monday, Yamina MK Matan Kahana — who is expected to serve as religious services minister in the next government — said Bennett’s views are not flexible.

Kahana noted that the incoming coalition is made up of “right, center and left,” but added that: “none of the sides can take their ideology to the extreme. The status quo on a lot of issues will probably remain.” Kahana added that “things that haven’t been solved in 73 years probably won’t be solved in the next government.”

In an official response, the Yamina party claimed that Birnbaum’s comments “were his own opinion and made in his name only. He no longer advises us. Bennett’s values remain and will remain as they are.”

However, Birnbaum was spotted meeting with Yamina No. 2 Ayelet Shaked in the Knesset on Monday.

Bennett is widely expected to be sworn in as prime minister, once a vote on the incoming coalition is held in the Knesset. Knesset Speaker Yariv Levin formally notified the parliament on Monday that Lapid had succeeded in forming a new power-sharing government, but did not give a date for the swearing-in, which must by law take place no later than June 14.

The new eight-party coalition that would oust Netanyahu’s current transitional government is set to hold a razor-thin majority of 61 lawmakers out of the Knesset’s 120, meaning that the defection of a single lawmaker could thwart it.