House Foreign Affairs Committee chairman Gregory Meeks is considering sending the Biden administration a letter in the coming days requesting that it delay a $735 million sale of precision-guided missiles to Israel.

Meeks wants the delay in order to give his panel time to review the purchase, a congressional staffer told The Times of Israel on Monday.

Democrats on the committee met earlier today to discuss the ongoing violence in Israel and Gaza, and one of the members raised a Washington Post report that broke the story on Biden’s advancing of the weapons sale at the beginning of the month, the staffer said.

Congress was notified of the proposed sale of the precision-guided munitions on May 5, at least six days before Palestinian terrorists in Gaza began firing rockets toward Israel, The Washington Post reported. But several members said during Monday’s meeting that they had been unaware of the announcement.

Meeks responded that he was weighing a delay request in order to provide adequate time for the panel to weigh the sale, the staffer said, adding that members of the committee were split on the decision.

The chairman, who has been endorsed by the pro-Israel lobby AIPAC, has long been seen to be aligned with more moderate Democrats. Other moderate Democrats on the panel like Ted Deutch and Kathy Manning rarely criticize Israel. Those backing a delay or blocking of the purchase, including Rep. Ilhan Omar, have been far more critical of the Jewish state.

Lawmakers have 15 days to object to the sale from when the administration officially notifies them.

The Post said some Democrats who are critical of unconditional aid to Israel are now pressing for details and may hope to use the sale as potential leverage to broker a ceasefire in Gaza.

“Congress must intervene and stop the sale of these weapons,” tweeted Omar.

Congress must intervene and stop the sale of these weapons. https://t.co/RxkrcwXNBL

“Allowing this proposed sale of smart bombs to go through without putting pressure on Israel to agree to a ceasefire will only enable further carnage,” one Democratic lawmaker on the House Foreign Affairs Committee told the Post.

In a sign of Israel’s diminished status as an issue of consensus in US politics, there have been increasing calls within Democratic ranks to stop providing military aid to Israel unconditionally.

Last month, prominent progressive senators Bernie Sanders and Elizabeth Warren both used their addresses at the J Street lobby’s national conference to call for regulating US aid to Israel, asserting that such assistance should not be allowed to bankroll Israeli policies that damage prospects for a two-state solution. 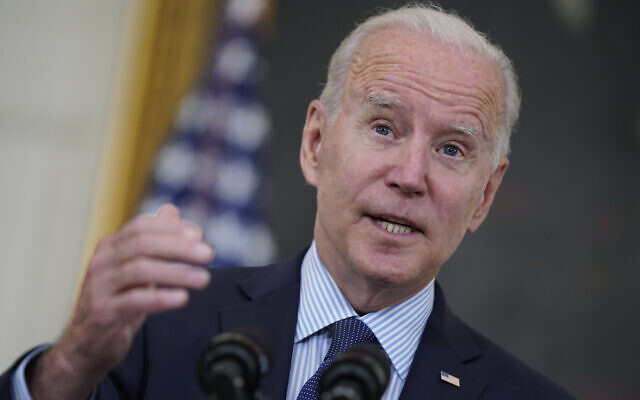 US President Joe Biden in the State Dining Room of the White House, in Washington, May 4, 2021. (AP Photo/ Evan Vucci)

However, around that same time more than three-quarters of the House members expressed their opposition to placing any conditions on US aid.

Prior to the 2020 US election, then-Democratic vice presidential candidate Kamala Harris said that a Biden administration would not place conditions on American aid to Israel.

Palestinian terrorists in Gaza have fired over 3,200 rockets toward Israel since the outbreak of fighting with Gaza last Monday, according to the Israel Defense Forces.

Ten people in Israel, including a 5-year-old boy and a 16-year-old girl, have been killed in the rocket fire, and hundreds have been injured.

Israel in turn, has struck hundreds of buildings in the Gaza Strip using precision missiles. The military maintains that the targets it struck are all assets of Hamas or other terror groups.

In total, 200 Palestinians have been killed in Gaza, including at least 59 children, and more than 1,300 wounded. Israel says many of the dead were combatants and that some were also killed by errant rockets fired by terror groups. 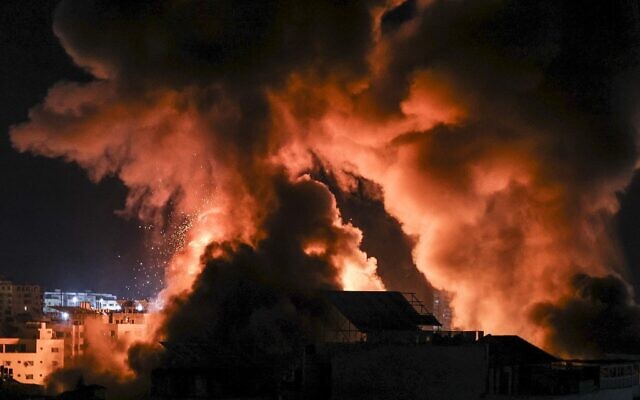 Explosions light up the night sky above buildings in Gaza City as Israeli forces carry out strikes on the Palestinian enclave, May 18, 2021. (MAHMUD HAMS / AFP)

Prime Minister Benjamin Netanyahu spoke with US President Joe Biden on Saturday and again on Monday about the ongoing escalation in violence between Israel and terrorists in the Gaza Strip and said the IDF was doing everything possible to avoid harming civilians.

Senate Majority Leader Chuck Schumer on Monday joined dozens of Democratic lawmakers — and one Republican, and independent, Sanders — in calling for the ceasefire by both sides. A prominent Democrat, Rep. Adam Schiff, the House intelligence committee chairman, pressed the US over the weekend to get more involved.

“We oppose our money going to fund militarized policing, occupation, and systems of violent oppression and trauma,” Bush tweeted.

But Senate Minority Leader Mitch McConnell, R-Ky, took the Senate floor on Monday to assail lawmakers for including Israel in their demands for a ceasefire.

“To say that both sides, both sides need to de-escalate downplays the responsibility terrorists have for initiating the conflict in the first place and suggests Israelis are not entitled to defend themselves against ongoing rocket barrages,” McConnell said.

In a shot at Democrats, McConnell said, “The United States needs to stand foursquare behind our ally, and President Biden must remain strong against the growing voices within his own party that create false equivalence between terrorist aggressors and a responsible state defending itself.”

Sen. Rick Scott, R-Fla., led 19 Republican senators releasing a resolution supporting Israel’s side of the fighting. They plan to try to introduce the legislation next week.

Times of Israel Staff and AP contributed to this report